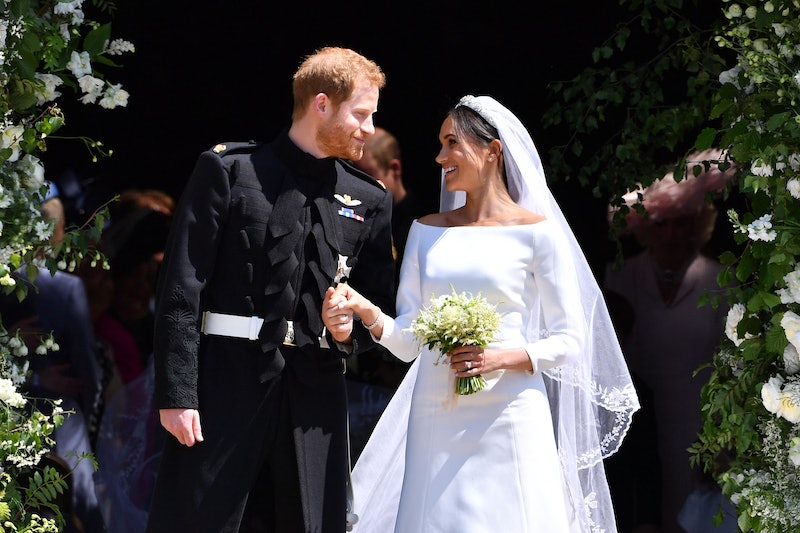 Prince Harry and Meghan Markle’s new docuseries isn’t only filled with juicy revelations. On the finale of Netflix’s Harry & Meghan, the Duchess of Sussex read the speech that she made at the reception of her and Harry’s 2018 royal wedding. In Episode 6, Meghan acknowledged how “atypical” it was for the bride getting married in the United Kingdom to make a wedding speech. “Very,” the Duke of Sussex affirmed to his wife.

Meghan began by explaining to her wedding guests (including Oprah Winfrey, Serena Williams, and Priyanka Chopra) why she decided to write a speech. “Onto the crux of why I wanted to speak tonight. First of all, it’s been a while,” she began, noting in the interview how that joke got a “big laugh” from guests. “But mostly, I wanted to share a story, a story that I wrote about the man that I love and the way that we met. Let’s call this a modern fairytale.” The bride went on to describe how the newlyweds came from two different worlds — both philosophically and geographically — but almost immediately knew that they “didn’t want to be independent from each other.”

Just like Meghan and Harry’s journey within the royal family, it seems like the couple bucked royal tradition at their wedding and did exactly what they wanted, which included Meghan speaking at the event. Read the full wedding speech below:

Once upon a time, there was a girl from LA. Some people called her an actress. And there was a guy from London. Some people called him a prince. All those people didn’t fully get it, because this is the love story of a boy and a girl who were meant to be together. They meet on July 3, 2016, in London, and they giggle endlessly. So the next day, they have their second date and he brings her cupcakes because it’s Fourth of July. “A bittersweet celebration,” he says. “Ironic really. Her country’s independence from his country.” Yet in this moment, they know that they don’t want to be independent of each other. And after a month of long-distance courtship, they settle into the quiet of Botswana. And amidst whatever momentary worries that creep in, they look at each other and think, “Whatever, world, we’re in.” They would love, and garden, and travel, and laugh, and rack up more air miles than any couple could have. And when the tides were rough, they squeezed each other tighter. “Nothing can break us,” they say. “For this love, she was a fighter.” I appreciate, respect, and honor you, my treasure, for the family we will create and our love story that will last forever. So I ask you to raise a glass to the astounding assurance that now life begins, and the everlasting knowing that above all, love wins.

In the first three episodes of Harry & Meghan, the couple shared new details from their special day — even the ones they don’t entirely remember. “I just really wanted the music to be fun, even our first dance,” Meghan said, before admitting that they can never remember the name of their first dance song. As producers then confirmed, the song was “Land of 1000 Dances” by Wilson Pickett, which played as photos from their exclusive Frogmore House reception flashed onscreen.

“It was so fun,” she said. “Just spinning like a whirlwind, it was so great.”

More like this
Brittany Snow Files For Divorce From Tyler Stanaland After 'Selling The OC' Drama
By Grace Wehniainen and Radhika Menon
Prince Harry Incorrectly Recites Christina Aguilera’s “Genie In A Bottle” Lyrics
By Jake Viswanath
Everything To Know About 'The Real Housewives Ultimate Girls Trip' Season 4
By Jake Viswanath
Andy Cohen Apologized To Larsa Pippen After A 'RHOM' Season 5 Reunion Dust-Up
By Brad Witter
Get Even More From Bustle — Sign Up For The Newsletter
From hair trends to relationship advice, our daily newsletter has everything you need to sound like a person who’s on TikTok, even if you aren’t.