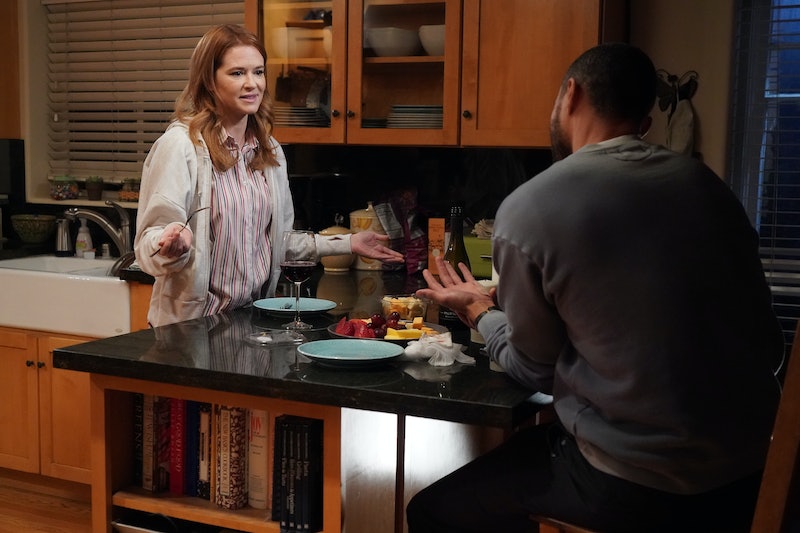 ABC/RICHARD CARTWRIGHT
By Grace Wehniainen
May 6, 2021

Spoilers ahead for Grey’s Anatomy Season 17. Now that Meredith seems to be OK and on the way to recovery from COVID, Grey’s Anatomy viewers are hopping to the next pressing order of business: Jackson and April’s on-screen reunion. The prospect of a rekindled romance for the volatile (but loveable) couple has tantalized fans in the weeks leading up to the May 6 episode. Many took to TikTok to offer up their theories on what a Japril reunion might look like, with ideas ranging from romantic kisses in the rain to Jesse Williams’ Jackson potentially leaving the show altogether. Nothing is certain until the Thursday night event commences, but a recent interview with Sarah Drew and clues from this week’s promo reveal some of the more likely outcomes for the co-parents.

Many prevailing theories point to April appearing not to wear her wedding ring and being single, making way for a possible romantic reconciliation with Jackson. Sadly, Drew herself seems to have shut down questions about this rumor. In a recent interview with Entertainment Tonight, the Cruel Summer actor said her character has “still been living in Seattle with Matthew, and co-parenting Harriet, and that’s where we pick her up. Everything that you’ve all assumed of where she’s been, that’s where she’s been.”

Regardless of April’s romantic life, she is apparently in a good place with Jackson, as evidenced by the promo pics and Drew’s own assessment: “They’ve always been a healthy, working, co-parenting team,” she told ET. However, she couldn’t confirm whether there were still feelings to work out on either side.

Other theories point to an angsty confession of love from Jackson, due to his standing outside April’s door and psyching himself up before seeing her: “Alright, I know this seems like, impulsive and out of nowhere, but it’s not,” he says in the promo. But if April truly isn’t single, it would be weird (but hilarious) for Jackson to throw a wrench in her relationship with Matthew. He’s done it before with that Graduate-style wedding disaster, so it’s not entirely out of the question. But on the flip side, he’s ostensibly grown since then.

So what could that “impulsive” decision mean? It likely has something to do with Jackson’s dad, and a personal disillusionment with the Catherine Fox Foundation. Additional promo photos for the May 6 episode show Catherine on the phone with someone and sharing an embrace with Richard, which could hint at Jackson calling his mom to let her know he’s done with the foundation. ABC’s episode synopsis confirms the theory that Jackson “pays a visit to his father that helps set him on the right path.” If that visit inspires Jackson to, say, start a new organization or give up surgery for more hands-on activism à la April, then it would make sense that she’s the one he turns to for guidance — or maybe even as a partner.

Regardless of Japril’s outcome, Drew’s upcoming appearance has left a lasting mark on the Grey’s fandom. Not only has Williams posted playful memes about the episode on Instagram, but Drew has unabashedly embraced her status as Japril Shipper No. 1 on Twitter.

Teasing this big episode, Drew tweeted that she would go live on Friday, May 7, “so we can talk freely about everything.” Perhaps the announcement is confirmation that some serious stuff will go down on tonight’s episode... or maybe it’s just a way for Drew to commiserate with her fellow shippers’ inevitable disappointment. Either way, this episode and the social flurry that follows will be worth the watch.