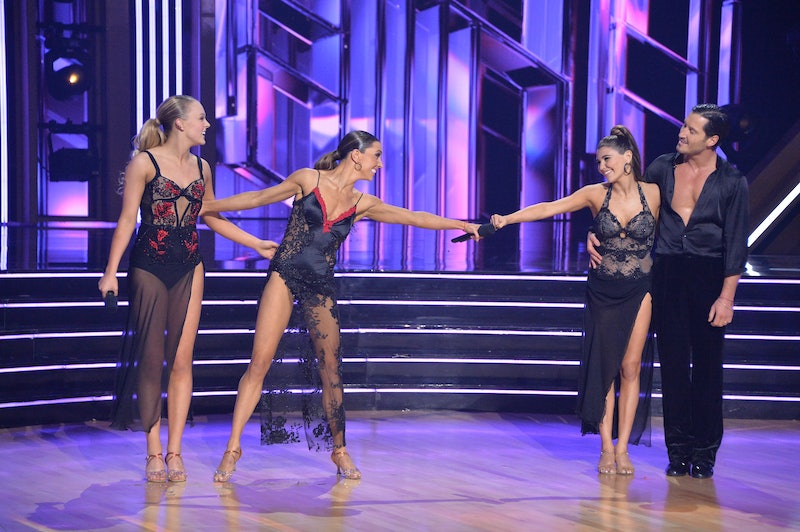 Dancing With the Stars just took viewers on an escapade. It was Janet Jackson Night on the Nov. 8 episode of DWTS — or Ms. Jackson if you’re nasty. Before the stars took the stage, Jackson blessed viewers with a rare surprise appearance live from her London home, sharing how “honored” she was for the show to celebrate her music. “I think it’s great,” she said. “I love all types of dance. It’s another way to express yourself. If you don’t do it through words, another way you can express yourself is through dance.”

Given that it was the final episode before the semi-finals, the contestants had to bring it all in order to make it through. Each celebrity had two chances to make their mark on the judges and viewers, with their typical solo routine and a special dance-off that gave them the opportunity to earn bonus points. Stars like Amanda Kloots, Suni Lee, and JoJo Siwa soared, while others, like Olivia Jade and Melora Hardin, faced danger despite getting some of the highest scores of the night.

But it was the double elimination that sent Twitter into overdrive, with viewers celebrating one contestant’s loss and mourning the other.

Every star had the chance to earn two bonus points from the judges by competing against each other in a dance-off. Each pairing would take on the same genre, and the judges would give points to the duo who crafted the better routine. In the ultimate Gen Z showdown, JoJo Siwa and Olivia Jade faced off, meaning their partners, married couple Val Chmerkovskiy and Jenna Johnson, also competed against each other. The couples performed a sensual rumba to Jackson’s smoldering hit “That’s the Way Love Goes,” and even though they both brought the heat, it was Siwa who won out, and Twitter seemed to agree with the results.

In previous weeks, Lee has received criticism from the judges for not being “confident” enough during her otherwise impressive routines. That wasn’t the case on Janet night. The Olympian and partner Sasha Farber performed a samba set to Jackson’s 2001 smash “All For You,” and she truly let her personality take center stage, with their routine coming straight out of a Miami beach resort. The judges loved how much fun Lee was having on stage, and awarded her one of the night’s few perfect scores. After suffering from illness last week, it was quite the comeback.

Before the semi-finals, two more contestants had to leave the competition, and for some fans, one elimination was long overdue. The bottom three pairings were Olivia Jade and Val Chmerkovskiy, Jimmie Allen and Emma Slater, and Melora Hardin and Artem Chigvintsev. The contestant with the lowest combined scores and votes was automatically eliminated, meaning that Jade was sent home without getting the chance for the judges to save her. But instead of mourning the loss, many fans on Twitter shared their excitement through memes.

Jade’s automatic removal meant that the judges had to save either Allen or Hardin from elimination. All of the judges told Allen how much he had improved on the show, but they ultimately voted the country singer off, citing The Office star’s high scores for the night and consistently impressive routines throughout the show. However, viewers still thought Allen deserved a spot in the semi-finals — and got mad at host Tyra Banks when she apparently cut him off before the end of the show.