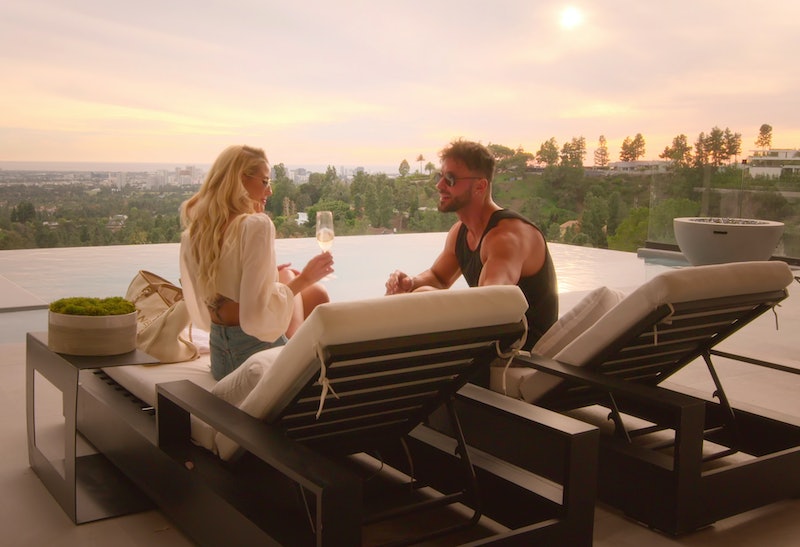 Selling Sunset is technically about high-end real estate in Los Angeles, but fans are really watching it for the budding relationships of the Netflix reality stars in Season 5. The relationship between Chrishell Stause and Jason Oppenheim has been the talk of the latest season, but audiences have also latched onto the flirtation between Emma Hernan and newcomer Micah McDonald.

Texas native Micah first appears in the Netflix show’s fifth season as one of Emma’s clients working on an eight-figure deal. Sparks fly between her and the property manager pretty quickly, even though Emma had a rule about not dating clients. In a confessional in the third episode of the newest season, Emma admitted to having a crush on Micah. “I usually don’t mix business with pleasure, but Micah’s a little bit different,” she said. “We had like one or two meetings, and I was like, ‘Oh, my god.’ Not only is he attractive and successful and confident, but we actually have a lot in common. I mean, basically he’s just, like, check, check, checking every damn box.”

After meeting on a tour of his in-progress Beverly Hills property, Emma gave in and went on a date at his LA restaurant Sagrado, where they did a private mezcal tasting on camera. A hot tub date in the season finale followed that, signaling that they could be headed toward a relationship.

But what do we really know about Micah? Here’s a rundown of his Instagram, job, restaurant, and current relationship status.

Micah is a man of few posts. The Houston native only has 30 in-feed posts on his Instagram page, with the earliest one dating back to October 2020. A self-described “Entrepreneur, President & CEO, and Hybrid Athlete,” his posts are a mix of fitness and fashion inspiration, glamour shots of his extravagant properties, images of him courtside at Houston Rockets games, and his first NFT.

Micah is not only a fan of his hometown NBA team, but of the sport in general. He once posted a tribute to Kobe Bryant and his daughter Gianna for the anniversary of their death.

As for the captions of his Instagram posts, Micah’s all about spreading positivity: Most of his posts exude messages of motivation and hard work.

Both Emma and his stint on the Netflix reality show have not appeared on his grid as of April 27.

As a real estate entrepreneur and property manager, Micah develops commercial and private properties. The Beverly Hills home that brought him and Emma together has been in progress since he bought it in 2016. Micah posted an update of the mansion after Season 5 dropped.

Sagrado Mezcaleria, the restaurant where he and Emma went on their first date, is also owned by Micah. Located in Atwater Village in Los Angeles, the restaurant is dedicated to “introducing customers to the sacred techniques of Mezcal making.”

On their date, the couple not only sampled his mezcal but also dined on Emma’s vegan empanadas — a dish made with “beyond meat” that is on the restaurant’s menu. Visitors and locals can plan their own version of Micah and Emma’s date, dining inside, on the sidewalk, or on the patio.

Is Micah Dating Anyone Right Now?

While Micah has not made any public statements, Emma recently confirmed that she and Micah are still seeing each other.“Me and Micah definitely have something special,” she told Entertainment Tonight in April. “We’re definitely still enjoying each other’s company.” The duo have not yet defined their relationship, owing the slow burn to the fact that neither of them live in Los Angeles full time. Micah splits time with Houston, and Emma spends some of the year in Boston, where she runs a frozen food business Emma Leigh & Co.

Emma expressed concerns about a long-distance relationship, though she concedes that she and Micah have “become closer” since filming ended and she hasn’t taken a relationship off of the table completely: “We’ll see. Maybe Season 6, there will be a label, a ring. Who knows?”