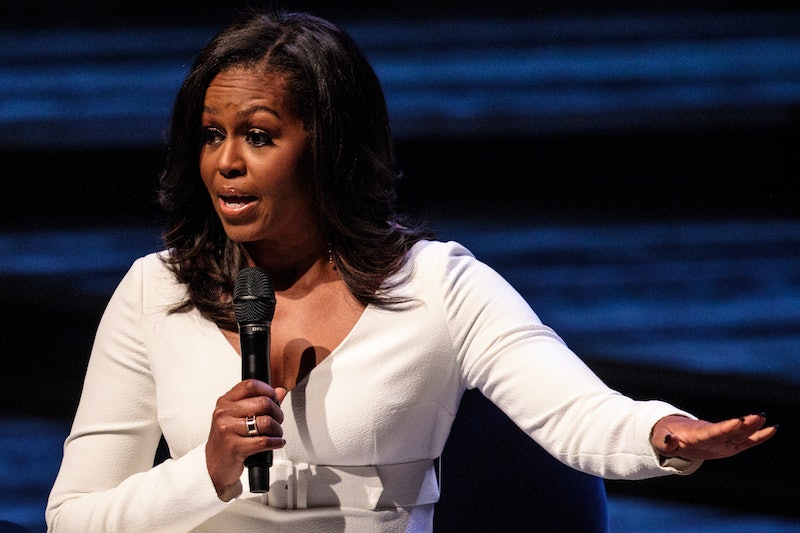 She wasn't announced as a presenter in advanced, but former First Lady Michelle Obama was at the 2019 Grammys, sharing the stage with some of music's biggest superstars. At the top of the show, she joined host Alicia Keys and presenters Lady Gaga, Jennifer Lopez, and Jada Pinkett Smith to deliver a message about perseverance, strength and the power of music to lift everyone up.

After the four women on stage with her delivered their own personal love letters to the art of music, Michelle Obama shared her own experience, only to be drowned out by a deafening round of applause that filled the Staples Center. Following the applause and the accompanying standing ovation, Michelle Obama spoke of the Motown Records vinyls that she used to play until they were worn out to the “Who run the world?” songs that “fueled her through this last decade.” Obama continued, "Music has always helped me tell my story. And I know that’s true for everybody here. Whether we like country or rap or rock, music helps us share ourselves, our dignity and sorrows, our hopes and joys. It allows us to hear one another, to invite each other in. Music shows us that all of it matters. Every story within every voice, every note within every song."

While everyone onstage shared personal tributes to their relationships with music, there's no denying that Michelle Obama's words, in addition to her presence, had a profound effect on the audience both in the Staples Center and those watching at home.

After her appearance, Michelle Obama took to Twitter to explain that "A big part of friendship is showing up for your girls — that’s why I was thrilled to be there for the one and only Alicia Keys at the Grammys. She is one of the most genuine and thoughtful people I know — there’s no one better to help us all celebrate the unifying power of music!"

Michelle Obama's presence was a surprise to almost everyone in the room, but it shouldn't be shocking that she cares so deeply about music. In addition to being famous for having been the President and First Lady of the United States of America for two terms, Barack and Michelle Obama are known for their impeccable music taste. They're been known to share their playlists with the listening public and have the good fortune to count Beyoncé and Jay-Z as their friends and contemporaries, showing that when it comes to a passion for music, they're walking the walk in addition to talking the talk.

Her appearance also served as a reminder of just how effective Obama is at communicating with an audience, a skill that was on full display during her eight-year tenure as First Lady. For an all-too-brief moment of the Grammy ceremony, it truly felt as though Michelle Obama was the First Lady once again.