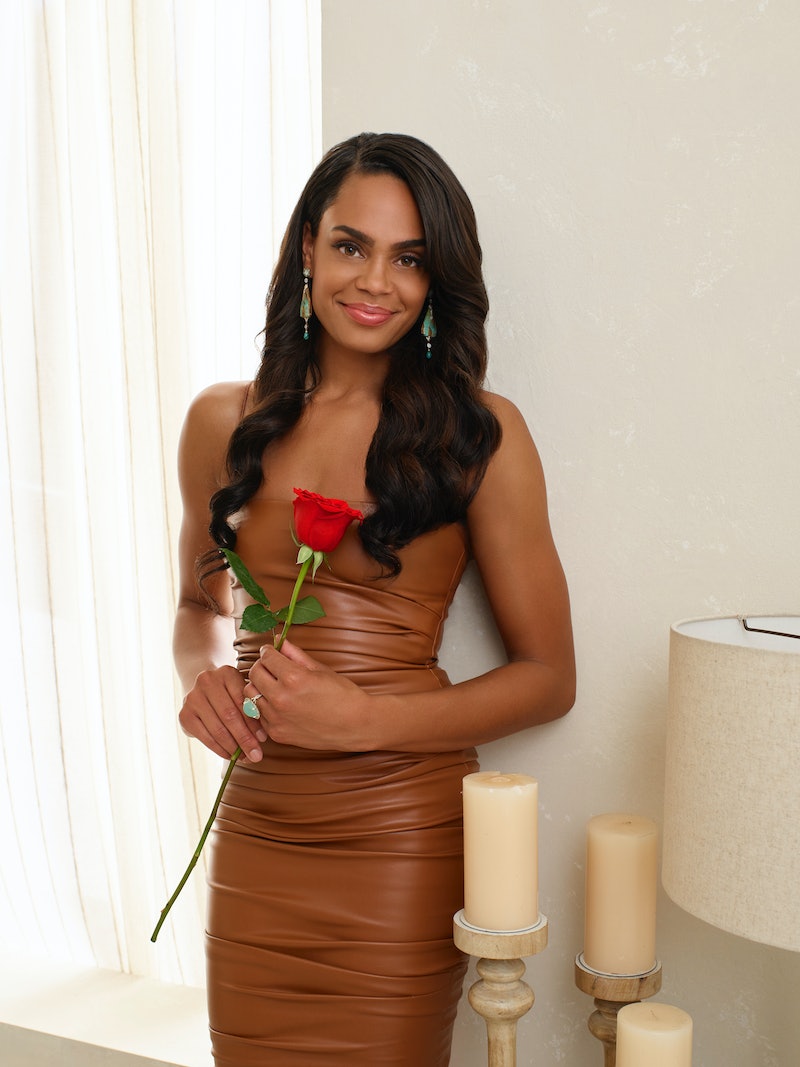 In the final moments of the Season 7 finale of Bachelor in Paradise, fans got a sneak peek at Michelle Young’s upcoming season of The Bachelorette. The nearly four-minute video gives Bachelor Nation a glimpse at what they can expect when the 28-year-old teacher embarks on her journey to find love on Oct. 19. And while handsome men, extravagant dates, and roses are always to be expected, the Season 18 trailer features one very creepy contestant.

“We found something that was actually really alarming,” co-host Tayshia Adams says halfway through the teaser. Tayshia and Kaitlyn Bristowe then present Michelle with folders of evidence proving that one of her contestants is “planning out their every move.” Michelle appears stunned, and looks like it’s just one of many issues the new lead will have to deal with on her season.

“A lot of guys are questioning that you might have known him before here,” one contestant tells Michelle without revealing which guy he thinks she knew beforehand. Some other contestants seem to have gotten the same impression, including future Bachelor Clayton Echard. “He said he doesn’t know her, but there’s something he’s not telling all of us,” Clayton says of the mystery contestant, who might actually be 27-year-old account executive Nayte Olukoya.

“Nayte is a player,” one contestant says before Clayton tells Nayte how he feels to his face. “You’re an actor and you’ve come on a reality TV show,” the 28-year-old sales rep says. Nayte seems shocked to be confronted at all. “What are you talking about,” he seemingly responds. The drama only gets more intense from there, with some of the guys calling each other “rats” and “clowns” and others threatening to “expose” those who are there for the wrong reasons. At one point, someone even throws one of the guy’s jackets into the pool.

“I just feel unseen,” Michelle says toward the end of the trailer. “I can’t keep giving and giving and not getting it back.” Even with all of the drama, it seems like our next Bachelorette is excited for the adventure. “I’m ready to fall in love,” she shouts at the beginning of the teaser. “I feel super special,” she says over footage from one of her group dates. “How would a girl not feel special?”

Elsewhere in the clip, Michelle makes it clear what she’s searching for. “I’m looking for my soulmate, my best friend, somebody who’s going to change the world with me,” she says before confessing she had “the hottest kiss” in her life. And even though things do not work out between her and Clayton in the end since as he’s already been cast as the next lead, he does admit to falling hard. “The more time I spend with her, the more I realize she can be the one,” he says.

The teaser ended with a letter to Michelle’s soulmate. “Love hasn’t really been easy for me,” she says, revealing that she’s always been the girl “picked last for prom but first for basketball.” “It was like there was nobody like me, therefore there was nobody to see me,” she adds. Luckily, it seems like she may finally find someone who understands her. “I’m in love with this man,” she says, adding that the contestants on her season are “the best guys I’ve met in my entire life.”