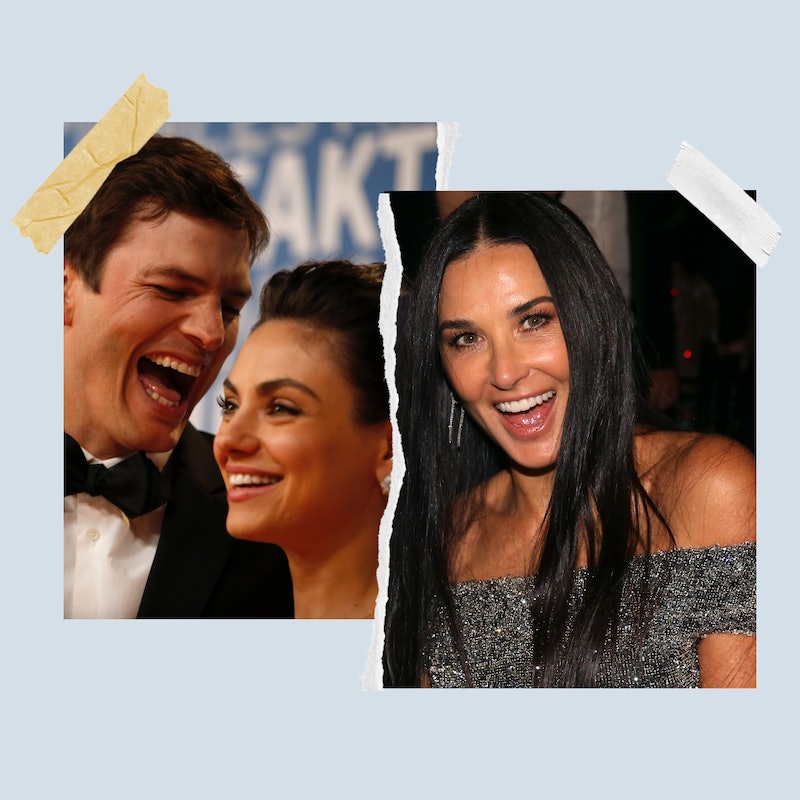 Mila Kunis is married to Demi Moore’s ex-husband Ashton Kutcher, but instead of keeping their distance, they’re laughing to the bank together. Kunis and Moore nod to Kutcher in AT&T’s new Super Bowl commercial, which reveals that a husband is not the only thing they have had in common in their lifetimes. The ad shows them both at a high school reunion, where their respective friend groups encourage each of them to walk to the stage, expecting them to win the Most Admired Alum Award for their achievements in acting.

Neither woman realizes that the other was in attendance. Instead, a random classmate wins the award after earning the title of “AT&T’s First Gigillionaire,” causing the two to have an awkward onstage interaction. “I had no idea that we went to the same high school,” Moore tells Kunis, who replies, “We have a lot in common.” And that’s the sly nod to Kutcher. Adding salt to their wounds, the actual winner asks, “Who were those women?”

It turns out that Kunis and Moore both attended Fairfax High School in West Hollywood, albeit 23 years apart. Moore left during her junior year to pursue her career, while Kunis graduated in 2001 as she was starring on That ’70s Show alongside Kutcher.

Kunis reached out to Moore to star in the ad once she found out they were both alumni. “It was during my first collaboration meeting with AT&T that we discovered Demi was also a Fairfax High alum,” Kunis told Entertainment Tonight. “I thought it would bring humor and laughs to what was already a great ad. I reached out to her and was so delighted she jumped on board.” Moore was equally thrilled by the clever concept, adding, “Who knew being a Fairfax alum would have brought this unexpected opportunity, to come together with Mila in such a fun and playful way?”

Moore tied the knot to Kutcher in 2005 and divorced in 2013 after eight years of marriage. Kunis and Kutcher were love interests on That ’70s Show (he was even her very first kiss), but the two never dated offscreen until after he separated from Moore. They eventually got married in July 2015 and welcomed two children together, 7-year-old daughter, Wyatt, and 5-year-old son, Dimitri. Despite a brief mishap when Moore opened up about her marriage to Kutcher in her 2019 memoir and he didn’t have the greatest response, they split on relatively good terms.

The former spouses still work together on their anti-human trafficking foundation, Thorn: Digital Defenders of Children, and Kunis has even defended their marriage in the past. Speaking on the WTF With Mark Maron podcast in July 2018, the Bad Moms star said her husband had a “normal, real relationship” with Moore. “It was a normal life … he was younger, but he loved those kids,” she said, referring to Moore's daughters Rumer, Scout, and Tallulah Willis, who Kutcher said he still keeps in touch with. “I love them and I’m never going to stop loving them and respecting them and honoring them and rooting for them to be successful in whatever they are pursuing,” he said.