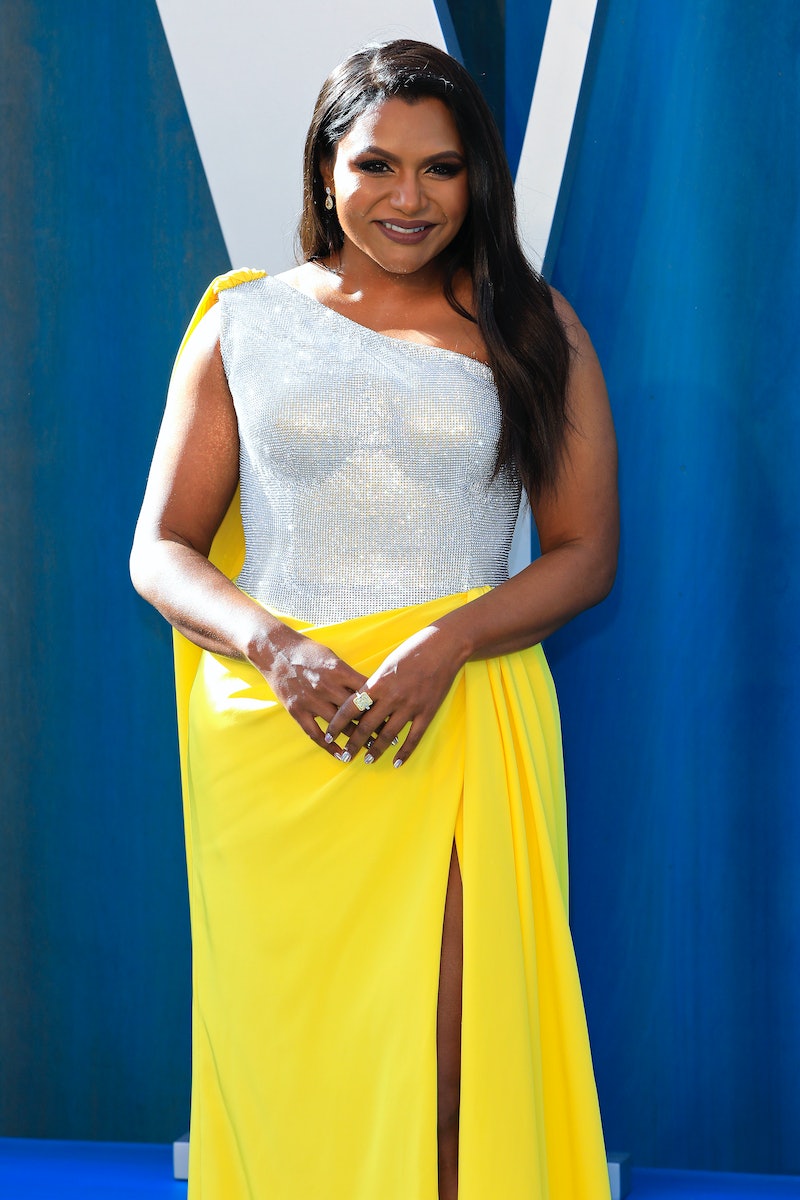 It’s that time again: People magazine has unveiled its annual Beautiful Issue. This year, Mindy Kaling is among the honorees — and she has complicated emotions about the whole thing. In an April 29 Instagram post featuring an image from her photo shoot with the magazine, the comedian and actor admitted she feels “a little self-conscious” about being included.

“THANK YOU @people for including me in the most beautiful issue!” Kaling wrote in her caption. “I’m a little self-conscious about it, but as you can see, not nearly enough to not post about it! So much fun.”

The Locked Down star’s Beautiful Issue section shows her in a gorgeous purple gown, sitting on the floor next to an mostly-finished pyramid built from playing cards. Her look features the work of stylist Hayley Atkin, manicurist Thuy Nguyen, makeup artist Janice Kinjo, and hairstylist Marc Mena. (Unfortunately, it’s a mystery who should get credit for building the impressive pyramid.) Text alongside the photo highlights that Kaling is “not just a pretty face.”

The finished product was lauded in Kaling’s comments section. Her Never Have I Ever colleague Poorna Jagannathan showed that she loved every bit of her boss’ section, writing, “And you’re just casually building a house of cards while looking fabulous?!!”

Meanwhile, another Never Have I Ever star, Maitreyi Ramakrishnan, commented that Kaling is “crushing it,” and fellow actor Lena Waithe summed up her feelings with three heart-eyes emojis. Kaling got still more emoji praise from her Office co-star Angela Kinsey, who reacted with a red heart, fire, and applause emojis. And yes, many people let the Mindy Project vet know that they feel the “beautiful” label suits her perfectly. “Beautiful and well deserved,” one follower wrote.

Kaling’s inclusion in the Beautiful Issue put her in wonderful company. Stars featured in People’s 2022 edition include Selena Gomez, Adele, Squid Game’s Hoyeon, and Zendaya, among others. Acting legend Helen Mirren was honored with the cover this year, and she was “gobstruck” when she found out. She told the magazine that she never considered herself “beautiful” and was “amazed” to make the issue at the age of 76.

“Most of us are not beautiful. We have other stuff, which is just as powerful as beauty,” Mirren said. “And I would like to see us celebrate those things … I love the word swagger because I think swagger means I’m confident in myself, I’m presenting myself to the world, I’m enjoying the world around me. I think what is called the beauty industry should be called the swagger industry. We’re giving people swagger.”

Beauty, swagger, or whatever else you want to call it, Kaling can rest assured that she has it in spades. And if she’s actually the one who managed to build that card pyramid, then she should be extra proud.