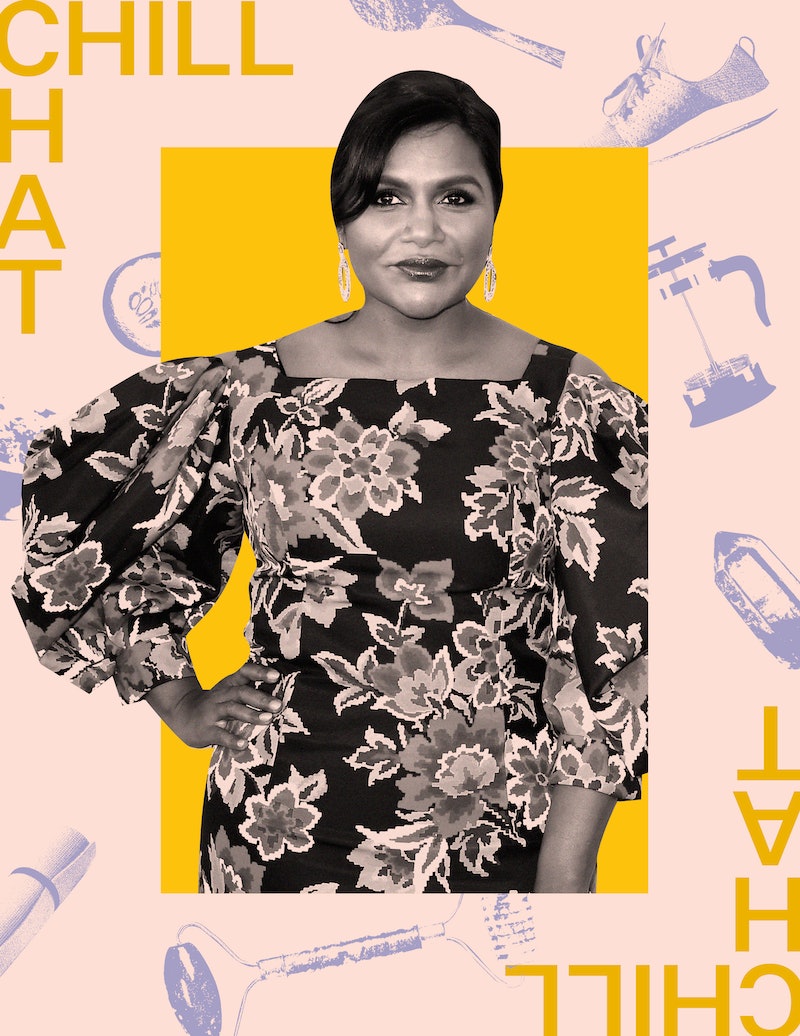 In Chill Chat, Bustle sits down with stars to chat about all things wellness, from their favorite workout to their hacks for getting a good night’s sleep. Here, Mindy Kaling reveals her impressive morning routine, her go-to running song, and her recipe for a “medicinal” bath.

It’s not that Mindy Kaling’s wellness game isn’t strong. But, when asked about it, the actor and writer tells me how some people are emerging from the pandemic with “the best bodies of their lives,” she says over Zoom. “That is my latest pet peeve: being happy for friends I haven’t seen in forever, and they’re like, ‘I’m a hard body now!’”

Kaling, who was pregnant throughout the quarantine, credits running for being her go-to fitness habit and an overall lifesaver for the past year. “I’m a runner... a slow runner,” she tells me. “I run a 10 to 11-minute mile, but I do it five to six days a week. It was the only way I could leave my home.” Basically, those miles functioned as one of her sole sources of me-time: “I was caring for my children and doing all my writing work from home, so it felt like [running] was just for me — that and showering were my only escapes from everything.”

The majority of Kaling’s healthy rituals take place in the a.m., as she’s admittedly not a night owl. “I’m such a morning workout person that if I can’t fit it in in the morning, I just won’t do it,” she says. But that’s not something that happens too often — Kaling, who’s the new face of Propel Immune Support water, notes she’s been diligent with fitness. “I was pretty psyched with my wellness and exercise routine throughout the pandemic, and through the end of my pregnancy,” she admits.

Below, Kaling shares her hack for pushing through runs, the celebrity whose smoothie recipe she copies, and how she sets up the perfect self-care bath sesh.

I don’t drink either. I don’t drink caffeinated beverages. It’s not that I don’t want to have them — I’ve just culturally missed the coffee thing. I literally just drink water.

I once read that water with lemon in it, when heated up, if you can drink a glass of that every morning it’s the key to health — but I’m just too lazy.

Wow, no caffeine in the morning — that’s respectable. What’s your morning routine like?

That’s really impressive — what’s the best fitness advice you’ve ever received that keeps you on your morning workout schedule?

A good third of the time when I go running, I’m like, ‘What am I doing? I don’t want to do this.’ I do a trick that works with me, which is I tell myself to run a mile. And, almost always, I exceed that because it’s the first eight to 10 minutes that are the hardest of my workouts. So my biggest tip is to keep the bar really low for how much I’m going to do, and I always exceed it.

What’s on your running playlist?

Right now, I’ve been in a Kanye and Jay-Z phase. And, as someone who’s a huge Beyoncé fan, I hadn’t listened to the Carters’ album Everything Is Love that much. So, I don’t know if I can say this on Zoom, but “Apesh*t” is the first song I play when I workout — it’s such a good one.

Do you prefer baths or saunas?

What do you add to yours?

I like a fizzy bath salt. There’s this one that I got recently [from Pursoma] that you’re supposed to use when you’re sick, and it’s the most intense — you put it in burning hot water, and if you’re feeling sick or have the flu or anything you go in and it just completely clears your sinuses. It’s like eating wasabi, this bath. I don’t even know the science behind it, but I remember the next day thinking, this was not a ‘luxuriating in the bath’ situation — it was like a medical experience [laughs].

What’s something you’ll always put in a smoothie?

I make the Gwyneth Paltrow, Reese Witherspoon green smoothie. It’s a Kimberly Snyder recipe that’s just a bunch of vegetables — I’ll do that because it’s a really easy way for me to get fruits and vegetables.

I really try to drink about 100 ounces of water a day, which has been so much easier now that I’m drinking Propel because it actually tastes good.

What do you need to have a good night’s sleep?

Something I’ve been doing recently, as it was becoming maddening how much I was checking my phone, is leave my phone in another room. When I do that and I’m lying in bed, it feels like I’ve been transported back into like, Louisa May Alcott days. I just read a book, and I find nothing more anesthetizing than that. I don’t know what it says about me, but about 10 pages of any kind of non-fiction book and I’m asleep.