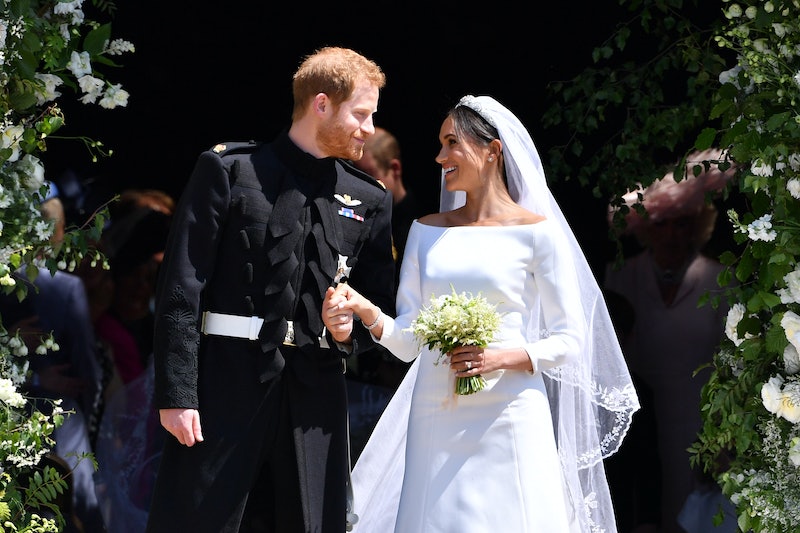 Royal watchers around the world marveled at Meghan Markle’s wedding dress when she married Prince Harry in May 2018 — so much so, in fact, that the Givenchy haute couture gown just earned a major distinction. The Duchess of Sussex’s dress topped a list of the past decade’s most popular wedding gowns, followed closely by sister-in-law and Duchess of Cambridge Kate Middleton’s 2011 lace Alexander McQueen creation, which landed in the No. 2 spot, according to the British fashion and lifestyle magazine Tatler.

The outlet’s source is the United Kingdom’s Find Me a Gift website, which conducted the analysis of celebrity bridal gown internet search volume and concluded that Meghan has racked up 21,900 average monthly U.K. searches, edging out Kate’s 21,500 hits per month. The two were ahead of the pack by far, but joining the royals on the list were Hailey Bieber (née Baldwin), who wed Justin Bieber in a Virgil Abloh for Off-White off-the-shoulder gown in 2018, with 5,800 monthly searches, and Ariana Grande, who donned multiple looks, including a ’90s-inspired Vera Wang, for her surprise May nuptials to real estate agent Dalton Gomez and has produced 2,400 average clicks per month across the pond.

Givenchy designer Clare Waight Keller, the first female artistic director of the French fashion house, was reportedly shocked by the level of worldwide attention Meghan’s gown received during the 2018 royal wedding. “I had no idea how momentous it was going [to] be,” Keller told Time in April 2019 of the silk gown, which featured an open bateau neckline. “The last time there was a royal wedding there was no Instagram, really, or any of those huge social networks. So it really took me aback, actually.”

Similarly, Alexander McQueen Creative Director Sarah Burton was taken aback by the widespread interest in Kate’s fitted V-neck gown, which included a flowing, nearly 9-foot-long train. “I had no idea it would be as big as it was. Only the night before, seeing all the photographers outside the abbey, did I think, ‘Oh, my God. This is massive,’” she told T: The New York Times Style Magazine, though she cited the “virtue” of privacy as her reason for not discussing the sartorial collaboration any further.

Even those not lucky enough to snag an invite to either wedding have had a chance to see both dresses with their own eyes. The Duchess of Cambridge’s wedding dress temporarily went on display at Buckingham Palace in 2011, followed by a public viewing of Meghan’s gown in the castle’s Grand Reception Room — where the queen had hosted an afternoon wedding reception following the St George’s Chapel wedding ceremony. According to the Royal Collection Trust’s senior curator, Caroline de Guitaut, both gowns are now “the property of their owners” and have been “rolled with specialist materials” to preserve them for years to come.

Despite being out of sight for years, however, both Meghan and Kate’s dresses are clearly not out of mind.