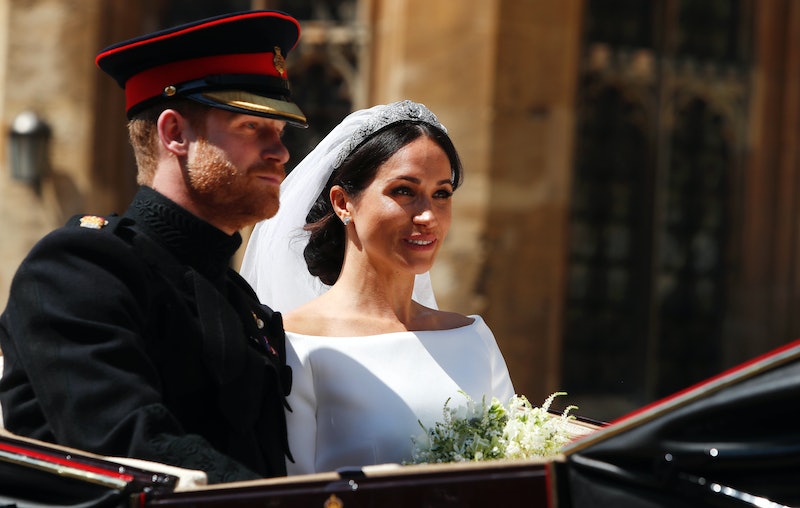 When Meghan Markle and Prince Harry got married on May 19, 2018, millions of people across the world tuned in to watch. The couple had gone through a whirlwind courtship during the two years they dated, and as while royal watchers wondered whether Meghan would be The One, fashionistas elsewhere began turning to the would-be duchess for style inspiration.

Known as the “Markle Sparkle,” anything Megs wore became instant fodder for the fashion blogs. So it should come as no surprise that Meghan’s wedding dress marked a major moment in style history. Here’s everything you need to know about what the Duchess of Sussex chose to wear on her big day.

For the wedding ceremony at St. George’s Chapel in Windsor, Meghan wore an elegant and understated Givenchy gown designed by Clare Waight Keller, the first female artistic director at the French fashion house (Keller later stepped down from that role in April 2020). It featured a timeless boat neck neckline, three-quarter length sleeves, and a sculpted waistline that draped into a train made from triple silk organza.

Many thought Meghan would choose a British label for her wedding dress, so going with Givenchy was surprising to some royal observers. Because Keller is a Brit herself, however, the move wasn’t considered a total snub to British fashion.

“After meeting Ms. Waight Keller in early 2018, Ms. Markle chose to work with her for her timeless and elegant aesthetic, impeccable tailoring, and relaxed demeanor,” Kensington Palace said at the time.

How much did Meghan Markle’s wedding dress cost?

Although the Royal Family never released official figures on the price tag of Meghan’s wedding dress, educated guesses range from $200,000 to $450,000. (Bridal haute couture doesn’t come cheap.) But if that figure seems exorbitant, it’s actually not the most expensive wedding dress to make headlines in recent years.

Take, for instance, former Hollywood royal couple Kim Kardashian and Kanye West. Although they’re no longer together, their extravagant 2014 wedding in Florence, Italy was one for the books. And Kardashian’s dress — which, coincidentally, also was designed by Givenchy — cost a cool $500,000, according to Brides.

How many wedding dresses did Meghan Markle have?

No duchess is going to wear just one outfit on her wedding day. After the ceremony, Meghan changed into a second dress for the reception — this one, a stunning silk crepe gown by Stella McCartney featuring a high neck, an open back, and a floor-grazing skirt.

The ultra modern bridal ensemble, which struck the perfect balance between ease and elegance, spawned numerous copycat versions. She kept accessories to a minimum, opting for white satin heels by Aquazzura with nude mesh and soles painted in baby blue. And Meghan wore another something blue with this ensemble: Princess Diana’s aquamarine ring, which is thought to be a gift from Harry.

What was special about Meghan Markle’s wedding veil?

Considering Meghan’s attention to detail, it’s no wonder her wedding veil included a hidden meaning. Carefully embroidered on the 16-foot creation were the flowers representing all 53 nations around the world that are part of the British Commonwealth, and it was held in place by a tiara originally belonging to Queen Mary. Queen Elizabeth loaned the piece to Meghan for the big day.

“With Harry’s role as youth ambassador for the Commonwealth, it was so important to us to have the spirit of inclusivity at our wedding,” Markle said about the choice to include the floral details on her veil in the HBO documentary Queen of the World.

Each flower was unique and specific to each country, hand embroidered in silk threads and organza, and took hundreds of hours to create. Markle also chose two flowers in addition to the bouquet inspired by the Commonwealth countries: Wintersweet, which grows in the gardens of Kensington Palace in front of Nottingham Cottage, the couple’s former home; and the California Poppy, the official flower of the state where Meghan was born.

The wedding day may be all about the dress, but no gown is complete without a little sparkle. Or, in Meghan’s case, quite a bit of sparkle: Harry designed Meghan’s engagement ring with the jeweler Cleave and Company using three diamonds, each with its own distinct meaning and significance.

The center stone is from Botswana, a place that holds sentimental value for the couple, who traveled there when they first began dating. The outside stones are from Princess Diana’s personal collection — “to make sure that she’s with us on this crazy journey together,” Harry said during the couple’s first post-engagement interview with the BBC. The diamonds were originally set on a gold band, although Meghan has since swapped it out for a pavé diamond one.