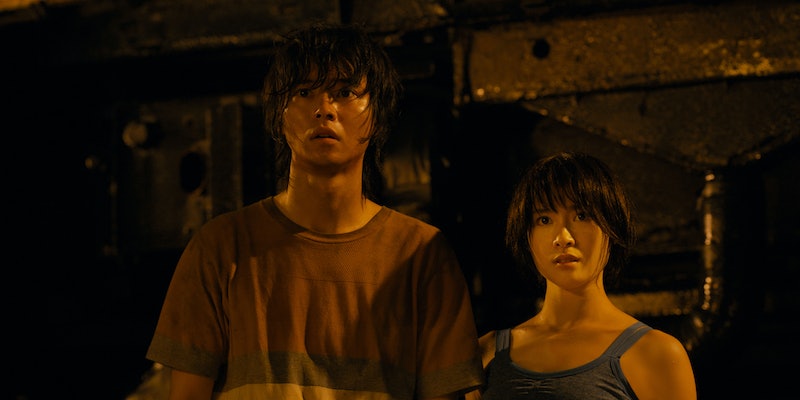 Gruesome survival game thrillers are proving to be quite the hit these days. Following the massive success of Netflix’s Korean series Squid Game, fans are hungry for more extremely violent and twisty options from the genre. While the 2020 Japanese drama Alice in Borderland was well-received when it first premiered on the streaming platform, it recently gained a second life, with many just now discovering it and the stellar actors who make up the cast.

In it, Arisu (Kento Yamazaki) spends a lot of time playing games in his choice of virtual realms — until he suddenly finds himself in Borderland, a gaming arena where he has to compete for survival IRL. He later finds that the only people there are fellow contestants and all of them must keep playing — and sometimes killing — to stay alive. Like in Squid Game, some activities are familiar, but the rules in Borderland are way more complicated with extra challenges, mind games, and deception.

Directed by Shinsuke Sato, the eight-episode series based on the manga Imawa no Kuni no Alice by Haro Aso is already set for a second season, and it’s only a matter of time before more onscreen violence occurs. Of course, some of the characters have already died, but who really knows? They may just stage a resurrection. Here’s everything to know about the Alice In Borderland cast, including where its leads have co-starred before.

Yamazaki plays the video game-obsessed Ryōhei Arisu, who finds himself having to play for dear life in an empty Tokyo. The actor had already done the rounds in Japanese film and TV series and had a working relationship with the director after starring as the lead in Sato’s period drama Kingdom. Prior to Borderland, Yamazaki had been the leading man in romantic comedy shows, including A Girl and Three Sweethearts and Heroine Disqualified, but he’s most known for his role in the 2015 teen fantasy film Orange, where he plays a troubled transfer student. For Good Doctor fans, you should know that Yamazaki played the brilliant autistic surgeon in the Japanese version of the Korean series.

As Yuzuha Usagi, the former mountain climber who also gets stuck within the confines of Borderland, Tao Tsuchiya eventually befriends and teams up with Arisu. If fans picked up any chemistry between the two actors, that’s because this isn’t the first time Tsuchiya and Yamazaki acted together. The two previously starred as the leads in Orange and as husband and wife in the J-drama Mare, Tsuchiya’s most notable project throughout her impressive career. In it, Tsuchiya plays the titular aspiring pastry chef who sets out to find — and replicate — the cake she loved most as a child.

One character that leaves the series early is Yûki Morinaga’s Chōta Segawa, who nurses an injury from the very first episode. Morinaga’s no stranger to projects featuring games, even fatal ones. He starred in all three films of the Chihayafuru trilogy, where the high school student Chihaya attempts to become the greatest Karuta card player in Japanese history. He was also in the horror film Live, where race participants find out their families are held hostage and face brutal, irreversible consequences if they don’t make it to the finish line.

Aya Asahina’s Hikari Kuina is one of the most cunning players in Borderland, so it wouldn’t be a surprise if Asahina reprises her role in Season 2. Asahina may have only started acting five years ago (she worked as a model first), but she’s already amassed impressive credits. She played an aspiring pilot in Runway 24 and the lead in the romantic comedy series Tokyo Alice.

Shuntarō Chishiya is sly — no one knows if he’ll betray Arisu or help him — and Nijirō Murakami is effective in playing the questionable character. The actor’s resume includes a few TV shows to his name, but it’s his roles in films that are most notable, particularly in the 2016 thriller Destruction Babies and the drama Natsumi’s Firefly. He even lent his voice to one of the characters (Hiroshi) in Isle of Dogs, a Wes Anderson film, in 2016.

A character viewers only meet in the latter half of the series, Nobuaki Kaneko seemed to have the most fun in the series as the impulsive Takeru, aka Hatter, who leads a lavish lifestyle as the creator of “The Beach” — all while wearing a robe like a rock star.

Kaneko is a real-life rock star and plays the drums in the rock band Rize. (They even have a song called “Live or Die.” How fitting for Borderland.) Prior to the show, Kaneko was in another Netflix J-drama production, Followers, and more notably, in the thriller Nowhere Girl and comedy films Shinjuku Swan I and II.

If you watched the Tokyo 2020 Olympics, Keita Machida might look familiar: He was one of the torchbearers. In the J-drama, Machida plays Daikichi Karube, one of Arisu’s friends who also gets trapped as a contestant in the deadly games. Though he doesn’t survive the hide-and-seek game, he has a tender moment during that episode.

Prior to Borderland, he had a short stint as a member of the Japanese boy band Generations from Exile Tribe but quit to focus on acting. Since then, he’s been busy taking on heaps of roles. More impressive is the fact that since Borderland, he’s already starred in three more shows, including Super Rich.

Even if she doesn’t make it very far in the Borderland games, Ayame Misaki’s Saori Shibuki makes a lasting impression, especially in the pilot episode where she proves to be a great ally to the confused Arisu. Prior to Borderland, her longest role was as the villain Escape in both the TV series and movie adaptations of Tokumei Sentai Go-Busters, the Korean take on the Power Rangers. (It now sits within the universe of the American original.) After that, Misaki’s acting chops were on full display as the lead in the drama Hikari, which even premiered in Cannes.

Shô Aoyagi’s character Aguni Morizono used to rule the faux paradise the Beach alongside its creator, Hatter, until Hatter’s leadership is proven to be deplorable (read: murderous). In the end, it’s Aguni, a breakaway faction leader, who serves justice to his former BFF. Borderland isn’t Aoyagi’s first romp in action dramas with deadly criminals. He was in Mr. Long in 2017, where the titular hitman’s job goes awry. Aoyagi also starred in the horror-comedy Yakuza Apocalypse, where a vampire bites Yakuza gangsters and spurs an outbreak of fledgling bloodsuckers.