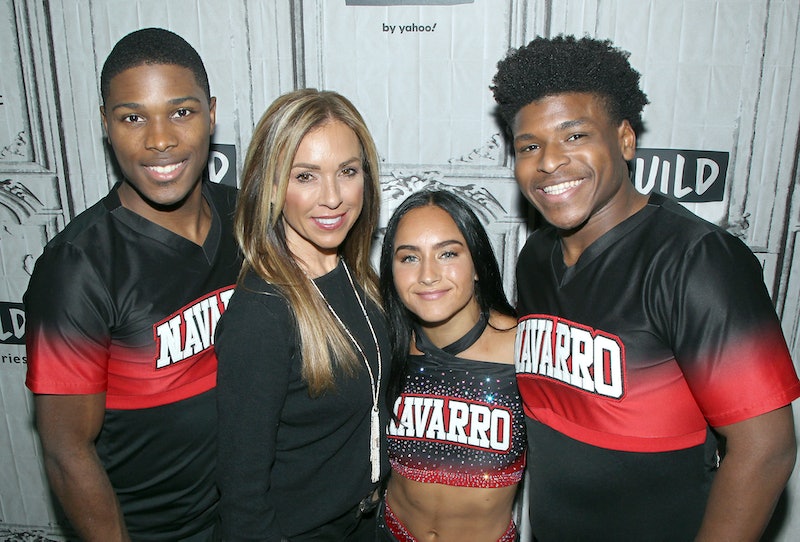 Trigger warning: This piece contains descriptions of sexual assault and misconduct that may be disturbing to some readers.

Cheer Season 2 hit Netflix on Jan. 12, offering an update on everything the Navarro College Bulldogs cheerleading team has been up to since viewers first met its hard-working athletes in Season 1, released in January 2020. But the hit sports docuseries’ focus goes beyond basket tosses, supportive mat talks, and intense Daytona preparation this time around, as rising fame and troubling criminal charges have complicated the team’s family-like dynamic. In September 2020, less than a year after Season 1’s premiere, one-time fan-favorite cast member Jerry Harris was arrested and charged on several counts of producing child pornography and intending to engage in sexual intercourse with a minor. While he reportedly admitted to committing some of the alleged crimes in conversations with authorities, Harris’ lawyers have pleaded not guilty on his behalf, and his spokespeople have denied the accusations.

“We categorically dispute the claims made against Jerry Harris, which are alleged to have occurred when he was a teenager,” stated his representatives, per NBC News. “We are confident that when the investigation is completed the true facts will be revealed.”

After losing sponsorships with Cheerios and Walmart and getting banned from competitive cheerleading by the U.S. All Star Federation, Harris is being held at Metropolitan Correctional Center in Chicago, Illinois, while he awaits trial. If convicted, the former athlete faces a minimum of 15 years in prison. Following the news of his arrest, coach Monica Aldama and Navarro Cheer posted similar brief messages expressing “shock” at the situation and requesting “privacy as our family mourns,” stating: “Our children must be protected from abuse and exploitation.” While some of Harris’ former teammates have spoken publicly about the charges, most of the Cheer cast has remained tight-lipped — until now.

Simply titled “Jerry,” Episode 5 of Season 2 spends nearly an hour unpacking the allegations against Harris through interviews with his ex-teammates, Aldama, and the family whose accusations sparked the FBI’s initial investigation into Harris’ alleged behavior. Here are the biggest takeaways from Cheer’s episode about Jerry Harris’ criminal charges.

At the beginning of Episode 5, Aldama announces she’ll be heading to Los Angeles to film Dancing With the Stars, leaving the team to practice with a substitute coach for most of the fall semester. When the news of Harris’ arrest broke in September 2020, Aldama was in a dress rehearsal preparing for the reality competition’s first live broadcast. “The executive producer came up to me, showed me her phone, and asked me if I had seen the headline in the news that day,” she recalled. “It was like an out-of-body experience at the time. I felt like I couldn’t breathe. I was already terrified.”

Speaking through tears, the coach said she returned to her trailer after performing and “didn’t even want to look” at her phone to read more details, as she felt powerless in the situation. “We had a team meeting that night, and it really felt like a funeral, and I’ve never seen the kids cry so hard. It was just an awful situation,” Aldama explained. “It was a really tough week because I wasn’t here.”

Later in the episode, a producer asks Navarro cheerleader James Thomas how Aldama was affected by the situation. “Honestly, I don’t know. I have no idea,” he said with an air of annoyance toward her absence. “Yes, it probably broke her heart, just like it broke our heart. Yes, she was probably shocked and stunned and didn’t know what to say, just like us. But honestly, I have no idea, because she wasn’t there with us.”

Further detailing her experience receiving the news, Aldama revealed she “cried herself to sleep,” endured a case of COVID-19 shortly afterward, and later received an optimistic letter from Harris. “It was hard to read. I can’t even process it right now because my head’s battling the ‘He did wrong’ versus ‘This person I know,’” she said. “I can’t wrap my head around what I need to even think and how I should feel, which is why I haven’t written him back, ’cause I don’t know what I would say.” She added, “I want to be supportive yet I'm so disappointed.”

In the letter, Aldama said Harris expressed interest in becoming a motivational speaker one day, which confused her. “I just was really caught off guard at the hope he had for the future,” she said, to which a producer replied: “Because from our perspective, it seems hopeless.”

“Yes, and it’s sad, and it makes me tear up every time I think about it,” she continued before explaining how she keeps going. “I keep putting one foot in front of the other. Every single day. Don’t have a choice.”

Harris’ Alleged Victims Faced Backlash For Speaking Out, But They Have No Regrets

The FBI’s initial investigation into Harris’ alleged misconduct was based on accusations from two then-14-year-old teenage twin brothers, Charlie and Sam, stemming from incidents that supposedly began when they were 13, per USA Today. Along with their mother, Kristen, the brothers appear in Episode 5 to detail the allegations and explain their decision to speak up. According to Charlie, Harris first messaged him via a private Instagram account during the alleged victim’s first cheerleading season in December 2018, quickly asked for Charlie’s age, and proceeded to request “butt pics” from the known minor.

Aware of Harris’ star power in the cheerleading world, Charlie said he felt “starstruck” and feared not being liked, so he sent the pornographic image, “blindsided by [Harris’] notoriety at the time.” They messaged back and forth for months, during which Charlie claimed Harris would accuse him of using their connection for popularity if Charlie’s tone “wasn’t flirty” enough.

Charlie then detailed an alleged incident that took place at the American Cheerleaders Association’s 2019 championships, where he first met Harris. After repeatedly dodging messages from Harris suggesting they meet up to “hang out,” Charlie followed him into a bathroom, where Harris asked him to “have sex” or “oral sex” — requests Charlie says he denied. “Then Jerry cornered me into the bathroom stall and basically was just begging me and continually pleading me to just, like, have sex with him,” he told producers. “I was basically like, ‘No. I really just do not feel comfortable with it.’”

Sam recalled noticing Charlie’s “distressed” demeanor, but he didn’t find out about the alleged incident until after their team competed. “It just made me so angry, and it made me lose even more faith, I guess, in having a safe community in cheer,” said Sam, claiming Harris then began sending him sexual messages as well. “It made me feel super uncomfortable... and I really didn’t know anyone else to talk to about it than just the two of us, and it almost felt like we were alone.”

Kristen submitted multiple complaints to local cheerleading gyms affiliated with Harris as well as the U.S. All Star Federation but claimed the organizations largely ignored the reports, so she went to the FBI, and an investigation was underway less than a week later. “After me and Sam spoke out, pretty much all sense of community was completely ripped away from me and Sam. It was just terrible,” Charlie said. “Pretty much at competitions, me and Sam would walk down the hallway, and everyone would just be staring at us, pointing at us and whispering, and we would just feel so uncomfortable, so different, and so isolated.”

Despite facing backlash, Charlie and Sam told producers they have no regrets about coming forward and would do it again if given the choice. “It definitely has brought into focus for us why so few people come forward and speak out about this because it is extremely difficult,” said Kristen. “The boys wanted to communicate through their example that we believe very strongly that victims of sexual abuse do not to hide their faces in shame.”

Shortly after Harris was arrested, La’Darius Marshall and Gabi Butler publicly reacted to the news on social media. “As a victim of sexual abuse as a child, I know all too well the pain of experiencing this type of abuse and the difficulties it can create for life after such trauma,” read an Instagram post from Marshall, who called Harris his best friend in Season 1. Butler expressed “shock” and sadness towards the situation, writing, “Ever since I heard the news I have gone back and forth between sobbing uncontrollably and trying to wrap my head around why something like this could happen.”

In Episode 5, Harris’ ex-teammates further detailed their respective experiences learning about his criminal charges. “I was here in my room when I got the call about Jerry,” said Butler, choking up. “I literally couldn’t wrap my head around any of that. I felt like someone had just died.” Marshall found out via Twitter, immediately called Butler, and the two “bawled” together.

Toward the end of the episode, viewers learn Butler and Marshall have since developed conflicting feelings towards the accusations against Harris. “I would have snatched him up if I ever would have known about any of this stuff. I feel like it would have been worse than him going to jail,” Marshall said with passion. “I don’t care how famous you are, how much money you got, how much people love you. That don’t give you the right to do stuff like this, especially when one of your best friends you know went through something like that.”

Butler, on the other hand, still has love for Harris and refuses to completely shut him out of her life. “I don’t agree with what he was accused of or condone it at all, and it is very unfortunate, and it breaks my heart,” she explained. “But it’s literally like your family. How are you just gonna hate your family? I feel like people expect me to be like, ‘Well, you should hate him, and you should never speak to him again,’ but the thing is, I can’t. Like, I cannot, and I won’t. I can’t turn my back on him because he was there for me when I needed it.”

More like this
Brittany Snow Files For Divorce From Tyler Stanaland After 'Selling The OC' Drama
By Grace Wehniainen and Radhika Menon
RHOP’s Robyn Dixon Explained Why Juan Paid For Another Woman's Hotel Room
By Brad Witter
'RHOSLC' Star Jen Shah Refuses To Do A Post-Sentencing Interview With Andy Cohen
By Brad Witter and Jake Viswanath
Everything To Know About 'The Real Housewives Ultimate Girls Trip' Season 4
By Jake Viswanath
Get Even More From Bustle — Sign Up For The Newsletter
From hair trends to relationship advice, our daily newsletter has everything you need to sound like a person who’s on TikTok, even if you aren’t.