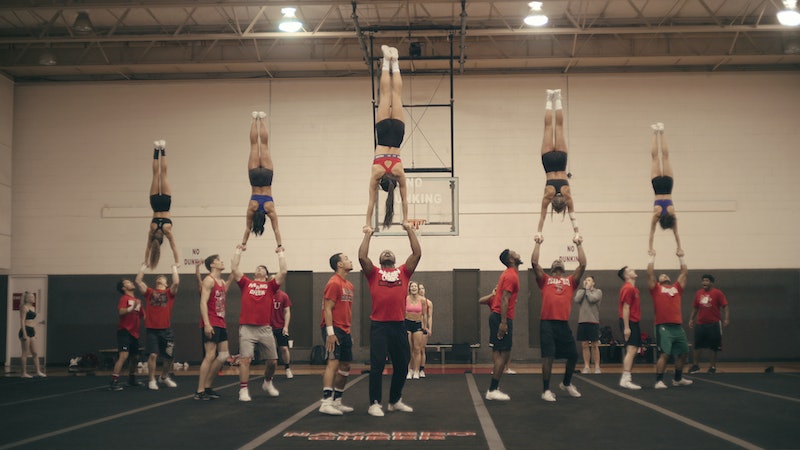 If, like many, you devoured both seasons of Netflix's docuseries Cheer faster than you can spell out your alma mater and spent significant time uncovering the mystery of #FIOFMU (currently accepting your theories by email), you're probably struggling to leave behind your fascination with the mat. Judging by the Instagram accounts of the Cheer cast, so are they. Because while these phenomenal specimens of cheerleading prowess sometimes post Christmas snaps or vacation selfies, most stick to pom-poms, pyramids, and posing with their mammoth National Championship trophy. Because you can take the cheerleaders out of Daytona, but you can’t take the cheer out of them.

The good news is the cast of Cheer is pretty active online, posting photos of them hanging out when the TV cameras aren’t lurking. Sometimes, they’re not even in sports gear or anything. #Rebel. Plus, after massive spikes in their social media following, the squad knows a thing or two about serving heart-worthy Instagram content. (Jerry Harris, the breakout star of the series, is notably absent from the list since his Instagram account has been deactivated following his September 2020 arrest and charges of producing child pornography.)

So if two seasons’ worth of pikes and back handsprings aren’t enough to sate your Cheer appetite, see what the squad’s been up to online, including who has moved on from the long, grueling two-a-days of Corsicana, Texas.

The account of head coach Monica Aldama, which now boasts over 633,000 followers, offers proof that life goes on in Corsicana, Texas, even when Netflix cameras aren't there to capture it – including sneak peeks from cheer practice plus the squad’s impromptu karaoke sessions. These days, catch the Navarro College Athletic Hall of Famer and recent Dancing With the Stars alum hang out with her year-old pup, Mila, and promote her new book, Full Out.

Lexi Brumback got kicked off the squad for a hot minute, but her sabbatical didn’t last long. Is she back on the team for good or did she eventually retire her pom-poms? Her 719,000 Instagram followers will likely know after watching the second season, which she returns for. But even if she’s no longer on the team, her social media feeds still feature the occasional photo with her Cheer castmates and video of her jaw-dropping tumbling skills. Plus, she also serves looks with her dual-toned bob.

One of the biggest breakout stars from the show, Gabi Butler left Navarro and currently cheers for Utah’s Weber State University. Her vulnerability on the show led to a massive Instagram following of 1.8 million – and she’s definitely not stingy with her cheer content. She routinely posts behind-the-scenes footage of her complicated lifts as well as shows off her toned physique via travel shots.

James Thomas may no longer be with the Navarro cheer team, but his Instagram account is still cheer-sessed. When he’s not posting alongside his former teammates (“your Best Friend could never,” he wrote on a photo with Mackenzie Sherburn), he shares snippets from his new job as a coach at Mustang Cheer, a dance/training studio. His trainees, a group of young girls, even bagged the top spot at a cheer competition.

Alas, Morgan Simianer is no longer cheering (she graduated last year), but she has been busy collaborating with beauty brands like Conair and St. Ives, flying planes, and being cute with her boyfriend, Stone Burleson. Luckily, she shares it all with her 1.1. million fans.

La’Darius Marshall has sadly hung up his Navarro uniform. The only solace to be found in this difficult time is that La’Darius confirmed he’ll return for Season 2. Like James, he, too, coaches kids at a dance center (Cheer Athletics Pensacola) and is sustaining his mantra of "king status for the rest of my life.”

Austin Bayles joins Sherbs at Texas Tech. , wears glasses sometimes. On his last cheering event, he posted a touching tribute on Instagram, writing, “5 amazing years on the sidelines all leading up to tonight. One last time repping the double T in the Jones.”

This former North Carolina flyer — she’s now with the South Carolina Gamecocks — has perhaps the most cheer-centric IG of all. Her bestie is Justin Hinsley. Her besties plural are Hinsley, Austin, Morgan, Brooke Dumas, and Ryan Bartley. Her #roomie4life is Kassidy Warnol. Her queen is, obviously, Monica.

Tough-talking Justin "attitude is everything" Bouvier's IG is a confection of artsy coffee shots, topless selfies, and his best friends.

TT Barker did not have a significant storyline of his own in Season 1, but he headed back to Navarro for a third year before graduating last May. These days, he’s cheering for Texas Tech University with Austin and Sherbs.

A fact that Cheer hid from us is that Ashlee Sawai found love on the mat. Now, she and Navarro squad member Sydney Andalio are living and cheering together in New Zealand. She doesn’t post much, but when she does, it’s sweet.

On top of being Monica's right-hand man, Andy Cosferent is the owner of CheerSource: "We are not in the cheerleading business teaching people, we are in the people business teaching cheerleading!" When he’s not jetting to Paris or Milan or taking his cheer expertise to Las Vegas, catch him spending quality time with loved ones.

If reading this post leads to you becoming a member of the Navarro squad and following the impressive athletes, you can repay the favor by sharing what #FIOFMU means.