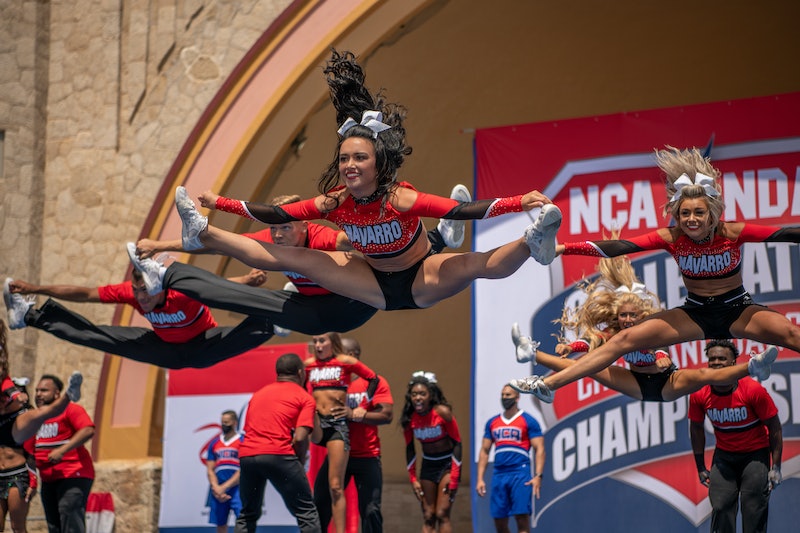 Though Cheer Season 2 set out to document Navarro’s pursuit of another big win at Daytona’s 2020 NCA National Championship, lockdown put those plans on hold. Varsity canceled that year’s event, forcing Navarro to regroup and focus their efforts toward 2021 — and even then, world affairs were far from the only problem they were dealing with. Season 2 highlighted tension between Coach Monica Aldama and La’Darius Marshall, who ultimately quit the team (he later showed up to Daytona to support Navarro and reconcile with Monica). Meanwhile, the entire squad was also reeling from Jerry Harris’ 2020 arrest.

To top it all off, there was mounting pressure from Coach Vontae Johnson’s team at Trinity Valley Community College: Navarro’s neighbor and fiercest rival. With impressive new athletes like Angel Rice on the squad, the team was eager to prove themselves after losing to Navarro in Season 1. In recruiting former Navarro choreographer Brad Vaughan, TVCC was able to hone their performance style even further, making them an even bigger, more personal threat.

So, how did it all go down? For TVCC, things were a bit rocky at first. The Cardinals didn’t land their pyramid, and tumbler Devonte “Dee” Joseph couldn’t complete part of his routine due to a failed landing on his knees. However, the team’s Day 1 results weren’t so bad that they would prevent the Cardinals from rallying for a comeback. And that, they did. After a postmortem pep talk in which TVCC Coach Khris Franklin implied the judges were rooting for them, too (“These scores tell me that they want it to be you”), the team shook off their mistakes and went on to have a successful Day 2.

Navarro, on the other hand, had a great first outing — but their crucial mistake happened the next day when flyer Gillian Rupert fell during a crucial moment. Her teammates caught her, and she wasn’t hurt, but it was an error nonetheless. She left the stage in tears once the routine was over. Though none of her fellow Bulldogs blamed Gill, the slip-up seems to have been enough to knock Navarro off their reigning champ pedestal. Ultimately, TVCC won the 2021 NCA National Championship in Daytona by a narrow margin of .1584, and Navarro walked away with their heads held high and without securing their 15th championship.

Cheer Season 3 has not been confirmed just yet, but given the way Season 2 kept production under wraps until the very end, it’s possible they could be secretly filming more Navarro-TVCC drama as we speak. Of course, you can always keep up with both teams (still helmed by Aldama and Johnson, respectively) in real-time. This year’s NCA National Championship in Daytona takes place April 6-10, per Varsity, and ahead of the big event, Gabi Butler shared what seems to be Navarro’s NCA routine on TikTok.

Bleacher Report’s Arielle Chambers tweeted that the video was Navarro’s Daytona routine, and Andy Simon, Sabres Cheer alum and cheer videographer, said it was part of the NCA Showoff — an opportunity for teams to display their routines ahead of the actual competition.

After two days of competition, Navarro was announced as the winner of their division. The team earned an overall event score of 99.2130, beating TVCC’s 97.7084.

More like this
'Bling Empire: New York’ Star Tina Leung Has A Superhero Alter-Ego
By Alyssa Lapid
Netflix Shut Down 'Bridgerton' S3 Rumours About A “Very Dark” Storyline
By Bustle
'The Queen’s Gambit' Season 2 Tweet Wasn’t From Anya Taylor-Joy
By Mary Kate McGrath, Jack Irvin and Grace Wehniainen
'The Crown' Season 6 Has Suspended Filming "Out Of Respect" For The Queen's Death
By Bustle Staff
Get Even More From Bustle — Sign Up For The Newsletter
From hair trends to relationship advice, our daily newsletter has everything you need to sound like a person who’s on TikTok, even if you aren’t.