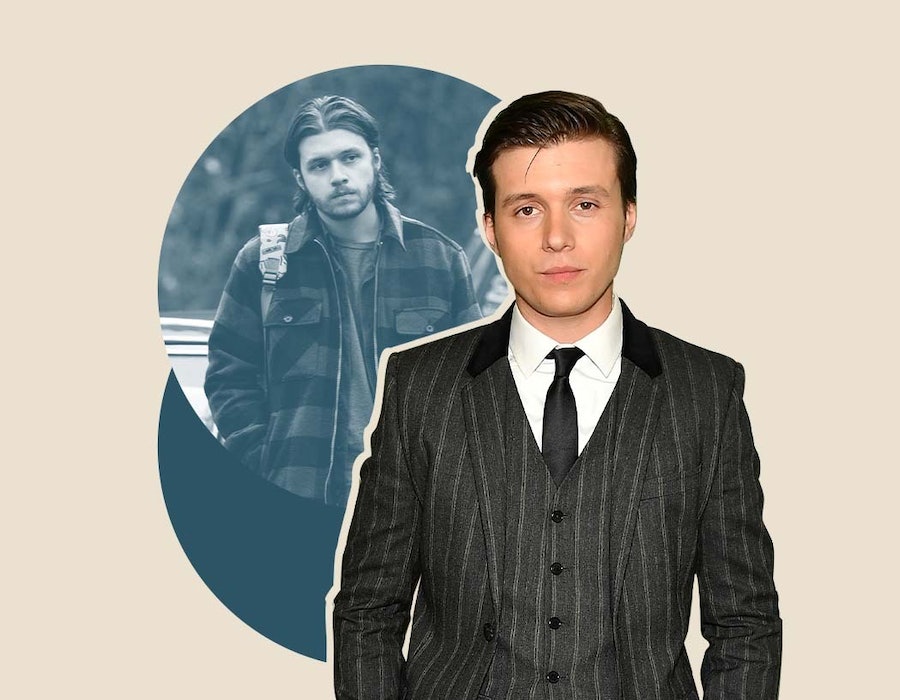 Sitting in a trailer in the quiet, grassy plains of British Columbia, Nick Robinson found himself wanting a bit more noise. The solution? Blast Eminem’s “‘Till I Collapse.” “The intro just goes so hard,” Robinson, 26, tells Bustle. He was living in the province while filming the Netflix miniseries Maid, and the song’s intensity, along with thematic parallels between the rapper’s life and that of his character Sean (both grew up in poverty, became young fathers, and struggled with addiction) helped get him in the zone before filming. “[I was] trying to tap into Eminem’s frustration and anger,” Robinson says from his home in Los Angeles, laughing as he scrolls through Spotify while revisiting his on-set anthems.

Lounging in his living room, the lighthearted Robinson couldn’t seem further away from the emotional turmoil of a track off The Eminem Show. But the 26-year-old actor known for roles as fresh-faced high-schoolers is nearly unrecognizable as Sean, an addict and emotionally abusive ex to Margaret Qualley’s down-on-her-luck house cleaner Alex in Maid. His face is puffy and brined from alcohol; his cheeks patchy with fuzz. There’s enough grease in his hair to fuel an engine. “Looking like a dirtbag dad definitely helped get into character,” Robinson says, flipping his still-stringy hair from side to side.

Robinson’s career has been marked by playing likable characters in complicated circumstances, from Love, Simon’s closeted gay high school student to A Teacher’s Eric Walker, a quintessential popular boy who engages in a sexual relationship with his teacher and is left to reckon with his resulting trauma. “It was a welcome challenge to play someone who is not that likable. Who is not the hero or a good guy. To play somebody who is really struggling with their own demons and trying to be a better father for their daughter,” Robinson says of Sean. “He’s trying to break a cycle of generational trauma and abuse that has been passed down and make a better life for himself. But there’s frustration and anger [because he’s] failing at that.”

Despite Sean’s many issues, there are no clear-cut villains in Maid. Adapted from Stephanie Land’s 2019 memoir of the same name, the source material has been lightly embellished for the screen. Land’s mother, played by Qualley’s own mom Andie MacDowell, is a much larger presence, as is Sean (known as Jamie in the book), whose heightened struggle to get sober and do better by his daughter is one of the show’s most nuanced narrative arcs. Yet amid the tweaks made in Maid’s journey to screen, a key element of the book remains: Land’s empathy for her characters, despite the trouble they’ve caused her.

Having empathy for Sean even as he hit rock bottom was essential to Robinson’s portrayal. “[Sean] was dealt a bad hand in life. He depends on alcohol to cope with his own trauma,” Robinson says. “I feel like I have known [people like] Sean, [who] would give you the shirt off their back, but were also very damaged.”

How a man should behave is a topic that’s been woven into much of Robinson’s work, from Love, Simon to A Teacher to Maid. His work has begged the questions: Does homosexuality negate masculinity? Can you identify as a survivor of sexual abuse and still consider yourself a man? Is the pursuit of self-improvement antithetical to being “macho?”

Robinson is still grappling with the nuances of each. “The frustration of toxic masculinity is not being able to express yourself or your emotions for fear of being viewed as weak or vulnerable,” he says. “I think that is a lot of what these characters are dealing with.”

Yet this prescriptive version of manhood is something that Robinson says he’s been able to evade in his own life. “I never really saw myself as what you might consider to be the ‘traditional masculine type.’ I wasn't a jock. I wasn't like a bro, necessarily,” he says as his girlfriend’s cat, Remix, enters the Zoom frame. Robinson’s been traveling for work and Remix — a 6 or 7-year-old stray found on the streets of Bushwick — is “starved for attention.” “I'm learning about these terms alongside everybody else.” He gently moves the cat away from his face in one loving swoop. Remix, it seems, has found Robinson just as easy to like as everybody else.