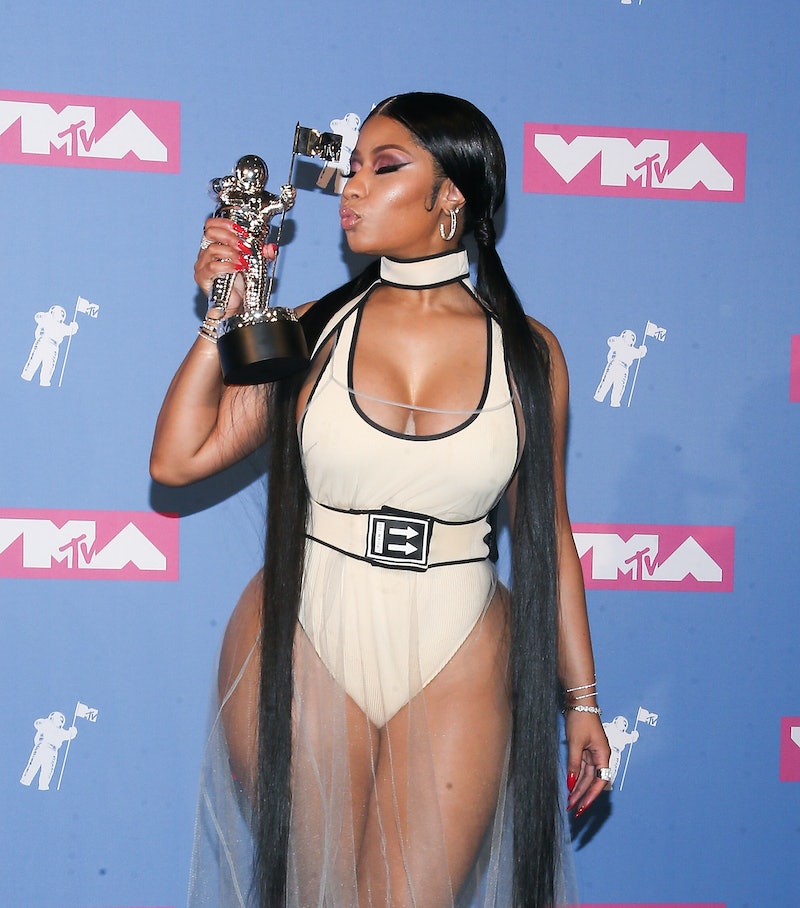 In Nicki Minaj’s latest single, “Super Freaky Girl,” she raps, in her famous Roman persona, “My old tape sold more than your album.” Super fans of the Queen of Rap can probably connect the dots — this bar is most likely a reference to her 2021 re-release of the 2009 “Beam Me Up Scotty” which debuted at No. 2 and made history.

Of course, “Beam Me Up Scotty” wasn’t the first record-breaking, income-generating album to come from Minaj. The rapping sensation has been making history — and millions of dollars in income — for years. It’s no wonder the rapper is set to receive the Michael Jackson Video Vanguard Award at the 2022 MTV VMAs. Her single, “Super Freaky Girl,” became her first Hot 100 No. 1 single as a solo artist on Aug. 22, Billboard reported. It’s also her third No. 1 single overall.

With four successful studio albums and 121 singles under belt, Minaj is officially rapping royalty. And that’s not all — these days, she’s the Queen of her own business empire. “The female rappers before me, I would always say they should have retired as moguls. And I would say, ‘Why isn’t there a female version of Jay-Z, who at that time, even when I was coming in, we could see that he was on mogul status,” she told Joe Budden earlier this year. “So I was like, ‘I’m gonna be that person, I’m gonna do that. Even what I’ve done, I haven’t done what I want to do, what I need to do, what I will do yet.” Based on her jaw-dropping net worth, she had done exactly what she set out to do.

Minaj said it best herself: “It's a whole lotta money in this motherf*cker.” But how much, exactly? Here’s a breakdown of the Queen of Rap’s net worth.

As a musician, Nicki Minaj has been nothing short of iconic throughout her career. After releasing her first mixtape, Beam Me Up Scotty, in 2009 and signing with Young Money the same year, the rapper exploded onto the scene with singles like “Super Bass,” “Starships” and “Anaconda” — if you’re a Millennial, you’ll know that circa 2012, Minaj was everywhere.

Her debut album, Pink Friday, came in 2010 and quickly broke numerous records becoming one of the most successful albums from a female rap artist ever. According to Worthly, the album has sold more than 1.9 million copies in the US alone.

As a female in the rapping industry, Minaj could have easily been taken advantage of — but that’s not her style. “One thing I learned along the way in business is the necessity for you to be unapologetic about asking for how much money you deserve,” she told Time. “At a very early stage in my rap career, I was making six figures for shows…If I heard there was another rapper making that, I thought, ‘you know what? I get out there and demand or command a crowd. I get out there and make my fans happy. I get out there and give a real show. I want that, too.’ And I pushed myself to be better with my showmanship, but I also decided, you know what? I want to be compensated well.”

These days, Minaj’s icon status in the industry is definitely paying off — and she’s certainly being compensated very, very well. In fact, as Nigerian artist Davido told W Magazine in 2020, “Nicki be charging people $500,000 for verses.”

And that’s not all — her tours have also raked in some serious cash. Apparently, The Pinkprint Tour earned $22 million, while the Pink Friday: Reloaded Tour earned $10 million.

While Minaj is primarily known for her music, she has also made a few noteworthy TV appearances — and, unsurprisingly, she’s enjoyed a pretty big payday each time. She has appeared on Dish Nation, The Real Housewives of Ptomac, RuPaul’s Drag Race, Extra and Saturday Night Live over the years.

However, her biggest TV appearance probably came in 2013 when she appeared as a judge for an entire season of American Idol. According to PopCrush, the rapper took home a total of $8 million for her stint on the talent TV show, while other reports suggest that she had a $12 million payday. Either way, it’s clear that Minaj’s TV gigs have contributed significantly to her huge net worth.

One thing Nicki Minaj never shies away from is a brand deal. After all, as she told Joe Budden this year, her ambition to reach mogul status. Based on her numerous brand collaborations, she is well on her way. Over the years, the rapper has collaborated with numerous fashion, food, makeup and even gambling brands.

One of Minaj’s most successful business ventures is an ongoing collaboration with MaximBet. "Minaj will work with MaximBet on merchandise, parties, partnerships, fan experiences and branding," Maxim announced in 2022. "All designed to bring together entertainment, sports, celebrity and betting."

“All the stuff flew off the shelves,” Minaj later told Budden. “I told Kanye about that. I was like, ‘Hey, look, I’m about to do something and I just wanted to make sure I spoke to you first,’ because I have so much respect for him. He was like, ‘Well if I did something with you, I think my wife…probably wouldn’t love that idea because I should be giving that to my wife instead. If I was doing like a female version of Yeezys or whatever, it probably should go to my wife.’ I understood.”

Minaj is also behind Barbie-Cue chips at Rap Snacks, a black-owned snack business sold in Walmart and Sam’s Club stores.

A significant portion of Minaj’s net worth lies in her property portfolio. According to Hello!, the rapper currently lives in a palatial $10 million home in Los Angeles with her family. The mansion reportedly has six bedrooms, eight bathrooms, a huge entrance hall and a gorgeous outdoor pool overlooking the city.

Minaj previously lived in a seven-bedroom Beverly Hills home that was recently listed at $40,000 a month.

As. ofAugust 2022, Nicki Minaj has a 201 million strong following on Instagram, making the 17th most followed celebrity on the platform — and the only rapper with a following of 200 million.

According to Hopper HQ, this kind of following can generate a serious amount of income. By September 2019, Minaj (who then had just 106 million followers) was reportedly making $651,000 per post. Since then, her following has nearly doubled and, according to Hopper, she now makes over $1 million for every sponsored post.

What Is Nicki Minaj’s Net Worth?

According to Celebrity Net Worth, Nicki Minaj has amassed a fortune of around $100 million thanks to her music, brand collaborations and side projects. Of course, we’d expect nothing less from the Queen of Rap herself — and by the sounds of things, her empire is just beginning to take off.

More like this
Mollie King & Stuart Broad Just Shared The First Pic Of Their Baby
By Sophie McEvoy
Mike Tindall’s High Earnings Amount To A Royal Flush
By Darshita Goyal
Matt Hancock’s Net Worth Is A Political Minefield
By Maxine Harrison
The 'Love, Lizzo' Harry Styles Scene Is Just 1 Moment That Made Fans Feel Seen
By Brad Witter
Get Even More From Bustle — Sign Up For The Newsletter