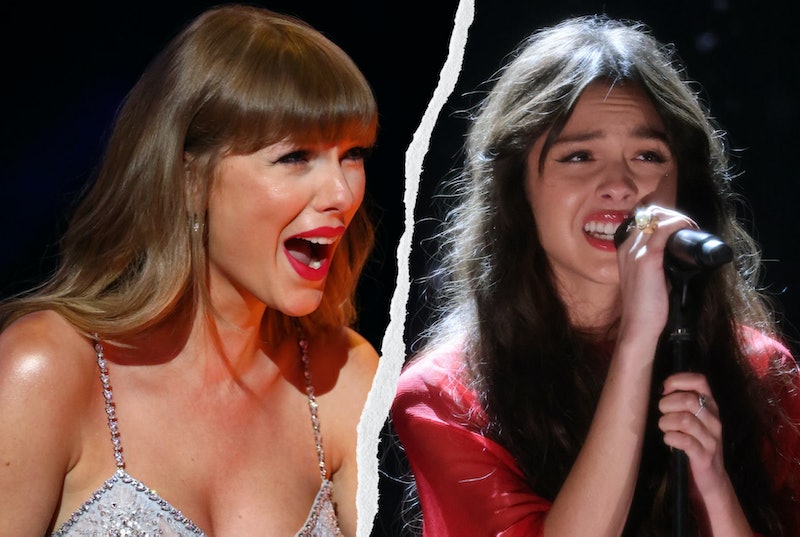 If there was ever a Biggest Swiftie Ever contest, Olivia Rodrigo just might enter. The singer has taken lessons from the school of Taylor Swift ever since she first started writing music, which has led to a very poignant tribute on her debut album SOUR. Rodrigo sampled Swift’s Reputation deep cut “New Year’s Day” on her song “1 step forward, 3 steps back,” so prepare yourself with tissues before listening.

In New Zealand, where SOUR has already come out, fans discovered that Swift and producer Jack Antonoff have writing credits on the song. However, POPSUGAR confirmed that the pair didn’t co-write or co-produce the actual song, meaning that Rodrigo simply interpolated the melody of “New Year’s Day” into “1 step forward, 3 steps back.” It’s a very fitting choice, considering the two numbers in the song title just happened to form “13,” Swift’s lucky number. It appears that Rodrigo is also taking lessons from Swift on how to hide easter eggs in her music.

Rodrigo’s “drivers license” became such a huge hit in part thanks to Rodrigo’s devastatingly personal lyrics, which are filled with such intimate details that come right out of the Swift playbook. Rodrigo has made it no secret how much she looks up to Swift, and soon after premiering her first single, her idol quickly became her mentor, forming an unexpected yet beautiful blossoming friendship.

In early January, “drivers license” took the world by storm — including Swift. After Rodrigo shared an Instagram photo of her song sitting at No. 3 on the iTunes Chart underneath Swift’s Evermore bonus tracks, Swift commented on the post: “I say that’s my baby and I'm really proud,” quoting her mother’s famous GIF. She officially had Swift’s stamp of approval, and as Rodrigo posted on TikTok, she couldn’t emotionally handle it. Soon enough, “drivers license” would go No. 1 on the Billboard Hot 100 and stay there for eight weeks. Swift’s power should never be underestimated, and neither should their ongoing friendship.

On March 3, Swift made their kinship official by sending Rodrigo some very personal gifts that gave her some good luck, as well as a handwritten letter. “She gave me this ring because she said she wore one just like it when she wrote Red and she wanted me to have one like it and all of this amazing stuff, she’s like hand-wrapped these gifts,” Rodrigo told SiriusXM. The singer went on to praise Swift for her immediate graciousness toward her. “I feel so lucky that I just was born at the right time to be able to look up to somebody like her,” she said. “Her support and genuine compassion and excitement for me [has] just been so, so surreal.”

However, Rodrigo made it a point to keep what Swift wrote her private out of respect for their friendship. “I don't want to divulge too much because it’s really sweet and personal, but she talks a lot about how, I think, you make your own luck in the world,” she told Billboard. “And when you do kind things to others, good things come your way.”

On April 8, Rodrigo teamed up with fellow Swiftie Conan Gray to tease the “Taylor’s Version” of Swift’s hits “White Horse” and “You Belong With Me,” from Fearless (Taylor’s Version). In the videos, they re-enacted the “White Horse” lyrics in cowboy hats and recreated the “You ok?” scene from the “You Belong With Me” music video, as Swifties do. After seeing the adorable clips, Swift adopted them as her own. “You ok? NO cause I sent my two kids Olivia and Conan my new version of You Belong With Me and THEY ARE SO CUTE IT PHYSICALLY HURTS ME,” she wrote on her Instagram Story.

Later that month, Rodrigo played ELLE‘s Song Association game, where she covered Swift a grand total of five times, singing “The Story of Us,” “All Too Well,” “Begin Again,” “Picture to Burn,” and “I Think He Knows.” “I told you, it’s all gonna be Taylor Swift,” she remarked, laughing. “I feel bad. I want to branch out, but I just have her lyrics tattooed in my head.”

May: Olivia Finally Meets Her Idol

Rodrigo and Swift finally met in person at the 2021 BRIT Awards on May 17, and then shared the encounter on Instagram. Swift accepted the Icon Award at the ceremony, while Rodrigo was present to perform “drivers license.” And given how Rodrigo only captioned her post with emojis, it’s safe to say that she was speechless.

After fans lapped up the surprise sample on “1 step forward, 3 steps back,” Rodrigo explained why she decided to use the chords of “New Year’s Day” from Swift’s Reputation album on her Sour track in a June 1 interview on The Zach Sang Show. “I came up with the ‘1 step forward’ concept, and I sort of wrote a verse and a chorus,” she said. “I was in the car on a road trip, and when I got home, I decided to sing it over the chords of ‘New Year's Day.’ I think they’re really beautiful chords. I was lucky enough to get that approved, and it's on the record now.”

While fans initially thought that Rodrigo crafted the track’s lyrics as a nod to Swift, considering that the numbers in the song title add up to Swift’s lucky number 13, she negated that theory, explaining that the concept of “1 step forward, 3 steps back” has been in her head for a while. “Somebody texted it to me once, and I was like, ‘Ooh, that's really interesting. I’ve never heard somebody say something like that’,” she said. “I thought it would be a cool way to describe this toxic, sort of manipulative, relationship.”