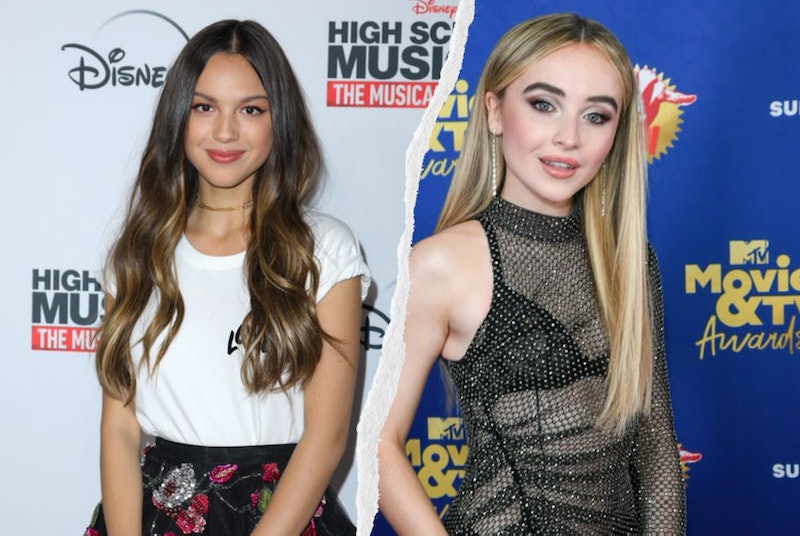 Immediately upon its release, Olivia Rodrigo's "Drivers License" sparked discussion of an alleged Disney star love triangle behind it. In case you've missed out, fans believe Rodrigo wrote the song about her High School Musical: The Musical: The Series costar Joshua Bassett, who supposedly left her for fellow Disney star Sabrina Carpenter. Shortly after its release, Bassett and Carpenter dropped their own singles, "Lie Lie Lie" and "Skin," respectively, that fans have embraced as responses to Rodrigo's hit. However, the stars themselves haven't confirmed the inspiration behind them. While that hasn't stopped everyone from fans on social media to the cast of SNL from speculating, Rodrigo set the record straight about her alleged feud with Carpenter once and for all in a new interview with Radio.com.

“I actually don’t know her at all," Rodrigo told the site in true Mariah Carey fashion. "I think we met once or twice in passing, but I’ve never had a conversation with her." And don't expect Rodrigo to drop a response track to "Skin" anytime soon. "I don’t think I could write a song that was meaningful or emotional about somebody that I don’t know," she added. “I think artists should be able to write about whatever they want to write about.”

Rodrigo previously opened up to Billboard about the speculation around "Drivers License" in January. "I totally understand people's curiosity with the specifics of who the song's about and what it's about, but to me, that's really the least important part of the song," she said. "It's resonating with people because of how emotional it is, and I think everything else is not important."

After "Skin" was released, fans immediately noticed a line in the song that appears to reference the lyrics of "Drivers License." Carpenter detailed the inspiration behind the track on Instagram. "Thank you to everyone who has listened to 'Skin,' especially those who have opened their minds to lyrically what I was trying to get across," wrote the singer upon its release. "I wasn't bothered by a few lines in a (magnificent) song and wrote a diss track about it."

"I was at a tipping point in my life for countless reasons," continued Carpenter. "So I was inspired to do what I usually do to cope, write something that I wish I could have told myself in the past."

As "Drivers License" sits atop of the Billboard Hot 100 for its seventh consecutive week, Rodrigo revealed to Radio.com that she's thinking about how to follow it up. “I would be lying if I said I didn’t feel like any pressure after ‘Drivers License,’" she said. "But I really just don’t write songs for them to chart or to even put them out. I really just love writing songs; it’s my absolute favorite thing in the whole world to do."

Rodrigo also noted that she plans to release a project this year. Perhaps she and Carpenter can officially meet, put the alleged drama behind them, and record a duet that'll top the charts for months.