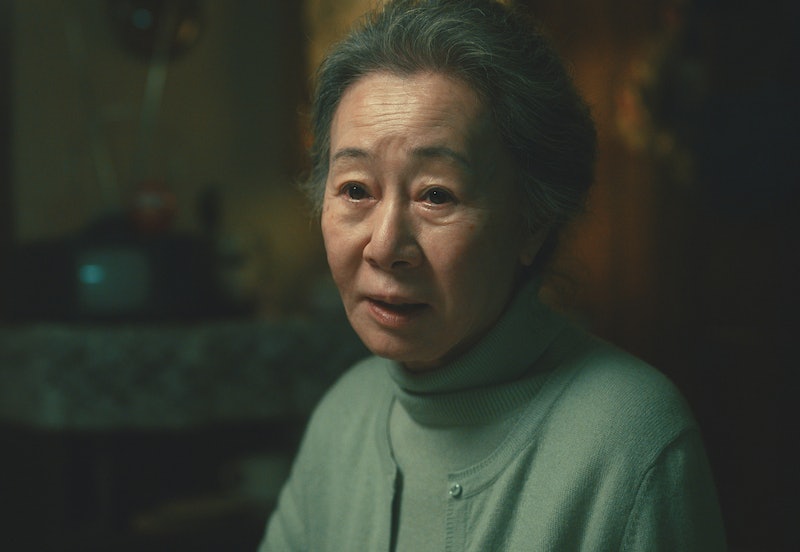 Spoilers ahead for Pachinko Episodes 1-3. When Pachinko was published in 2017, the novel was praised for its intimate and sweeping depiction of a Korean family across four generations. Matriarch Sunja served as its engine, embodying strength and fortitude after surviving Japanese colonization as a child and moving to Osaka, Japan. But the new AppleTV+ adaptation of the book broadens the story, splitting the once chronological narrative into two timelines and giving Sunja (played at different ages by Jeon Yu-na, Kim Min-ha, and Minari grandma Youn Yuh-Jung) a co-lead in her grandson Solomon (Devs star Jin Ha.)

In the novel, Sunja’s story starts in 1910s Korea. Solomon doesn’t appear until the last third of the story, which takes place in 1989, when he travels from the U.S. to Japan to convince a Korean woman to sell her home so he can nab a promotion at his bank. Rather than focusing primarily on Sunja, showrunner Soo Hugh wanted the TV series to have more widespread appeal. “I didn’t want it to feel like we were watching a period drama of a time and place that no one is familiar with,” she told Vanity Fair. By elevating the character of Solomon, she aimed to provide “a conversation with the past” while giving younger viewers a more modern (and more Americanized) character to relate to. However, shows like Bridgerton, The Crown, Gilded Age and the popular Korean drama Crash Landing On You have proven that audiences love period pieces. And compared to the cold and business-minded Solomon, the character that most resonates is Sunja, not him.

Pachinko opens during the Japanese occupation of Korea, which began on Aug. 22, 1910 and lasted until August 1945. During that time, Koreans like Sunja and her parents were treated as second-class citizens and forced to assimilate to Japanese culture in their own country, fearing arrest or even death for the smallest slights. Through Sunja, the constant indignities of living under Japanese occupation are deeply felt: the Japanese mock how Koreans speak, smell, and eat, and Sunja is nearly sexually assaulted because two Japanese men feel they’re owed her body. “I always imagined [the Japanese] ... like a huge mouth ready to swallow,” Sunja says in Episode 2.

These events ripple into 1989, where we see how these injustices have hardened the now elderly Sunja. She moved to Japan out of necessity, determined to survive, but things haven’t gotten much better for Koreans in the country. When Solomon arrives, she warns him that he’s safer in America. (Koreans weren’t granted permanent residency in Japan until 1991. They had to work low wage jobs and couldn’t vote for years, and racial discrimination against them persists today.)

After Sunja’s sister-in-law Kyunghee dies, she bottles up any sadness she feels, claiming it’s not worth dwelling on the past. But the softer side we saw in Sunja’s earlier years resurfaces when Solomon takes her to meet his stubborn client, a Korean woman who serves them rice grown in Korea. Sunja immediately sobs at the distinct taste of the rice, recalling old memories with her mom. “Don’t look down on her tears. She earned the right to those,” the woman tells Solomon, recognizing Sunja’s pain as her own.

In contrast to Sunja’s emotional journey, Solomon’s quest to climb the corporate ladder feels both less unique and less sympathetic — largely because his success involves convincing a Korean woman to let go of part of her past that shaped who she is. His story does delve a little into the tension between his ethnicity and his nationality — a friend jokes that Koreans eat out of bowls like dogs, and he switches to speaking Japanese when he’s irritated at Sunja — but these are brief moments that could have been explored on their own terms in later seasons, rather than being sandwiched in.

Roger Ebert once wrote that the more specific a story is, the more universal it becomes, “because the more it understands individual characters, the more it applies to everyone.” But Pachinko takes the opposite approach, significantly condensing Sunja’s coming-of-age tale in Korea in order to make space for Solomon, whose more contemporary journey is allowed to unfold slowly over a year. Meanwhile, Sunja is held at arm’s length in the 1989 timeline and — through Solomon’s eyes — viewed as a puzzle to be solved.

It’s true that Pachinko’s historical context may be unfamiliar to American audiences. And it’s also true that the book eventually delves into the two generations that come after Sunja. But I wish that Pachinko had trusted that Sunja was enough to carry the show.

More like this
A 'Terminal List' Sequel & Spinoff Are Reportedly In The Works
By Kadin Burnett and Grace Wehniainen
You Might Want To Rewatch This Key 'On My Block' Scene To Understand 'Freeridge'
By Grace Wehniainen
The 'Freeridge' Cast Shared Their Hopes For A Potential Season 2
By Grace Wehniainen
Pamela Anderson's Sons Brandon & Dylan Have Their Own Hollywood Careers
By Arya Roshanian
Get Even More From Bustle — Sign Up For The Newsletter
From hair trends to relationship advice, our daily newsletter has everything you need to sound like a person who’s on TikTok, even if you aren’t.