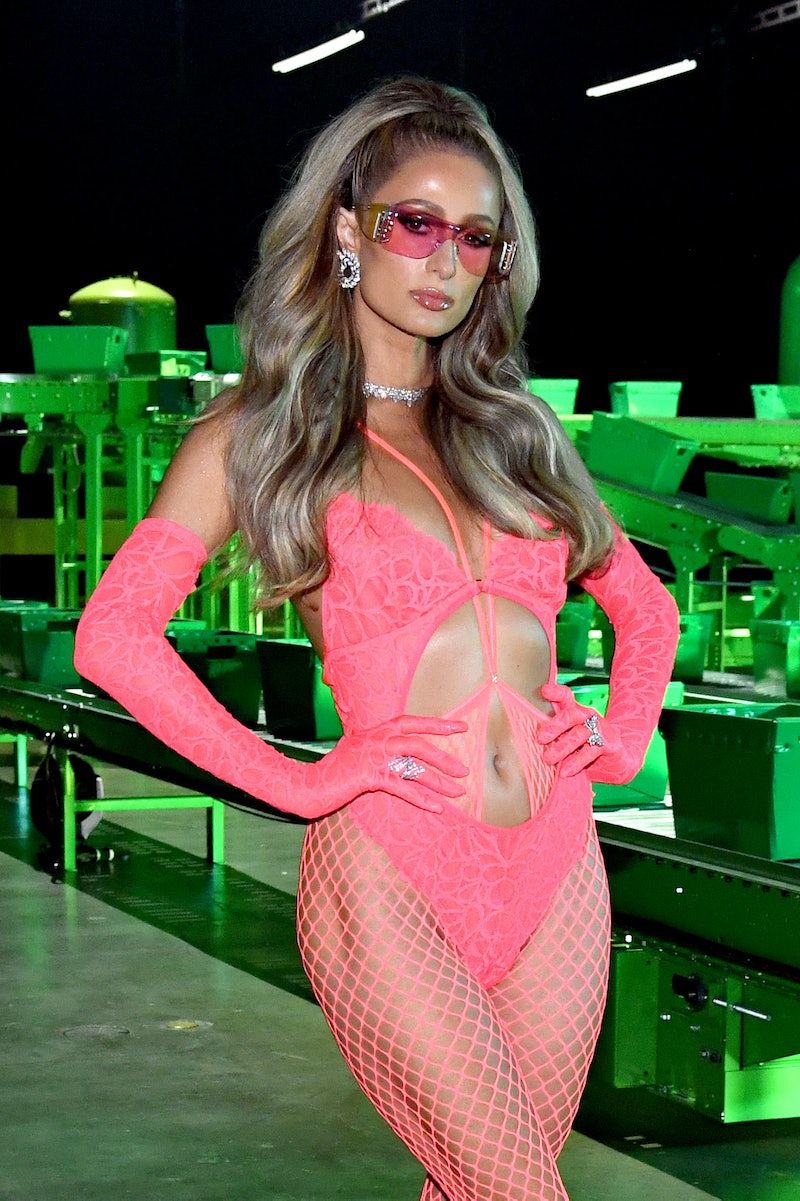 What do Michelle Obama, Hillary Clinton, Prince Harry, and your college roommate have in common? They've all launched podcasts in the last year. Joining their ranks is Paris Hilton's debut iHeartRadio podcast, This Is Paris, People recently reported. Hilton, 39, is entering the world of podcasting on Feb. 22 as part of a three-year deal with iHeartMedia and Hilton's audio company, London Audio.

Hilton confirmed the news on Instagram last week by posting a video in what appears to be her Hello Kitty-adorned recording studio. Wearing a rhinestone-embellished top, the host invited podcast guest suggestions in the comments section. Her mother, Kathy Hilton, Real Housewives of Beverly Hills star Lisa Rinna, and social media influencer Tana Mongeau were among Hilton's well-wishers on Instagram. "Audio is a medium that has no boundaries, and I am excited to partner with iHeartMedia to bring my series and many others to such a diverse audience," Hilton said in a statement via People. "They bring the creative platform and scale to help me further connect with millions of fans across the world."

A press release touts This Is Paris as "a blend of both playful, emotional and authentic scripted, scheduled episodes as well as spontaneous, shorter 'social' audio episodes each week between segments" that will also include "candid interviews" about everything from pop culture and fashion to beauty and wellness. Hilton's first podcast is one of seven projects she'll produce for iHeartRadio alongside Bruce Gersh, the New York Times reports. The other six shows will reportedly feature different hosts.

According to The Times, Hilton will upload bite-sized "Podposts" (one to three minutes) in between full-length interview episodes (about 45 minutes). Each mini installment references one of Hilton's notorious soundbites, including "That's Hot" for product suggestions, "Loves It" for pop culture faves, and "This Is my Hotline" for answering fan queries via voicemail.

This Is Paris shares a name with Hilton's recent YouTube documentary, which premiered in September 2020. The doc showcased an entirely different side of Hilton and detailed her alleged physical and emotional abuse as a teenager at Provo Canyon School boarding school in Utah. It was also an opportunity for her to defend the heiress persona she invoked for her reality series The Simple Life, which followed Hilton and fellow socialite Nicole Richie.

When asked about the contrast between her true identity and the role she often plays in public, Hilton told CBS Sunday Morning, "There's so many differences. With the character, it's mostly kind of this blonde, bubbly, kind of Barbie airhead. And in real life, I'm the exact opposite. I'm not a dumb blonde, I'm just very good at pretending to be one." The This Is Paris podcast will likely see Hilton continue to dismantle misconceptions about who she truly is. Richie has similarly denounced her A-list partier past with projects including NBC's Tina Fey comedy, Great News and parody VH1 series, Candidly Nicole.

The first episode of This Is Paris will be available on Feb. 22 for download via iHeartRadio Podcasts and Apple Podcasts.

More like this
Paris Hilton Just Shared The First Photo Of Her Baby
By Sam Ramsden
Everything To Know About 'The Real Housewives Ultimate Girls Trip' Season 4
By Jake Viswanath
Andy Cohen Apologized To Larsa Pippen After A 'RHOM' Season 5 Reunion Dust-Up
By Brad Witter
'Bachelorette' Vet Clare Crawley Unveiled 2 Special Wedding Day Accessories
By Stephanie Topacio Long
Get Even More From Bustle — Sign Up For The Newsletter
From hair trends to relationship advice, our daily newsletter has everything you need to sound like a person who’s on TikTok, even if you aren’t.