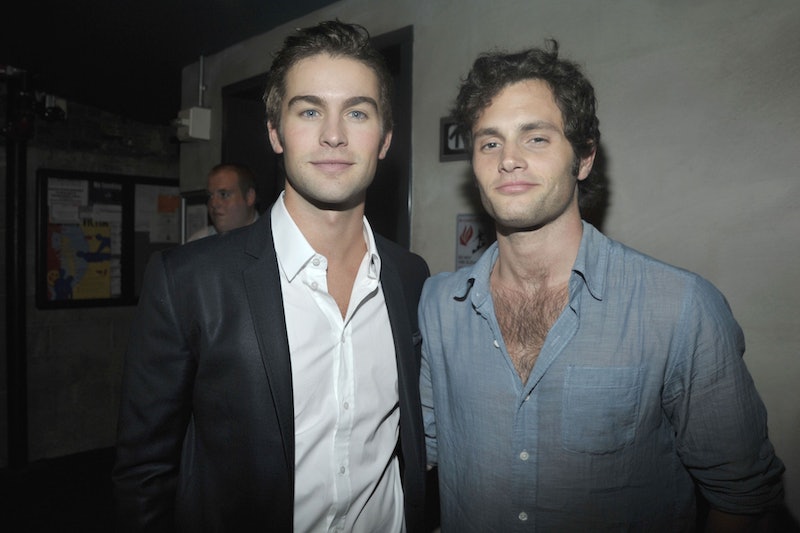 Spotted: Lonely Boy and Golden Boy are back at it again. Penn Badgley had a Gossip Girl reunion with co-star Chace Crawford on the July 13 episode of his podcast PodCrushed, where the two — known as Dan Humphrey and Nate Archibald to viewers — reminisced on filming the former CW show in New York City in the mid 2000s. The actors even made an unexpected comparison, saying their experience was like being Mickey Mouse at Disneyland.

Crawford admitted that there were “a lot of negatives and positives” to filming the series in the heart of New York, where fans would follow the stars around everywhere. “New York City, I have this romanticized love for, I’m still in love with that city because of it,” he said. “But we were given the keys to the city at a crazy time, a lot of partying and access to different things that you can sort of get caught up in. That was, at the same time, okay in your early 20s and a lot of fun, but you are kind of like Mickey Mouse to Disneyland, you know. People see you and you’re like this character in this city.”

Badgley started laughing at the analogy, calling it a “funny” but accurate metaphor. “You are like Mickey Mouse at Disneyland, which is to say you’re a faceless person inside of a suit who cannot be seen or heard, who everybody’s taking pictures with,” he said.

While acknowledging that they had a lot of the same experiences, Badgley said he and Crawford had felt differently “in some of the most superficial ways” as he wasn’t able to relate to Crawford’s partying ways at the time. “That whole keys to the city thing — it’s so silly because... it’s not a sensitive topic, but at the time it was — I did not feel, I still felt like I didn’t know how to get into the club… literally the clubs,” he said. “I didn’t go out as much as the rest of the crew and I often felt uncomfortable because I didn’t feel like I was as easily able to get in.”

However, Crawford felt that Badgley handled the public pressure of Gossip Girl a lot better than he did. “I’m a little bit more on the private side. I mean, I’m extroverted, but it created a little bit of paranoia,” he explained. “I don’t know about you, Penn. I feel like you dealt with it amazingly, but I definitely had gotten a weird paranoia.”

This isn’t the first time that the Gossip Girl boys have reunited in recent years. In June 2020, Badgley and Crawford did an Actors on Actors interview for Variety, where they talked about their current roles on YOU and The Boys, respectively. But of course, they couldn’t resist reflecting on Gossip Girl a little bit, with Badgley revealing that he rewatched some episodes with his now-wife Domino Kirke, which he said was “very hard” to watch.

“These snapshots of yourself when you’re 20, 21, 22 years old. Who can enjoy that?” he asked. “Sometimes it’s just uncomfortable.” That said, the two vowed to do a rewatch when they could get together in person. “Dude, if we live-tweet a viewing of any episode of Gossip Girl, people would love that,” Crawford said. Dan and Nate, we’re still waiting.