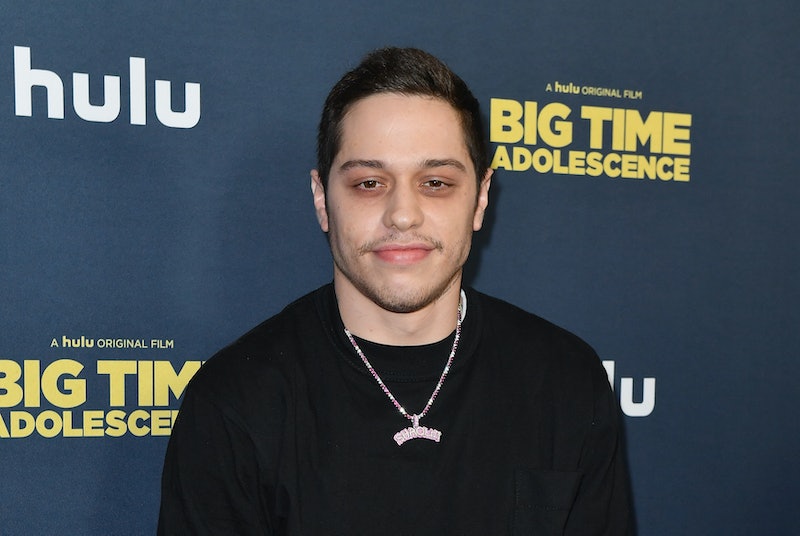 You don’t need to be a religious Saturday Night Live viewer to hear about Pete Davidson these days. Maybe you’ve been following him through films like The King of Staten Island or his TV series The Freak Brothers. Or maybe, more recently, you’ve been keeping up with his love life as the stars’ boyfriend du jour. If you missed it (impossible), he’s reportedly been hanging out with Kim Kardashian after the pair was spotted holding hands on a Knott’s Berry Farm rollercoaster last month.

Of course, through it all, Davidson’s home base for the last seven years has been SNL’s Studio 8H. Although he teased this year he may be “ready to hang up the jersey” soon, he’s still a beloved part of the cast today. But the comedian recently revealed that he has a case of imposter syndrome and doesn’t always feel his comedic best on the show. “I’ve definitely never felt less funny” than on SNL, Davidson explained during a Nov. 8 appearance on Late Night with Seth Meyers.

“I don’t know if you’ve ever felt that way,” he told Meyers, an SNL alum. “But, like, when I’m there, I’m just like, ugh, I’m garbage.” He continued, “You watch Kate [McKinnon], or Chloe [Fineman], or Kenan [Thompson] do, like, a hundred million things. And then my line will be like, ‘Hey, everybody!’ So it’s just, like, you know, I know my place.”

Hmm... calling fact-check on that one. Sure, he’s not totally wrong about the “hey, everbody!” bit — anyone who’s seen a “Chad” sketch knows Davidson has a penchant for deadpan delivery in ridiculous situations (from ghost encounters to fantasy realms to the Red Planet with Elon Musk). Here, he’s never without shrugged shoulders or a nonchalant “OK” to underscore the absurdity going on around him. But that unique style is what makes Davidson one of SNL’s most delightful, dependable laughs. Plus, we can’t forget about his musical chops. Remember his country Squid Game song?

During his Late Night appearance, Davidson also spoke about the realities of SNL behind-the-scenes during a week when a major celeb, like Nov. 13’s Taylor Swift, is set to perform. “All of a sudden, all my cousins are just ... nobody is leaving me alone about it,” he said. “I just tell everybody that, like, they don’t give me tickets because I cause problems. And what’s sad is, nobody ever questions it.”