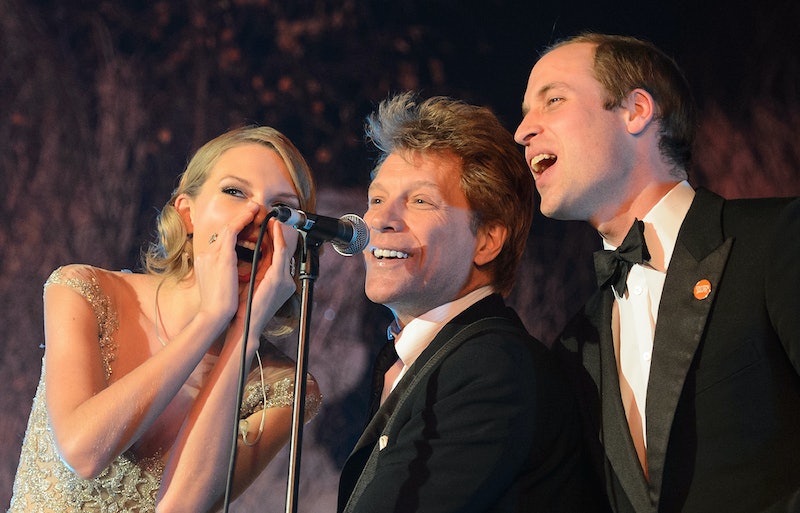 To this day, Prince William isn’t sure what came over him when Taylor Swift dragged him onstage at the Centrepoint fundraising gala in 2013. On the Dec. 6 episode of Apple Fitness+’s Time to Walk series, the Duke of Cambridge recalled attending the charity event and belting out the chorus of “Livin’ On A Prayer” alongside Swift and Bon Jovi. But now that eight years have now gone by, he still cringes just thinking about it.

“When I sat down to watch Jon Bon Jovi do his performance, I thought, ‘That’s it. My job is done. I’ll get a dinner in a minute, and I might be able to have a chat to some people, and, you know, I’m off-duty a little bit now,’” William recalled. “Little did I think what was going to happen next.” It was at that moment that Swift somehow convinced him to sing live in front of the crowd.

“She puts her hand on my arm, looks me in the eye and says, ‘Come on, William. Let’s go and sing,’” he said, explaining that he still can’t quite figure out what possessed him to join the two pop icons on stage that day. “Honestly, even now I’m cringing at what happened next, and I don’t understand why I gave in.” But the “All Too Well” singer seems to have that effect on people.

“Frankly, if Taylor Swift looks you in the eye, touches your arm and says, ‘Come with me…’ I got up like a puppy and went, ‘Yeah, OK, that seems like a great idea. I’ll follow you,’” he added. “I walked up on stage in a trance and then sort of halfway through Jon Bon Jovi’s “Livin’ On A Prayer” song, I wake up.” It was at that moment that William realized he didn’t know the lyrics well enough to belt them out in front of a live audience.

“I’m thinking to myself, ‘Am I standing on the stage singing ‘Livin’ On A Prayer’ when I don’t even know the words?” he continued. “But the Centrepoint young guys and girls were there, all loving it and cheering away. So I thought, ‘Well, if they’re enjoying it, then the night is for them. So sod it. I can’t be the doofus who’s going to ruin it for everyone.” He tried his best to remember the lyrics and gave it his best shot.

“Beneath my black tie, there was a lot of sweating going on,” William confessed, adding that singing in front of people is an entirely different beast than delivering a prepared speech. “When I do speeches and things like that, I’ve done so many now, they’re not a problem,” he said. “But I’ve not done singing.” Sometimes, though, William thinks “you’ve just got to roll with it.”

“I think we’ve gotten to the stage in this life where we do micromanage ourselves,” he said, explaining that people tend to overthink how they appear on social media and what other people might think. “There’s so many pressures, but I think making a fool of yourself is okay,” he added. “It’s okay to not take yourself too seriously and have those moments where you let go and you just go, ‘Do you know what? I’m okay with this.’”