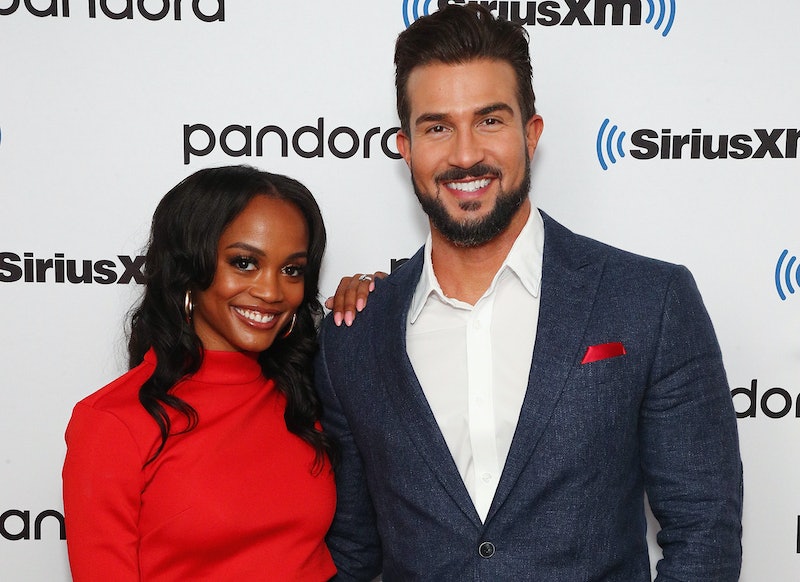 Though the Bachelor franchise doesn't have the smoothest track record when it comes to creating long-term relationships, Rachel Lindsay and Bryan Abasolo are one of the rare success stories. After meeting and falling in love on Rachel's season of The Bachelorette, they got married last August at a ceremony held at Mexico's Royalton Suites Cancun. (Naturally, there were plenty of Bachelor alums in attendance.)

Since then, the couple have returned to their home in Miami — where they relocated after temporarily living in Rachel's hometown of Dallas, Texas — and have both been keeping busy with their careers. Along with co-hosting Game Night on ESPN Radio and MTV's Ghosted, Rachel is a special correspondent for Extra. She also continues to stay in the Bachelor/ette mix with her Bachelor Happy Hour podcast, which she hosts alongside fellow former Bachelorette Ali Fedotowsky-Manno. Bryan, meanwhile, still works as a chiropractor, and he's also a fitness coach under the name Dr. Abs. Like his wife, he has a podcast on the side: Dr. Abs Healthcast.

If you haven't been keeping up with the couple's day-to-day lives, however, you might be in need of a few more updates. Here's what they've been doing since tying the knot.

Two years after their engagement aired on national television, Rachel and Bryan got married on Aug. 24, 2019, in Cancun, Mexico. Instead of a big TV wedding, they exchanged vows in front of their close family and friends. Among the guests were Kristina Schulman, Astrid Loch, and Bibiana Julian, according to People.

After saying "I do," the pair flew to Greece and spent time in Santorini and Mykonos for their honeymoon.

Just one month after their wedding, Rachel and Bryan were already talking about starting a family. "We hope [to have kids] sooner rather than later," Rachel told Us Weekly. "We're not preventing it, but if we're planning, in the next year."

November 2019: Appearing On 'The Doctors'

In November, Rachel and Bryan appeared on The Doctors, where they talked about the strict pre-wedding workout Bryan created for them. They were also featured on the In Love podcast hosted by actors Michael Rosenbaum and Chris Sullivan.

As Rachel told E! News, she and Bryan spent their first two Christmases together in Miami with Bryan's family, so they decided to have a "low-key" holiday with hers in Dallas for 2019. Bryan wrote on Instagram that it was the first time he'd spent Christmas away from his family, but that he was excited to celebrate with the Lindsays.

January 2020: Ringing In The New Year In Miami

After the holidays, the pair returned to Miami just in time to ring in 2020.

What better way to promote your new podcast than by having your podcast pro of a wife stop by for the inaugural episode?

Rachel and Bryan spent their first Valentine's Day as a married couple at home in Miami. "I never really got Valentine's Day until I started spending it with you," Rachel wrote on Instagram alongside a photo from their wedding.

Rachel was the oldest Bachelorette in the history of the franchise, but she's still six years younger than her husband, who turned the big 4-0 on Feb. 15.

Mexico will always hold a special place in Rachel and Bryan's hearts. Earlier this year, they returned to the country for a couples vacation with friends in Playa del Carmen, near Cancun where they got married.

May 2020: Appearing On The New Bachelor Spinoff

Having been through the process of finding love on reality TV, Rachel and Bryan served as guest judges on ABC’s latest Bachelor spinoff series, The Bachelor Presents: Listen To Your Heart.

Amid the Black Lives Matter protests in June, Rachel revealed that she and Bryan have had some “tough discussions” when it comes to race and how they plan to raise their future children as an interracial couple. Both Bachelor alums are vocal members of the Black Lives Matter movement and participated in protests in the wake of George Floyd’s death. "It was important for me that we did it together, because we are one unit. We're married,” Rachel told Entertainment Tonight. "It was also marching for our future, our future child, who will be Black. I don't know if they'll be a male or female, but they may face some of these injustices that we're experiencing right now. So, we're marching for our future family, and that's what was representative of what we went out there and did that day.”

Yes, Bryan is from Miami, but that's not the only reason Rachel became an official Florida resident: it also allows her to vote in a crucial swing state. “Today, I became a Florida resident. Why...for the sole purpose of voting,” she captioned a recent Instagram post. “I will be posting weekly about the ways to register to vote, tools for voting, voting early and why it is important. Tag a friend and spread the word!!!”

The couple also celebrated their one-year wedding anniversary in August. "One year + FOREVER...I love you and I am beyond thankful for you," Rachel wrote to Bryan on Instagram.

This article was originally published on March 2, 2020