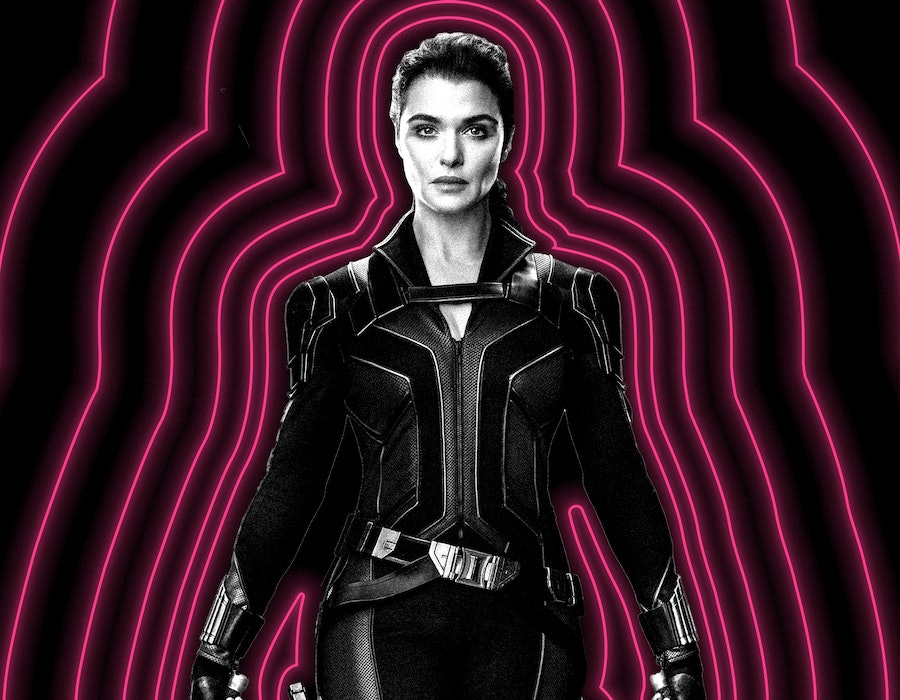 You heard me. If you’ve seen Marvel’s Black Widow, then you know parts of the film are a little out there: the moody “Smells Like Teen Spirit” cover, Florence Pugh’s stacked ponytails, the red dust that frees women from mind control (is that a Matrix “red pill” reference?). But all pale in comparison to the deranged story of Melina’s pigs. (Spoilers ahead).

Melina, played by actual god Rachel Weisz, is a Russian spy and scientist. She developed technology that is currently being used by Dreykov, a villain who’s turning girls around the world into soldiers and placing them under “chemical subjugation,” aka mind control. Now, Melina lives on a farm raising pigs that she, too, has placed under mind control.

That’s where things took a turn for me personally. Melina has this murdered out iPad that she uses to control her pigs. At first, she’s soft with them, pitter-pattering on her tablet, navigating a pig through a maze then praising him, saying, “very good, darling.” But then she demonstrates the power of her technology in front of Natasha (Scarlett Johansson), Yelena (Pugh), and Alexei (David Harbour) by commanding one pig to stop breathing. They wait anxiously for Melina to cease controlling the pig before it suffocates and dies, which she does with just 11 seconds to spare.

The moment Rachel Weisz uttered the words, “The world functions on a higher level when it’s controlled,” was also the moment I realized: I am Rachel Weisz’s pig.

It was harrowing to watch, but the moment Weisz uttered the words, “The world functions on a higher level when it’s controlled,” was also the moment I realized: I am Rachel Weisz’s pig. Yeah, the technology is inherently evil and the plot of the movie is a big metaphor for the evil of men controlling women’s bodies. But if you can remove the fictionalized elements of the story — which I can, easily — then you might be able to see that being controlled by Weisz and her little iPad sounds … like a fantasy?

For example, I believe I am Weisz’s pig. I am filthy, revolting, reeking swine, and she is my mother. I am a mud-covered, feral, honking beast, and she is the sun that keeps me alive. The similarities between me and that pig are breathtaking: I, too, follow where Weisz leads, turn where she says to turn, beg her to feed me, and would gladly give up free will to be her foul pawn.

While watching the pig scene in Black Widow, I sat and wondered like Carrie at her laptop, “What else does that iPad do?” If my entire body was controlled by Weisz, that would … rock?! I would frolic through the mud on all fours, oinking ostentatiously for hours on end if that’s what the job called for. She can stop my breathing — I trust her to return it. And if she doesn’t, that’s simply none of my business. I want to sit around all day and watch Weisz bleep-bloop away on her little iPad and make me suffer, in a sex way.

I want to sit around all day and watch Rachel Weisz bleep-bloop away on her little iPad and make me suffer, in a sex way.

For years now, Weisz has been the collective dom to the Sapphic community, and we, her sub. It’s as if director Cate Shortland saw the filth being spewed on lesbian Twitter, the pleas for Weisz to murder us, and was like, “OK, let’s really give it to these dykes. Let’s let Weisz control a pig’s breath.” I mean, it was a choice, and a choice I feel seen by. Marvel can keep hawking empty promises about explicit queer representation in their movies and giving us nothing if we can get a bunch more shit about Weisz domming. That sounds hot as hell.

But until then, I’ll just beg for scraps like the nasty little piggy that I am.

More like this
Kukulkan From 'Wakanda Forever' Has A Surprising Connection To Marvel History
By Grace Wehniainen
Twitter Is Overjoyed By Angela Bassett’s Record-Making Oscar Nomination
By Maxine Harrison
New Details About Jeremy Renner's Snowplow Accident Reveal The Actor's Intentions
By Sam Ramsden
Rupert Grint Just Shared A *Major* Update About Ron Weasley’s Future
By El Hunt
Get Even More From Bustle — Sign Up For The Newsletter
From hair trends to relationship advice, our daily newsletter has everything you need to sound like a person who’s on TikTok, even if you aren’t.