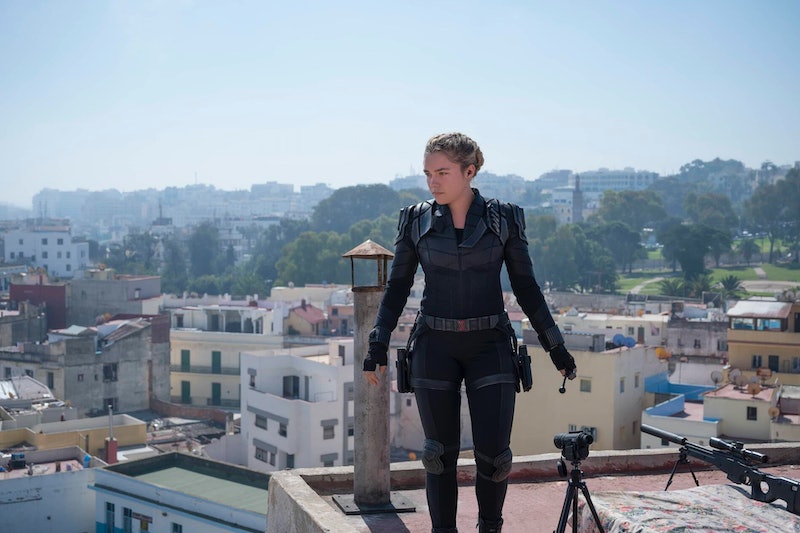 The wait is finally over. After 2020 went down as the first year without an MCU film since 2009, Black Widow — originally slated for release in May 2020 — is arriving in theaters and on Disney+ Premier Access on July 9, 2021. The film marks the first solo on-screen adventure for Scarlett Johansson’s spy-turned-Avenger, but it’s hardly a one-woman show: the movie introduces several new characters, with none more intriguing than Florence Pugh’s Yelena.

The movie is a prequel of sorts, set in the window of time between 2016’s Captain America: Civil War and 2018’s Avengers: Infinity War. During that period, Natasha Romanoff (aka Black Widow) was on the lam, hiding for crimes committed during Civil War. She ended up running into a conspiracy tied to her pre-Avengers days, when she worked as a KGB assassin with “red in her ledger.” Setting things right requires her to seek out some figures from her past, with the most significant being Yelena.

Who Is Yelena Belova In Black Widow?

In the movie, Pugh’s Yelena Belova acts as a younger sister of sorts to Natasha. The two of them were raised together in the Red Room — a top-secret Russian training facility that grooms women into assassins known as Black Widows — and, as such, they have a very similar set of skills. During an on-set interview with Bustle, Pugh described Yelena’s personality as “deeply annoying” but “ready to fight.” She also spoke to the trauma that Natasha and Yelena share: “I think that’s one of the heartbreaks about this film is that it’s eventually about women that have been abused — whether it’s about a system, or physical abuse, they’ve all been, in some way, trapped. I think this film is the realization of the life that was taken from them.”

Like Black Widow, Yelena does not possess any superpowers. What she does have is expert training in espionage, marksmanship, and various types of combat, all of which makes her just as much of a lethal weapon as her older “sister.” In the film, she and Natasha will need all of their skills if they hope to free the remaining Black Widows in the Red Room from the control of the nefarious Taskmaster, the film’s main villain.

Who Is Yelena In The Comics?

Like most Marvel characters who has made the leap from page to screen, Yelena is quite a bit different in the comics than in the MCU. Like Pugh’s character, the Yelena of the comics was trained in the Red Room to be a Black Widow assassin — but that’s pretty much where the similarities end. In the comics, Yelena was not raised alongside Natasha, and their relationship was definitely not sisterly: Yelena got her start as a new Black Widow who was out to show up the original. This never really worked out for her, as Natasha routinely got the best of her while also trying to teach her a few lessons along the way. More of a morally gray character than Natasha, Yelena has at various times in the comics been aligned with S.H.I.E.L.D., the supervillain organization AIM, and the black ops superhero team Vanguard. She has fought the Avengers on numerous occasions, and in two of her most outlandish storylines, she had her face swapped with Natasha’s and was turned into a super-powered being known as the Super-Adaptoid. She also was killed during a fight with the Avenger Mockingbird, only to be resurrected via a number of clones. Naturally, the film version will keep things a bit simpler.

But Yelena’s onscreen story won’t end with Black Widow. Florence Pugh is already confirmed to reprise her role as the character in the Disney+ series Hawkeye later this year, according to Variety, and given that we already know what the future holds for Natasha, it’s entirely possible that Yelena could act as the MCU’s new Black Widow moving forward. Indeed, Black Widow director Cate Shortland has hinted at just that, telling Empire that her film “hands the baton” from Natasha to Yelena.

More like this
The First 'Percy Jackson & The Olympians' Teaser Comes With An Ominous Warning
By Grace Wehniainen
Zendaya Shares Intimate Photo With Tom Holland To Wish Him A Happy Birthday
By Bustle Editors
The New 'National Treasure' Series Trailer Teases The Return Of A Popular Character
By Grace Wehniainen
Paul Mescal, Man Of Mystery
By Samantha Leach and Heather Hazzan
Get Even More From Bustle — Sign Up For The Newsletter