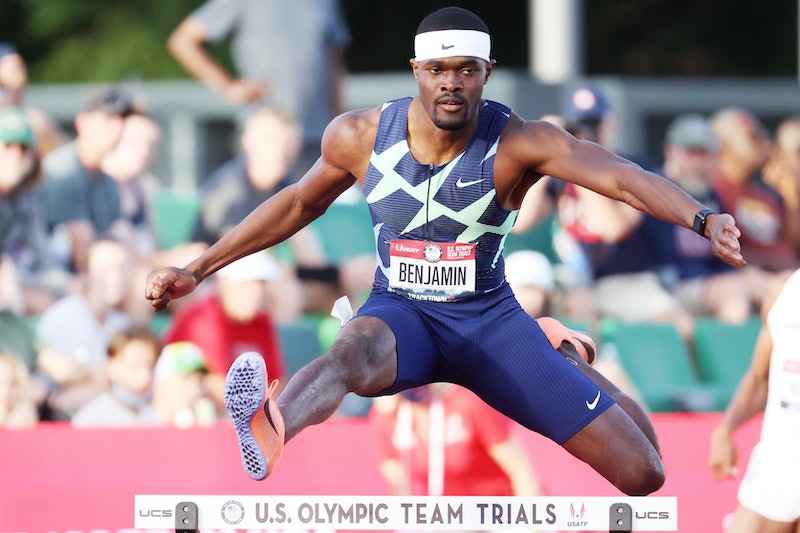 This year marks Rai Benjamin’s first time at the Olympics, but the track star is already becoming a favorite on social media for his speed and sure-footed confidence. At just 24 years old, Benjamin has made several strides in the field — from contributing to a men’s 400-meter relay world record at the University of Southern California to more recently becoming the second-best 400-meter hurdler in history at the Olympic Team Trials, per Team USA’s official website. But Benjamin seems to be saving the best for later — for Aug. 1, that is, when he’s first scheduled to compete in the 400-meter hurdles in the Tokyo Olympics. “It’s like if I would have broken the world record now,” he told Team USA, “what would I have done in Tokyo?”

It’s that brand of self-assuredness that has made Benjamin such an exciting competitor to watch (and root for) at this year’s games. As you wait to see Benjamin glide over upcoming hurdles at the Summer Olympics, here is everything you should know about the fast favorite of the Olympics’ track and field scene.

He Has A Unique Race Prep Method

As Benjamin shared in an interview with USC when he was still a student, he’s always loved sprinting — but hurdles came by happy accident when his track coach needed extra points for a sectional, and he volunteered to help. He also detailed a new race prep method he discovered. “When we'd get to the hotel the night before the meet, my roommate and I would watch Friends and Family Guy on TBS, and we've done that ever since,” he said.

When it came to preparing for his first time at the Olympics, Benjamin had to get creative in light of COVID restrictions on the facilities he’d typically train at. As he explained in a recent interview with Men’s Health, he would run with his training partners throughout Los Angeles streets, alleyways, and the beach. “It was actually crazy what we were doing,” he said. “But it was fun at the same time ... People would come out and watch us.”

Rai is not the only Benjamin with a passion for sports — his father, Winston Benjamin, was an Antiguan cricketer and still coaches athletes on the island. “I never know why he chose track and not cricket,” Winston recently told The Times of India. “All I knew [was] I would back him [in] whatever he chose ... I am proud and happy that he is going to the Olympics.”

Benjamin Has A Passion For Competition

Though a love of competition might seem like a pre-requisite for Olympic track and field, Benjamin really loves it. As he explained to USC, “I've always liked running fast and competing and beating other people.” Sometimes “other people” includes himself, of course, as Benjamin achieves personal best after best.

The accomplished athlete (who also loves Fortnite, per his Team USA bio) already has a gold and silver World Championship medal under his belt. Now, Benjamin will be able to try for a medal on the Olympic stage, with the 400-meter hurdles kicking off on Aug. 1.

More like this
'Breaking Bad' Duo Walt & Jesse Are Back — In This Super Bowl Commercial
By Jake Viswanath
Rihanna Tells Us To Shush About New Music In Super Bowl Halftime Show Trailer
By Jake Viswanath
Hannah Ann Got Engaged 3 Years After 'The Bachelor' & The Proposal Was Dreamy
By Grace Wehniainen
Here’s Everything Coming To & Leaving Netflix In February
By Jake Viswanath
Get Even More From Bustle — Sign Up For The Newsletter
From hair trends to relationship advice, our daily newsletter has everything you need to sound like a person who’s on TikTok, even if you aren’t.