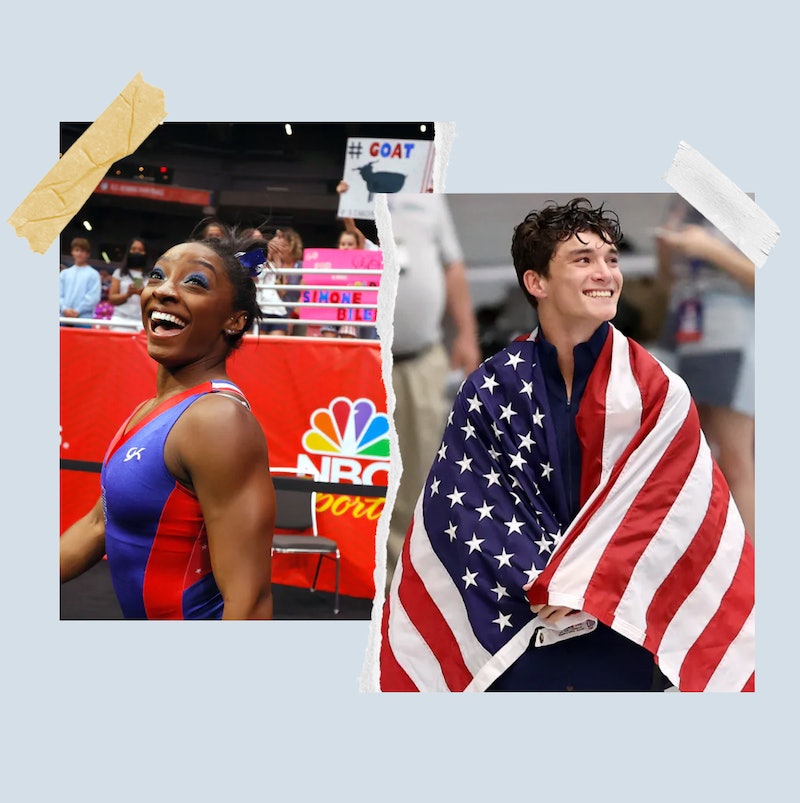 The COVID-19 pandemic may have wreaked havoc on the world in 2020, but there’s at least one major sign that things are slowly getting back to normal: The Olympics are a-go ... just a year later than planned. The long-delayed Summer Olympics will finally take place in Tokyo, Japan, from July 23 to Aug. 8, 2021. Over the course of these two weeks, fans can watch the 2021 Olympics and their favorite athletes from around the world as they compete for the gold, whether it be in gymnastics, diving, soccer, tennis, or yes, even something called handball.

If you’re one of those people who must see gymnastics stalwart Simone Biles vie for her fifth gold medal, Team USA’s only karate kata competitor Sakura Kokumai make her Olympic debut, or Laurel Hubbard make history as the first trans person to compete in any Olympics, you’ll be able to catch all of the Tokyo Olympics action on TV or online.

Your local NBC station will air major Olympic events during its nightly primetime coverage, and all the games will be streaming online on NBC Sports and the NBC Olympics website. Many sports will also be airing on CNBC and the USA Network. Times for every sport’s qualifying tournaments and finals rounds have been posted on NBC’s website. If you plan to watch live in real time, keep in mind that Tokyo is 13 hours ahead of the Eastern time zone, and 16 hours ahead for West Coast viewers. Therefore, many major evening tournaments will air in the early morning in the U.S., and vice versa for morning events.

Instead of showing every sport live, Peacock will be streaming some major events live every morning, including women’s and men’s gymnastics, Team USA men’s baskeball, and track and field competitions. On their Olympics hub, the streaming service will broadcast a highlights show from 11:00 a.m. to 7:00 p.m. Eastern time, showing the best moments from the previous day’s events. In the evening, they will host a live studio show showcasing Olympic highlights.

When Is My Favorite Sport Taking Place?

Each sport has its own few-day period within the two-week-long Olympics that they’ll be competing on, meaning not every sport will overlap. For example, gymnastics will take place from July 23 to Aug. 3, swimming happens from July 24 to Aug. 4, artistic swimming (yes, there’s a difference) runs from Aug. 2 to 7, and trampoline will only compete on July 30 and 31.

NBC has posted streaming schedules for every Olympic sport on their website, indicating the days each sport will take place, the times of every round (in Eastern Time), and where to watch, in case you wanted to prepare for your viewing parties. In addition, they shared rundowns of all the sporting events taking place on each day, from July 23 to August 8, and how to stream them online. However, this will likely differ from the network’s TV broadcast schedule, which has not been specified and is usually reserved for marquee Team USA events and sports.

When Are The Olympic Ceremonies?

The Olympics’ grand ceremonies are worth tuning in for — even if you aren’t that knowledgable in sports. They’re basically the closest thing the Olympics have to the Super Bowl Halftime Show. NBC will broadcast the Opening Ceremony live on July 23 at 7:00 a.m. ET and 4:00 a.m. PT, while the Closing Ceremony will air on Aug. 8 at the same times. It may be early, but sometimes you have to make sacrifices to witness true spectacle in its most inspiring form. However, if you refuse to not sleep in, NBC will be re-airing the Ceremony during its usual primetime broadcast at 7:30 p.m. ET and 4:30 p.m. PT.

Read Next: How To Watch The Olympics Opening Ceremony

More like this
Here’s Everything Coming To & Leaving Netflix In December
By Jake Viswanath
Julia Haart’s Husband Fired Her As CEO Of Elite World Group
By Brad Witter
Watch The Gripping First Trailer For The 'Harry & Meghan' Netflix Doc
By Jake Viswanath
The First Trailer For 'That '90s Show' Includes So Many Nods To The Original Series
By Jack Irvin, Alyssa Lapid and Grace Wehniainen
Get Even More From Bustle — Sign Up For The Newsletter