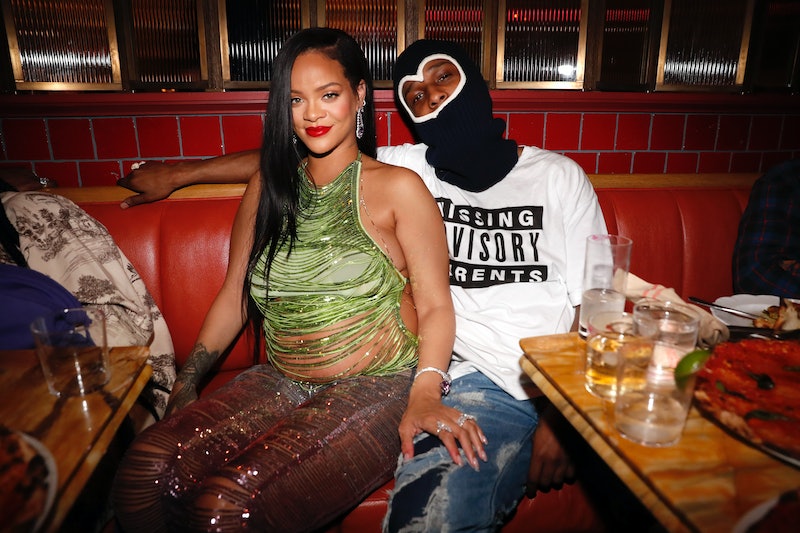 Rihanna and A$AP Rocky keep proving that they’re the coolest parents. From the couple’s pregnancy reveal last January to Rihanna’s “rebellious” maternity style, the expecting couple has been doing everything baby-related in style. Their Hollywood baby shower, which reportedly happened on April 22 and had a rave theme, was no different.

The “over-the-top” shower was also intimate, according to HipHopHollywood. Guests, which included friends and family who flew in from Barbados, followed the theme and donned their “brightest” neon-colored ’fits. While the bash was supposedly super private with attendees barred from filming and photographing the event, a leaked party favor — a cheeky T-shirt — is making its rounds on the Internet. On the front, the white shirt has photos of Rihanna and Rocky as children with “Rih and Rocky Rave Shower” written on it. It also had heart and sparkle shapes in pink, blue, and yellow (cue Rih’s 2012 No.1 hit “Diamonds”). On the back, the shirt says, “I Went To Rih & Rocky’s Rave Shower And All I Got Was This Amazing Shirt.”

The 34-year-old Fenty Beauty founder has been known to throw amazing parties for her brands with a ton of party favors. Her makeup brand’s ULTA launch party, for example, featured different games and stations just for giveaways. So it’s likely that there were even more dope freebies given out by the end of the shower.

The celebration comes after the couple faced a series of challenges. On April 15, rumors circulated that the rapper allegedly cheated on the “Diamonds” singer with Fenty Shoe designer Amina Muaddi. Muaddi, on her part, crushed the rumors via her Instagram Stories, calling it “fake gossip” and “an unfounded lie” in a statement. Just five days later, on April 20, Rocky was arrested in connection to a shooting that happened in November of 2021. Facing a charge of assault with a deadly weapon, the 33-year-old was arrested right after deplaning a private aircraft from Barbados but was also released later that day after posting a $550,000 bail.

The party’s timing seems to coincide with Rihanna’s suspected due date. While there’s no confirmation, shrewd fans analyzed a bracelet Rocky gifted the soon-to-be-mother, pointing out that the emerald in it could symbolize May’s birthstone. If that’s true, their baby should be coming soon.

More like this
Kourtney Kardashian & Travis Barker Are Married – Officially
By Sophie McEvoy
Rihanna Wore Crochet Bra Tops In A$AP Rocky's New Music Video
By Dominique Norman and Kelsey Stiegman
Cardi B Explains To David Letterman Why She Uses Her Star Power For Politics
By Jake Viswanath
The Very Best Quotes From Dr. Taylor Swift’s NYU Graduation Speech
By Grace Wehniainen
Get Even More From Bustle — Sign Up For The Newsletter