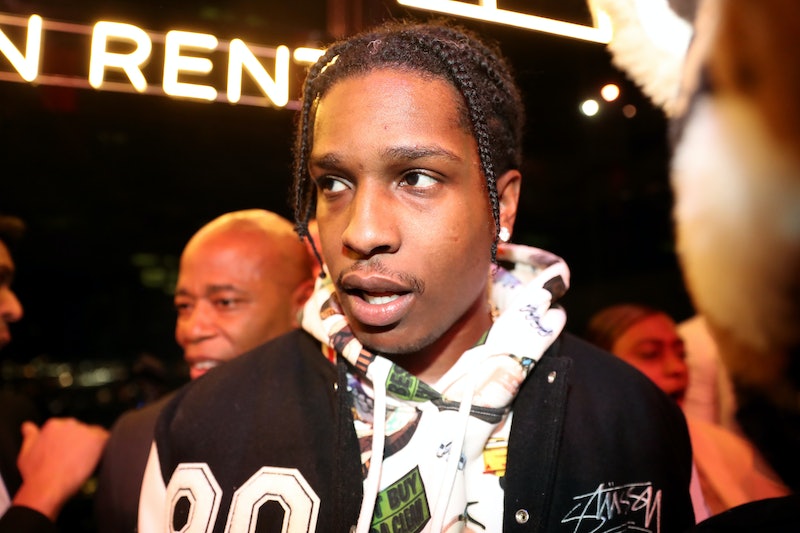 A$AP Rocky was arrested on April 20 in connection to a shooting that occurred in November 2021. The 33-year-old rapper, whose real name is Rakim Meyers, was detained at Los Angeles International Airport after departing a private plane from Barbados, the home country of his girlfriend Rihanna, with whom he’s expecting their first child. Rocky’s attorney Alan Jackson confirmed the arrest to NBC News but gave no comment on the matter. He posted his bail, which was set at $550,000, and was released later that day.

According to police reports seen by the outlet, Rocky had been under investigation for a shooting that took place on Nov. 6 in the Hollywood area. The victim, who has not been publicly identified, told police that Rocky approached him with a handgun, along with two other unknown men, and shot at him “three or four times.”

Rocky has yet to comment on the arrest or alleged shooting. But on April 23, he was spotted going to dinner with Rihanna and a group of friends at Giorgio Baldi in Santa Monica, marking the couple’s first public sighting since his release, and they didn’t seem too stressed about the legal drama. “Rihanna looked great. She sat next to A$AP and they were affectionate,” a source told PEOPLE. “They dined for a couple of hours. The focus was very much on Rihanna and the baby.”

The Los Angeles Police Department confirmed Rocky’s arrest and gave a press release about the shooting, which stemmed from an argument and had not been reported prior to the April 20 arrest: “The argument escalated and resulted in the suspect firing a handgun at the victim,” the statement read. “The victim sustained a minor injury from the incident and later sought medical treatment. Following the shooting, the suspect and two additional males fled the area on foot. Detectives worked diligently to investigate and [corroborate] the reporting information, which helped identify the suspect(s) involved.”

The LAPD stated that Rocky was being faced with a charge of assault with a deadly weapon. TMZ reported that officers issued a search warrant on his home, which has now been completed, and he was immediately taken to LAPD headquarters for questioning.

This is not the artist’s first bout of legal trouble. In 2019, Rocky was arrested in Sweden after a fight on the street between his team and two men. He served one month in Swedish prison before being found guilty of assault, causing the likes of then-President Donald Trump to call for his release. He was handed a suspended sentence and forced to pay a fine to the victim, but his lawyer maintained that he acted in self-defense after being followed and harassed by the victim.

This article was originally published on April 20, 2022