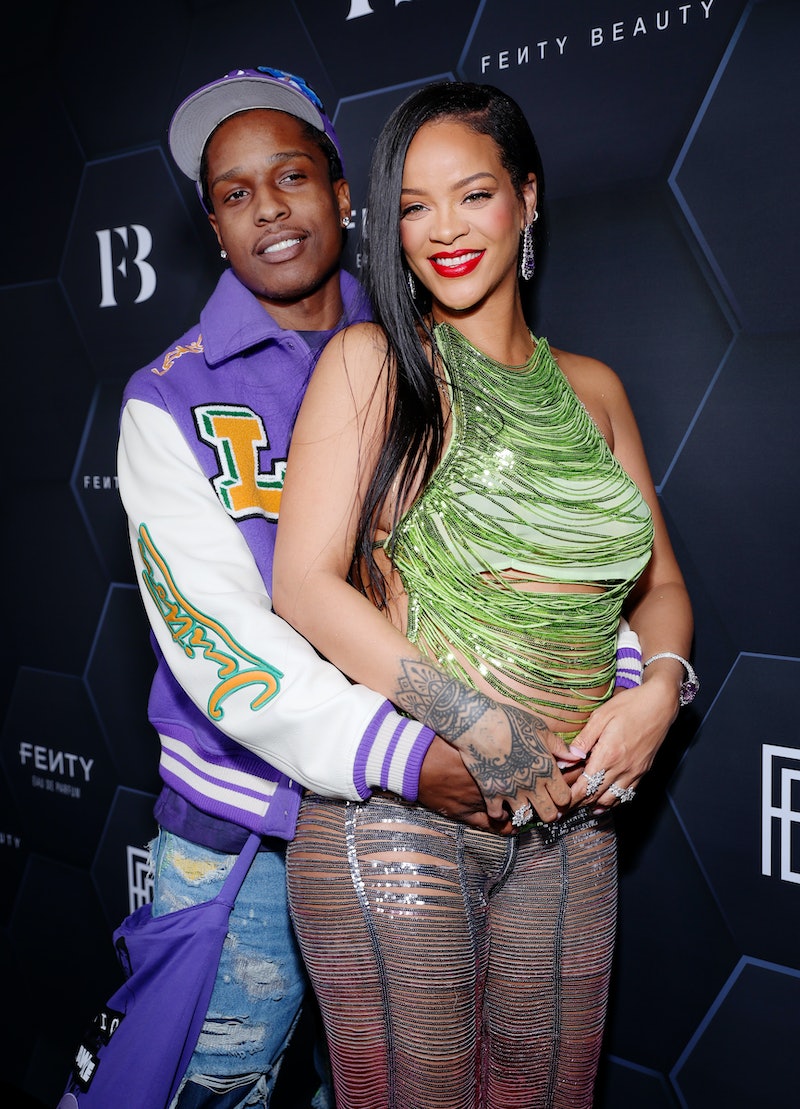 It appears Rihanna and A$AP Rocky might be preparing to head down the aisle sometime soon. The Fenty Beauty entrepreneur and mother-to-be was seen sporting a large diamond ring on that finger in Los Angeles on March 21, leading fans to think Rihanna may have gotten engaged to her A-list rapper boyfriend. Photos of the “Diamonds” singer wearing the speculated engagement ring with a graphic t-shirt, jeans, and a trucker hat can be seen on HollywoodLife.

Neither Rihanna nor A$AP Rocky have confirmed the rumored engagement, which, if it just happened, arrives less than two months after the pair announced they’re expecting their first child.

According to a TMZ report, the Savage X Fenty CEO has been seen wearing the same diamond ring multiple times over the past year, but this is the first time she’s donned it on her left ring finger. She was initially spotted with the rock on her index finger during a reported music video shoot with Rocky in July 2021, and she wore it on her middle finger for a ceremony during which she was named the 11th National Hero of her native Barbados in November 2021.

The pair first met when Rocky featured on a remix of Rihanna’s “Cockiness (Love It)” in 2012, and the following year, the rapper opened for her Diamonds World Tour and recruited her to appear in his “Fashion Killa” music video. Dating rumors began in early 2020, but an official confirmation of their relationship wouldn’t come for more than another calendar year.

Speaking to GQ for a cover story in May 2021, Rocky revealed he’d started dating Rihanna and called her “the love of my life” and “my lady.” Elsewhere in the interview, he said they’d bonded over a cross-country road trip during 2020 and claimed life is “so much better” in a relationship, hinting at plans to someday marry the singer. “So much better when you got the One. She amounts to probably, like, a million of the other ones,” detailed Rocky. “I think when you know, you know. She’s the One.”

In recent weeks, Rihanna’s made headlines for her unconventional and “rebellious” maternity style, as she’s opted to continue turning high-fashion, skin-baring looks instead of wearing the stretchy clothes that often accompany pregnancy. “It’s been me personally saying, I’m not going to buy maternity clothes. I’m not gonna buy maternity pants, jeans, dresses, or [do] whatever society told me to do before,” she told Bustle earlier this month.

“The one thing I’ve learned the most during pregnancy is no one can truly prepare you,” Rihanna said in the interview. “No matter how many stories you hear, your journey is so unique to you and you could never be prepared enough. You just have to embrace the journey.”

More like this
What Is Ariana Grande's Net Worth? When It Comes To Money, She Has No “Problem”
By Hugh McIntyre
Justin & Hailey Bieber's Bond Is "Unbreakable" Amid His Ramsay Hunt Diagnosis
By Bustle Editors
Britney Has Been Granted A Restraining Order Against Her Ex-Husband
By Bustle Staff
Perrie Edwards & Alex Oxlade-Chamberlain Have The Sweetest Engagement Pictures
By Lara Williams and Frances Stewart
Get Even More From Bustle — Sign Up For The Newsletter