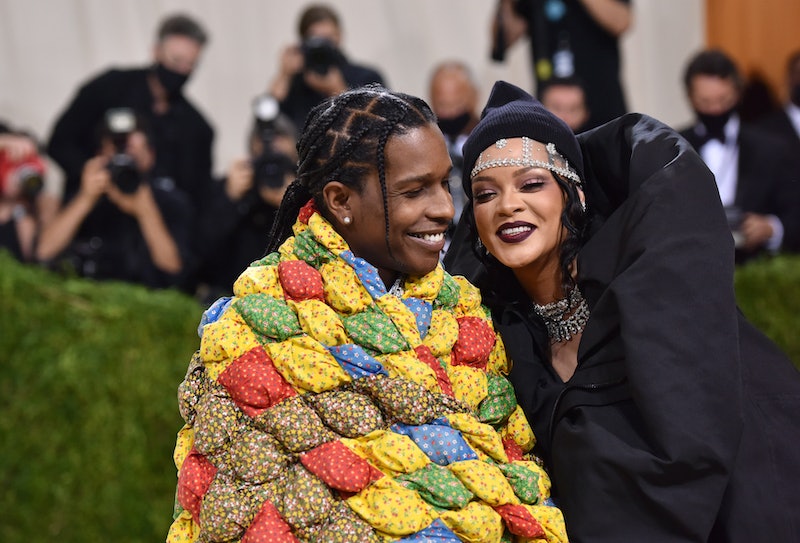 First comes love, then comes a pregnancy, then comes ... marriage vows on grills? Rihanna stars in her boyfriend A$AP Rocky’s new video for “D.M.B.,” an acronym for “Dat’s My Bitch,” where they get (fake) married using grills that do all the talking. Do grills speak louder than words? Fans are now wondering whether they secretly got engaged or even married ahead of their baby’s birth.

On his new single, Rocky pays tribute to his megastar girlfriend, rapping about the Fenty Beauty owner’s billionaire status with lines like, “She got bank accounts too, with big amounts, sh*t you couldn’t count,” and even throwing potential shade at her ex-boyfriend Chris Brown, who was arrested for domestic violence in 2009 when they were dating. “I don’t beat my b*tch, I need my b*tch, shе clean my crib, she feed my friends,” he raps.

In the video, Rihanna is seen rolling blunts with Rocky, hanging out on a fire escape in a neon fur coat, and showing plenty of PDA with her man. Later on, Riri dons a sheer red veil that Rocky uncovers, like a groom does for his bride, before he flashes his grill that reads “Marry Me,” which she responds to by flashing “I Do” on her own grill. The clip concludes with the couple walking down a hallway as rose petals are being thrown, before they go outside to face the world together.

Of course, the music video made some fans speculate that Rihanna and Rocky were actually engaged or married. But given how neither of them have confirmed the news, Riri hasn’t been spotted with any sort of ring, and no legal papers have been discovered as of yet, it’s likely their pretend wedding was done solely for creative purposes.

The “D.M.B.” video was shot in New York City over the summer of 2021, according to PEOPLE, which tracks given how Rihanna’s baby bump is nowhere to be seen. The couple announced that they were expecting their first child in February 2021 by showing off her growing bump while walking around New York’s Harlem neighborhood, where Rocky grew up. The video follows Rocky’s April 20 arrest for his alleged involvement in a Los Angeles shooting in November 2021.

READ NEXT: Rihanna Stole The Met Gala Show As A Marble Statue

Surprisingly, this isn’t Rihanna’s first appearance in an A$AP video. The Anti singer previously made a cameo in his “Fashion Killa” music video in 2013, when they were just friends and collaborators. Before then, he featured on a remix of her 2012 hit “Cockiness (Love It),” which they performed at that year’s MTV Video Music Awards, and opened some U.S. dates of her Diamonds World Tour. The Rihanna & Rocky Cinematic Universe is only expanding.

More like this
Twitter Is Upset About The 'American Idol' Top 3 Results: "Who TF Is Voting?"
By Jake Viswanath
Stormi Just Walked A Red Carpet With Mommy Kylie Jenner & Daddy Travis Scott
By Hugh McIntyre
Lisa Marie Presley Reviewed Baz Luhrmann’s ‘Elvis’ Movie On Twitter
By Grace Wehniainen
Selena Gomez Joked About Her Relationship Status In Her ‘SNL’ Monologue
By Grace Wehniainen
Get Even More From Bustle — Sign Up For The Newsletter