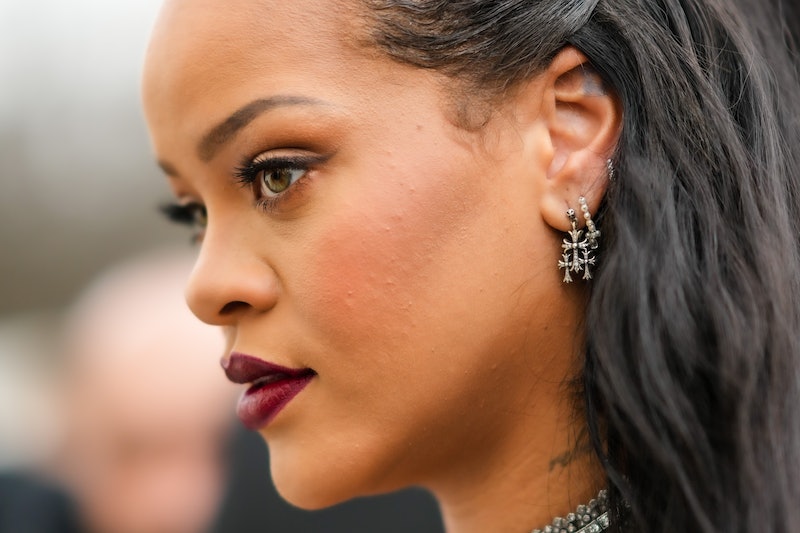 Countless photos from the 2022 Met Gala have already flooded your social media feeds, but one red carpet fixture was notably missing from the action. Style icon Rihanna, a nine-time Met Gala attendee and former event co-host, whose outfits alway steal the show, skipped the May 2 event, likely due to her pregnancy (she could give birth any day now if she already secretly hasn’t).

While we’ll never know how the Fenty Beauty founder would’ve interpreted this year’s “Gilded Glamour” theme in her rebellious maternity style, fans waiting on a Rihanna appearance weren’t completely disappointed. Despite not actually showing up, she still made an iconic cameo at the event. Vogue, which hosts the annual gala and curates the seasonal fashion exhibit, erected a towering marble statue of Rihanna fashioned after her May 2022 cover.

Touched by the surprise, the expecting mother took to Instagram to give Vogue and the Met a shoutout, saying, “shut down the met in marble! what’s more gilded than that? Lol! Thank you @metmuseum and @voguemagazine for this historic tribute! y’all bad for this one!”

Rih last attended the highly exclusive function in September 2021 alongside boyfriend A$AP Rocky where they got cozy on the Met Museum’s steps-turned-red carpet. Months later, on Feb. 2, Rihanna announced that they were expecting a baby via a stylized shoot. The “Diamonds” singer is currently in her third trimester (fans predict her due date is this month) so it’s understandable that they both missed the event.

Vogue further explained the inspiration for the statue on Instagram. Aside from basing it on the cover, where she proudly showed off her baby bump decked in head-to-toe Alaïa, the statue is also apparently a tribute to the Greek goddess Eirene, aka the “Personification of Peace.” According to the caption, it’s “usually the highest-profile marble goddess at the Met Museum’s Greco-Roman galleries.”

While it’s not the first time the Savage x Fenty CEO skipped the event — she was notably missing in 2019 for the Camp-themed gala, — it’s definitely the first time that a tribute of this magnitude was made to any celebrity in the gala’s recent history.

Petition to keep the statue for public viewing, please.

More like this
Is Megan Fox Pregnant? MGK Gave A Shout-Out To Their “Unborn Child” Onstage
By Hugh McIntyre
Doja Cat Needed Tonsil Surgery & Now She Can't Eat Taco Bell's Mexican Pizza
By Jake Viswanath
Britney Spears Thanks Fans After Miscarriage & Explains Why She's Writing A Book
By Jake Viswanath
Joe Alwyn Reacts To Taylor Swift Earning An NYU Doctorate In A Rare Interview
By Jake Viswanath and Nicole Pomarico
Get Even More From Bustle — Sign Up For The Newsletter