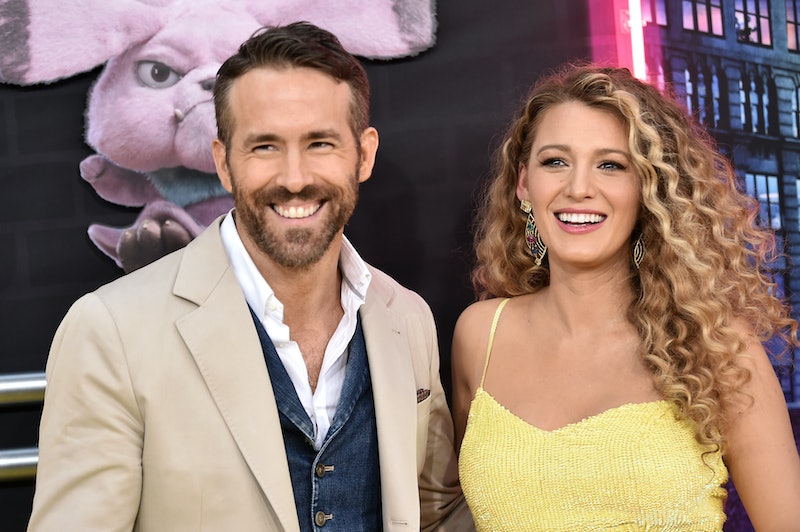 The secret to a happy marriage? Online trolling. On Wednesday, Dec. 16, Ryan Reynolds trolled wife Blake Lively on Instagram with a PSA about for new moms posted by the postpartum-centric brand Frida. The company shared a video on their account all about the various "dicks" that new mothers should avoid in the weeks after giving birth, referring to both the body part and "those other dicks making postpartum life even tougher." They concluded their post by encouraging followers to tag any new moms in their lives.

While Lively isn't exactly a new mom — she welcomed her third daughter, Betty, in September 2019 — her husband tagged her anyway and threw in a cheeky joke about being one of the "dicks" she should avoid. "I'd tag @blakelively but I'm afraid that might not go well for me," Reynolds wrote, making sure that he did, indeed, tag her in the comment. Lively has not yet publicly responded to the Deadpool star, but his comment could be considered payback for the recent joke she made about loving dessert more than she loves her husband.

On Dec. 10, the Gossip Girl alum shared several of her "favorite things in the world" from Vancouver on her Instagram Story: donuts, ice cream, and pie. She followed that up with her "fourth" favorite thing: boxes of dessert from the restaurant Ask For Luigi. "...Who did you think I was gonna say??" she captioned the post before adding a Deadpool emoji in the corner.

Reynolds and Lively — who are also parents to 6-year-old James and 4-year-old Inez — have become well-known for their social media back-and-forth over the years, which has become a signature part of their relationship. "We do it in real life all the time," Lively told HELLO! magazine in 2018 about their witty banter. "It was just an organic thing, and I don't know where or when it happened, but all day long, we are just [teasing] each other because that's my best friend!" Reynolds echoed those sentiments a year later on the Sunday Sitdown with Willie Geist podcast. "We're people that don't take ourselves too seriously. The only people I really love to make fun of is us," he said.

And they truly do love to make fun of each other: Reynolds celebrated Lively's birthday in August 2017 by cropping her out of a photo on Instagram. She responded a few months later by sharing a photo of herself with Reynolds and Ryan Gosling and cropping only her husband out of the photo. They've also shared unflattering photos of each other on Instagram and poked fun at their ever-growing family with jokes about more babies and ineffective birth control.

In January 2020, Lively responded to Reynolds sharing a clip from his film Buried on social media, writing, "I think I just got pregnant," and the Deadpool star reacted with a very over-the-top "out of office" message. "I will be out of the office starting July 22nd through the middle of forever and ever. If you need immediate assistance during my absence, please contact someone. Anyone. Otherwise I will respond to your message as soon as possible upon my unlikely return. Thank you," he wrote in the comments.

All of those jokes are unsurprising; Lively has been very open about the challenges of having three young children. "It's like going from two to 3,000," the actor said during a January 2020 appearance on Good Morning America. "I mean, we have so many children. It's pretty crazy. We're outnumbered, and it's a lot." Fortunately, she has Reynolds right by her side, ready to make her laugh at all times.

More like this
Stanley Tucci & Felicity Blunt’s Relationship Timeline Might Make You A Little Hungry
By Jake Viswanath
Kim Kardashian Reveals Her Response To Kanye’s Fashion Opinions
By Jake Viswanath
Hailey Bieber Just Responded To *That* Viral Met Gala Moment
By Radhika Menon and Sam Ramsden
Dixie D’Amelio & Noah Beck “Love Each Other” Despite Breakup Rumors
By Julia Emmanuele, Jordyn Tilchen and Grace Wehniainen
Get Even More From Bustle — Sign Up For The Newsletter