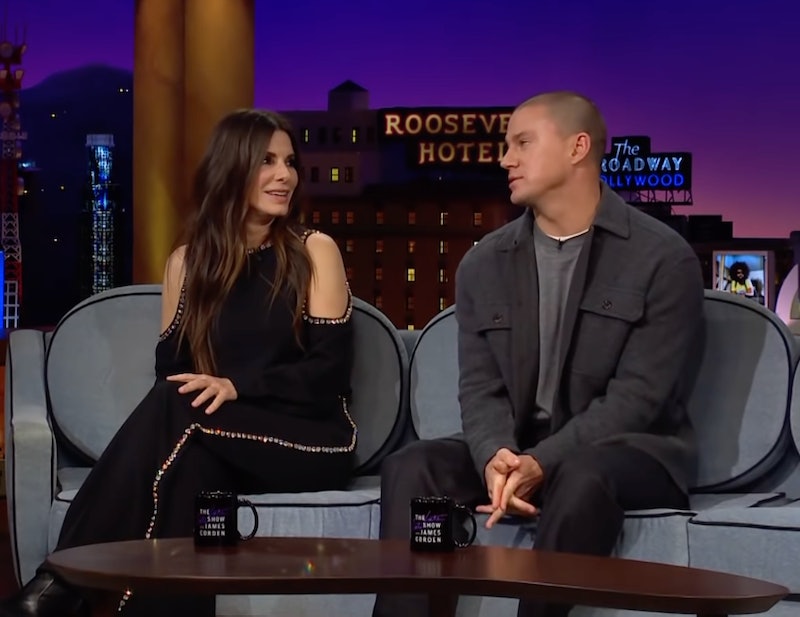 Picture celebrities meeting for the first time, and swanky awards ceremonies and lavish after-parties come to mind. Very much not the case for Channing Tatum and Sandra Bullock. Appearing together on James Corden’s The Late Late Show, the two actors revealed that they were first introduced in the principal’s office after being called into school to separate their bickering children.

“We have two very, very strong-willed little girls that, you know, at that very young age were very much butting heads,” Tatum said. “We'd get calls, and I'd be like, ‘Please let it be Everly,’” Bullock quipped, referring to Tatum’s daughter with his ex-wife, Jenna Dewan.

Though the pair had sighted each other in passing before — Bullock watched Tatum starring in Magic Mike, whilst Tatum was once starstruck by spotting his now co-star at the Academy Awards — it was ultimately the rivalry between their children that brought them together. On one occasion, both parents were called in and met for the first time at school. “They just wanted to know how we can work this out,” Bullock said.

After an altercation between the two kids, the school set a challenge. “The challenge was who can be the nicest to the other one. So they were bringing each other little Dixie [paper] cups of water,” she laughed. “I don't know where they would have learned this competitiveness at all,” Tatum quipped.

The two actors now star opposite each other in The Lost City, which also features Daniel Radcliffe, Brad Pitt, and Da'Vine Joy Randolph. Bullock plays a best-selling romance author, who has become disenchanted with her career, while Tatum portrays the hunky but dim-witted cover model for her novel The Lost City of D. When Bullock’s character Loretta Sage suddenly gets kidnapped, the rescue mission is left to Tatum’s Alan Caprison, and chaos ensues.

Off-camera, meanwhile, Bullock and Tatum admitted to believing that they were separated at birth. “It's a chemical brain thing where you… there is just a level of stupidity that we feel comfortable with,” Bullock said. “It's complicated,” her co-star noted. “If I said something incredibly dumb, then we both sort of locked eyes and were like, ‘I know, right?’ We are both very stupid.”

“We go to the lowest common denominator and we feel right at home there,” Bullock laughed.

More like this
Twitter Can’t Get Over This One Part Of Lily Allen & David Harbour’s House
By El Hunt
Paul Rudd’s Secret To Eternal Youth Is Something You Can Try At Home
By Darshita Goyal
Channing Tatum “Nearly Killed” Salma Hayek During 'Magic Mike' Lap Dance
By Sam Ramsden
Michaela Coel Has Some *Thoughts* About The Nepo Baby Discourse
By Maxine Harrison
Get The Very Best Of Bustle/UK
Sign up for Bustle UK's twice-weekly newsletter, featuring the latest must-watch TV, moving personal stories, and expert advice on the hottest viral buys.