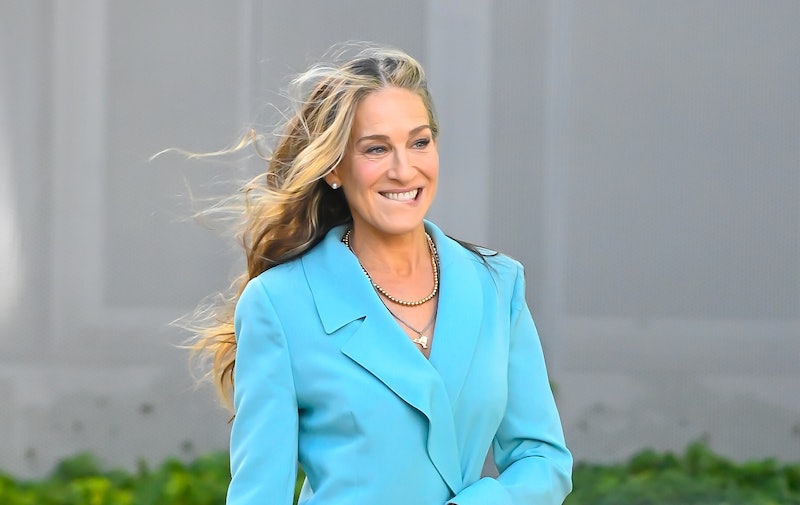 Carrie Bradshaw may still be answering burning relationship questions in HBO Max’s upcoming Sex and the City revival And Just Like That..., but the star who plays her has no time for your ageist criticism. In her new Vogue cover story published on Nov. 7, Sarah Jessica Parker slammed critics who had ageist comments about her appearance in the SATC reboot. “There's so much misogynist chatter in response to us that would never. Happen. About. A. Man,” she said, with the outlet reporting that she clapped in between each word.

Parker compared the comments about her appearance to her friend and Bravo honcho Andy Cohen, noting that people praise his “exquisite” gray hair but bash hers. “Why is it okay for him?” she asked. “Everyone has something to say. ‘She has too many wrinkles, she doesn’t have enough wrinkles.’ It almost feels as if people don’t want us to be perfectly okay with where we are, as if they almost enjoy us being pained by who we are today, whether we choose to age naturally and not look perfect, or whether you do something if that makes you feel better.” She concluded her thoughts by noting she can’t control how she ages. “I know what I look like,” she said. “I have no choice. What am I going to do about it? Stop aging? Disappear?”

Co-star Cynthia Nixon agreed with Parker’s sentiment, calling the show’s embrace of women’s 50-year-old bodies “revolutionary” for TV. “I like that we’re not trying to youthify the show,” she said. “We’re not including, like, a 21-year-old niece. I think it’s revolutionary to do a show about middle-aged women, with their aging lady bodies.” Their co-star Kristin Davis also questioned why some viewers were skeptical about the show’s return, attributing it to ageism. “People are like, ‘Why should they come back?’ and it really bugs me,” she remarked. “For me that is so indicative of our reluctance to sit and watch women’s lives develop over time.”

However, for fans who are ready to see how Carrie and her friends are faring in their 50s, the reboot will deliver. HBO Max announced And Just Like That... in January after months of rumors, confirming that Parker, Nixon, and Davis would reprise their iconic roles of Carrie, Miranda Hobbes, and Charlotte York, respectively. Kim Cattrall is not returning as Samantha Jones — but almost everyone else is. The revival will feature Chris Noth as Mr. Big and the late Willie Garson as Stanford Blatch, marking one of his final onscreen roles. New faces Sarita Choudhury, Nicole Ari Parker, and Karen Pittman will also join the cast.

And Just Like That... will start streaming on HBO Max in December.

More like this
At 14, Pauline Chalamet Fell In Love & Danced ‘The Nutcracker’
By Grace Wehniainen
The 'Love, Lizzo' Harry Styles Scene Is Just 1 Moment That Made Fans Feel Seen
By Brad Witter
Theo James Revealed The Truth About His 'White Lotus' Nude Scene & Fans Can't Cope
By Stephanie Topacio Long
Chrishell Stause Claims The PCAs Stopped Her From Bringing Her Partner G Flip
By Jake Viswanath
Get Even More From Bustle — Sign Up For The Newsletter