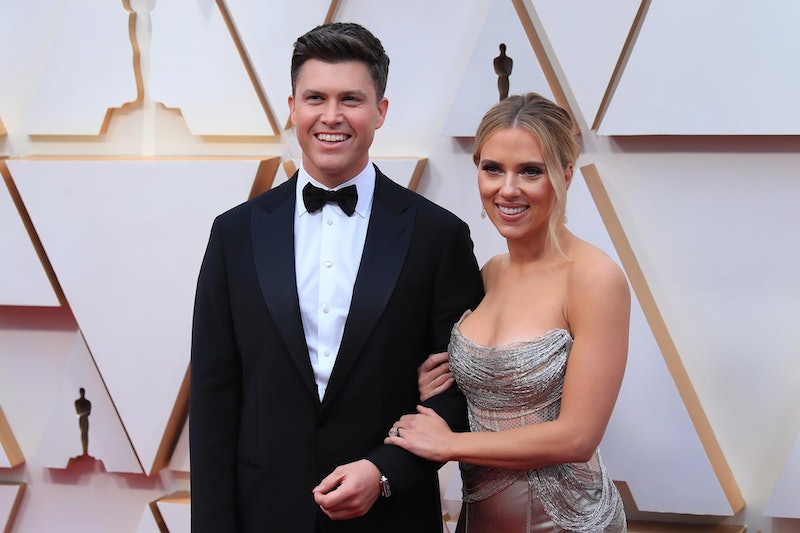 Colin Jost and Scarlett Johansson welcomed their first child together, a son named Cosmo, in August 2021, just under a year after the couple’s intimate October 2020 wedding. The Saturday Night Live star and Black Widow actor tend to keep their personal lives relatively private, but during a Sept. 30 appearance on Late Night with Seth Meyers, Jost revealed that his mother had a less-than-stoked reaction to the name they chose for their son. “My family is very supportive, always. My mom, I would say, was slightly thrown by it and didn’t quite understand it. I don’t know if she thought it was kind of like a hippie thing,” Jost told Meyers.

The 39-year-old comedian noted that his mother offered the pair a few alternative choices for Cosmo’s name upon hearing it. “She would call us. After three or four days, she’d be like, ‘Cosmo...’ And she’d be like, ‘And, now, is it final? Like, did you submit the birth certificate?’ And we’re like, ‘Oh, yeah, we did that at the hospital,’” he said. “She was like, ‘Oh, OK, interesting. Because I was reading that there’s also a name Cosimo with an “I,” so that could also be an option. Maybe you call him Cosimo, that’s his real name, but then you can call him still Cosmo.’”

His mother eventually came around to the name, but only after meeting a few other people named Cosmo around her Staten Island residence. “She would call, and she would say, ‘I met someone — they said their uncle’s name is Cosmo, so it is OK,’” he recalled, though her acceptance came a little late. “I was like, ‘It’s locked in.’”

Page Six reported that Johansson was pregnant back in July, but Jost confirmed her pregnancy at a comedy show in August 2021, telling the audience: “We’re having a baby. It’s exciting.” However, fans were shocked when Cosmo’s birth was announced the next day via Jost’s Instagram. “Ok ok we had a baby. His name is Cosmo. We love him very much. Privacy would be greatly appreciated,” he wrote, before joking, “For all inquires please contact our publicist @chethinks [SNL’s Michael Che].”

At the time, a source told People that the couple is “so happy and madly in love with the baby,” aka Johansson’s second child, as she had now-7-year-old Rose Dorothy with her ex-husband Romain Dauriac in 2014. “They wanted this child who will fit right into their lives since they already have her daughter,” said the insider. “They are an awesome couple, both talented, smart, and clever. They will be the best parents. Colin is considerate and helpful in everyday life, so adding one more to the mix should be fine. The baby is the best thing ever for both of them.”

More like this
Michael B. Jordan Tackled His "Public Breakup" With Lori Harvey On 'SNL'
By Brad Witter
Who Is Pete Davidson Dating? He & Chase Sui Wonders Got Caught Kissing
By Jake Viswanath
RHOP’s Robyn Dixon Explained Why Juan Paid For Another Woman's Hotel Room
By Brad Witter
Who Is Allison Williams Dating After Her Divorce? She’s Engaged With A Child
By Jake Viswanath
Get Even More From Bustle — Sign Up For The Newsletter
From hair trends to relationship advice, our daily newsletter has everything you need to sound like a person who’s on TikTok, even if you aren’t.