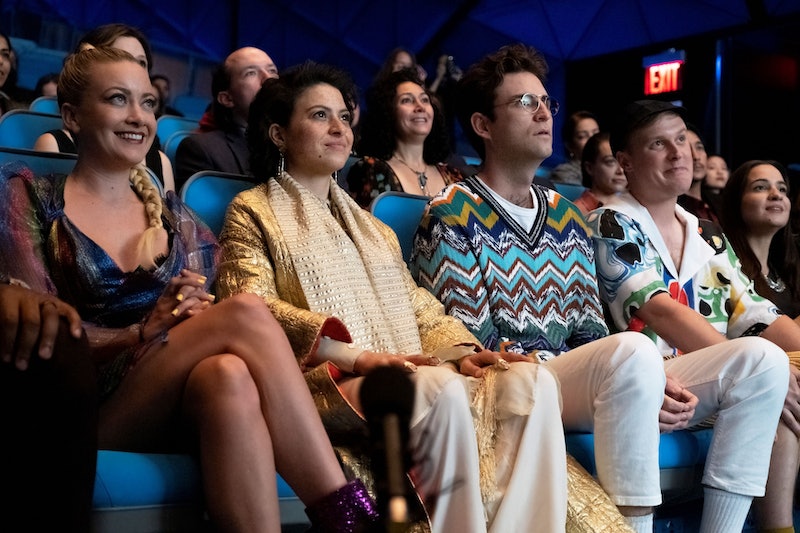 Since 2016, Search Party has followed the misadventures of four self-absorbed, self-sabotaging 20-somethings. It was a particularly inventive show, beginning as the characters attempt to solve the mystery of a missing acquaintance and essentially remaking itself each season with a new story. Throughout the series, Dory (Alia Shawkat), Drew (John Reynolds), Elliott (John Early), and Portia (Meredith Hagner) have found themselves embroiled in a semi-accidental murder, a subsequent cover-up, an ensuing trial, and at the mercy of a psychotic stalker. Season 5, premiering on Jan. 7, will open yet another chapter as Dory teams up with an outlandish tech billionaire named Tunnel Quinn (Jeff Goldblum) for a questionable business partnership. But it also marks an ending: In November 2021, HBO announced that Season 5 of Search Party — which aired its first two seasons on TBS before moving to HBO Max — would be its last.

Speaking to E! in a recent interview, Early said that he’s "still very sad” the show is over. “It was the best job I'll ever have. I can't believe I got to be on something that's as funny as it is,” he said. Hagner echoed these sentiments, adding that she’s “not doing well” now that the end has arrived. Reynolds said that “it's one of those things where I'm grieving and I don't know it,” while Shawkat expressed her gratitude for getting to play a character like Dory for five seasons. "She's a character who changes so much. I think it's a rare opportunity as an actor on a TV show."

As difficult as it is to say goodbye, Hagner praised creators Sarah-Violet Bliss and Charles Rogers for writing a final season that she describes as "a sh*t show of epic proportions." Reynolds agreed: "Every season gets campier and campier, and this [season] definitely blows this up in a fun, good way,” he said.

As for what’s next, Shawkat is set to star in the upcoming FX series The Old Man alongside Jeff Bridges, John Lithgow, and Amy Brenneman. The show stars Bridges as the titular “old man,” who left the CIA decades ago and is living off the grid when an assassin arrives to try to take him out, forcing him to revisit his past. Early will appear in the AppleTV+ series The Afterparty, which features him and Tiffany Haddish as detectives investigating a murder and unravels the mystery through a different witness’ perspective each episode. Hagner is working on another AppleTV+ mystery series, Bad Monkey, hailing from Ted Lasso co-creator Bill Lawrence and following a restaurant inspector (Vaughn) who’s pulled into a “world of greed and corruption” after a tourist finds a severed arm while out fishing. Reynolds has yet to announce his next project.

More like this
The 'Gossip Girl' Reboot Creator Is “Looking For A New Home” To Air A Potential Season 3
By Brad Witter
A New 'And Just Like That' Table Read Pic Confirms A Key Character's Return
By Jack Irvin and Grace Wehniainen
The 8 Best Aidan Shaw Moments On 'Sex And The City'
By Grace Wehniainen
'The Last Of Us' Video Game Revealed Tess’ Fate In The HBO Series
By Brad Witter
Get Even More From Bustle — Sign Up For The Newsletter
From hair trends to relationship advice, our daily newsletter has everything you need to sound like a person who’s on TikTok, even if you aren’t.