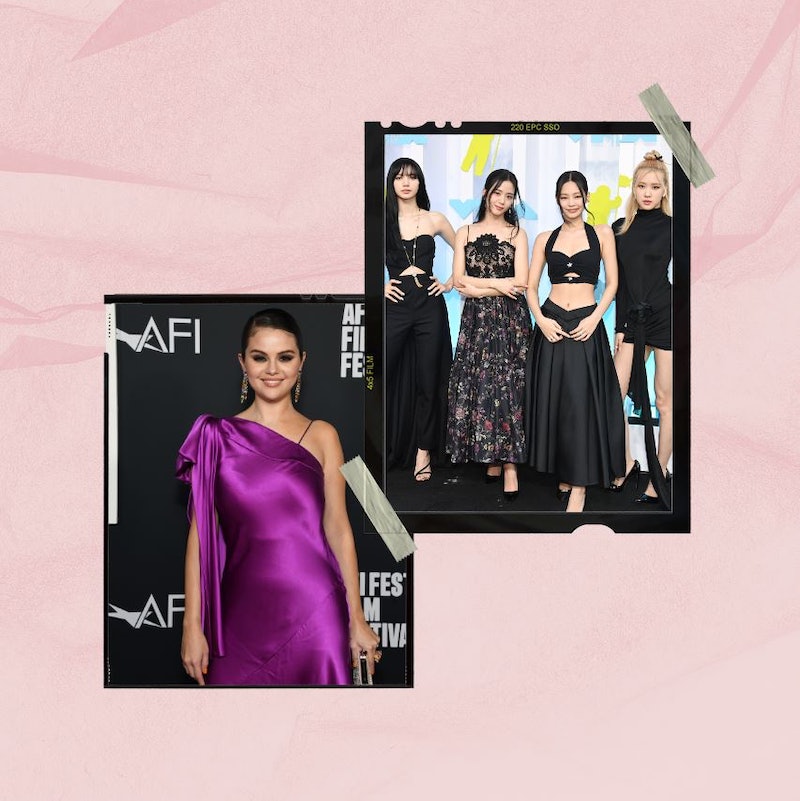 When you’ve got Blackpink in your area, take a cue from Selena Gomez and show up. The “My Mind & Me” singer recently got the chance to meet up with her “Ice Cream” collaborators, Jisoo, Rosé, Jennie, and Lisa, thanks to their ongoing Bour Pink Tour, and needless to say, she took it. The five artists were all finally in the same place, more than two years after they released their 2020 hit amid travel restrictions and shutdowns.

Gomez posted three photos of the fivesome on Instagram on Nov. 26, nodding to “Ice Cream” lyrics with her caption, “Selpink chillin.” In each, the Blackpink members are still clad in concert looks, hinting that Gomez was backstage at one of their shows. Soompi suggested the meetup was in Newark, where Blackpink performed on Nov. 14 and 15, while fans on Twitter speculated that it was in Los Angeles, the last city in the tour’s North American leg, where they had concerts on Nov. 19 and 20.

Wherever they met up, numerous fans seemed to delight in the long-awaited moment. “I love this view soo mucchh,” one commented on Gomez’s post. Another wrote, “I M CRYING MY DREAM !!!!” and still someone else added, “SO GLAD YOU GUYS FINALLY MET IN PERSON.”

Over on Twitter, though, the stans were a little more restless. Many felt deprived of something special — namely, a live performance of “Ice Cream.” The fact that all five women were there and Blackpink was already performing… well, what more did they need? Several confused Twitter users asked just that, like the one who wrote, “now what stopped u from performing ice cream[?]”

Numerous other fans let it be known that they were crushed not to see the performance happen. “selena was at the blackpink LA concert??? AND THEY DIDNT PERFORM ICE CREAM....life’s so unfair,” one person tweeted. Apparently feeling equally dramatic, someone else wrote, “Selena really went to see blackpink and still didnt give us an ice cream performance, she loves to see us suffer.”

A handful of Blinks struck a more optimistic note and looked forward to hopefully seeing a Selpink performance of the hit “one day.” As a Twitter user put it, “we finally got photos of blackpink and selena gomez together so now the final thing we need is to see selpink perform a live version of ice cream.” So far, Gomez and Blackpink haven’t said anything about when or if that will happen, but Rosé did show her love for the Only Murders in the Building star by sharing the post to her Instagram story and adding the heart-hands emoji.

As for now, it’s hard to blame fans for being disappointed. When the five had to work on the August 2020 “Ice Cream” music video separately, Gomez talked about their joint potential in behind-the-scenes footage. “I wish that I was there with them,” she said. “I kept saying that, because I guarantee you there’s this energy that we could have if we could be in the same place.”

More like this
Selena Gomez Dismissed Trolls' Comments About Her Body After The Golden Globes
By Stephanie Topacio Long
Selena Gomez Confirms She's Single Amid Drew Taggart Dating Rumors
By Martha Sorren, Jake Viswanath and Jack Irvin
Britney Spears Shares & Deletes Photos Of Justin Timberlake From 22 Years Ago
By Jake Viswanath
19 Photos Of Lisa Marie Presley With Elvis, Her Kids, & More
By Alyssa Lapid
Get Even More From Bustle — Sign Up For The Newsletter
From hair trends to relationship advice, our daily newsletter has everything you need to sound like a person who’s on TikTok, even if you aren’t.