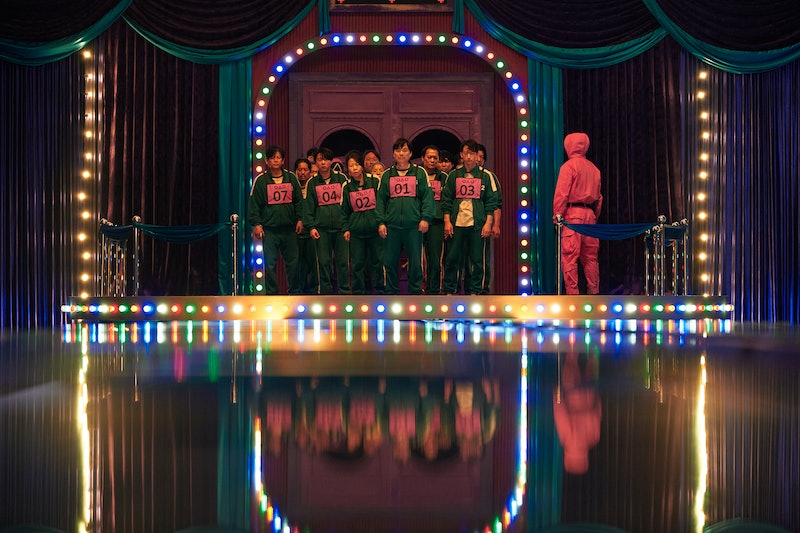 Spoilers ahead for Squid Game Season 1. As the penultimate game in Squid Game, the glass bridge of death was always guaranteed to be high-stakes. Add in player betrayals and the interference of a sadistic live audience, and you’ve got one of the show’s most memorable trials. While the players leaped, fell, and sometimes pushed each other en route to the other side, the masked VIPS for whom Episode 7 is named looked on with passive amusement. If you’re into the Hunger Games vibes throughout the show, the VIPS are very Capitol — out of touch and bizarrely dressed for the fatal games before them.

Though Squid Game creator Hwang Dong-hyuk has been working on his story since 2008, he also pointed to more recent influences on the plot over the past decade-plus, including one surprising source of inspiration for the VIP cohort. In an Oct. 10 IndieWire interview, Dong-hyuk pointed to the time after the advent of cryptocurrency and the “rise of IT giants” that are “restructuring our lives.” He stated, “Donald Trump became the president of the United States, and I think he kind of resembles one of the VIPs in the Squid Game.”

Though the series writer-director didn’t specify which VIP he had in mind, Dong-hyuk elaborated on the connection to the past The Apprentice host, comparing the former president’s administration to the contests we see onscreen. “It’s almost like he’s running a game show, not a country, like giving people horror,” he told the outlet. “After all these issues happened, I thought it was about time that this show goes out into the world.”

The VIP we spend the most time with is a tiger-masked figure who’s so desensitized to death that he isn’t all that preoccupied with the outcome of Game 5 at all. Rather, he’s more interested in the waiter serving him (which is actually Jun-ho in disguise). “If you don’t do what I say,” he tells the undercover detective before leading him to a private room, “I will kill you before I leave.” Jun-ho, though, turns the tables and unmasks the VIP before demanding he reveal everything he knows about the games. That intel leads Jun-ho to the fateful confrontation with his brother, the Front Man.

By the end of the encounter, the VIP has “collapsed,” the games’ security discover, but isn’t actually dead — he and his friends will live to see another day and another round of games, if they want and should Squid Game Season 2 ever happen.

Beyond Jun-ho’s terrifying encounter, there are plenty of other memorable VIP moments. Remember the lion-masked mansplainer who huffs when he misattributes a saying to Shakespeare? And it’s hard to forget the deer-masked cigar smoker who declares, “That’s no fun!” when players prove themselves to be more intelligent than the game. Oh, yeah, and they all have tiny little opera glasses to better see the life-and-death decisions unfolding before them. The VIPs’ petty conversation underscores the brutality of what’s happening on the bridge — making Squid Game’s masked characters that much more disturbing.