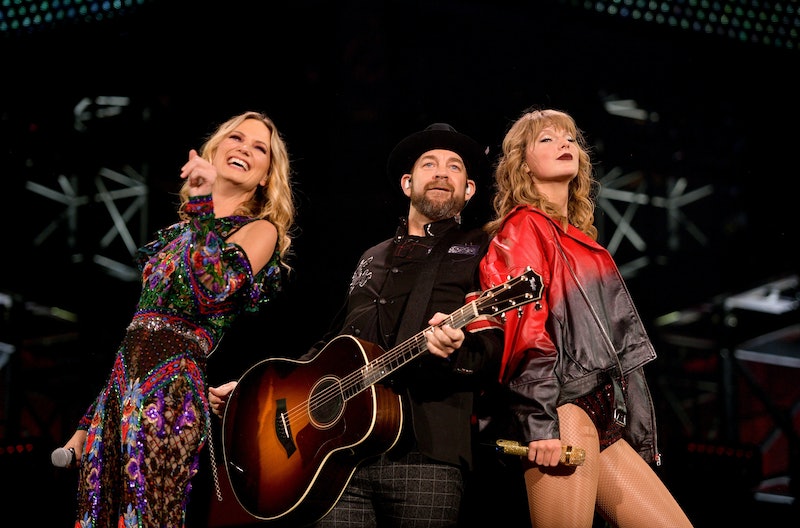 Taylor Swift’s new album Red (Taylor’s Version), the re-recording of her Grammy-nominated 2012 album, doesn’t just include fresh takes on the hits you know and love. Similar to the re-recording of her sophomore album Fearless, Red (Taylor’s Version) includes nine new “From the Vault” songs that were written during the original recording sessions but never officially released. However, Swift’s new vault songs “Better Man” and “Babe” may sound familiar to some fans. That’s because you’ve likely already heard them — they just weren’t sung by Swift.

If you couldn’t tell from their inclusion on Red (Taylor’s Version), “Better Man” and “Babe” were written sometime in 2011 or 2012. Swift co-wrote “Babe” with Train lead singer Pat Monahan, and she penned “Better Man” by herself. Neither song made the original Red album, but years later, Swift decided that if they couldn’t be on her album, they could still go to other artists.

In 2016, Swift gave “Better Man” to Little Big Town, who recorded it as the lead single of their 2017 album The Breaker. Swift ended up winning the Country Music Award for Song of the Year for writing it and earning a Grammy nom for Best Country Song in the process. In June 2018, Swift gifted “Babe” to Sugarland but opted to keep herself as a featured artist on the single, lending background vocals and starring in the duo’s music video as “the other woman.”

Both Versions Of “Better Man”

Both Versions of “Babe”

While she may have given the songs to other country artists, Swift still embraced both “Better Man” and “Babe” as her own creations. The singer played both tracks on her 2018 Reputation Stadium Tour, performing an acoustic version of “Better Man” in Nashville and having Sugarland surprise the crowd in Dallas to perform “Babe” with her onstage. After announcing that she would re-record her first six albums after her former label Big Machine Records sold her masters to Scooter Braun in June 2019, Swift told Ryan Seacrest in a radio interview that she wanted to listen to fans’ ideas for the re-recordings, one of which included “Better Man.”

READ NEXT: The History Of Taylor Swift’s “All Too Well”

“Some of the things that they’ve said that are really interesting to me are like, I wrote the song ‘Better Man’ for Little Big Town,” she explained. “They took that song all the way ... but it was originally going to be on the Red album, so the fans are like, ‘Maybe she’ll put ‘Better Man,’ her version, on the Red album?' And I was like, ‘That’s an amazing idea.’ So I’m going to be listening to what they are saying.” Swift kept her promise.