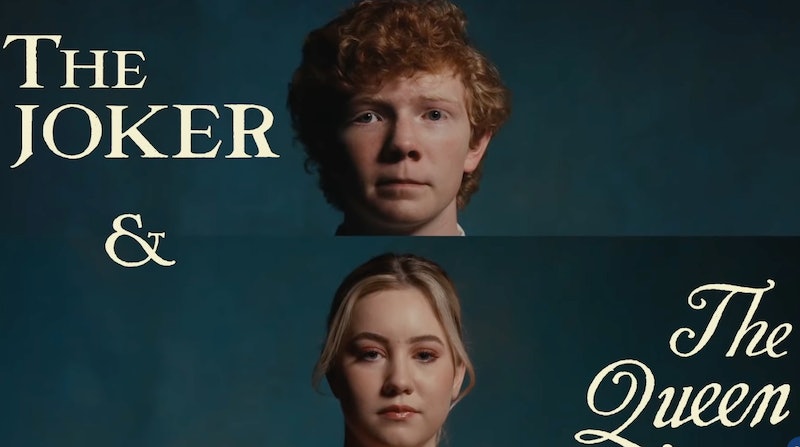 Taylor Swift and Ed Sheeran are all grown up. Well, the kids who played them in their 2013 music video for “Everything Has Changed” are, and those aged-up actors are now starring in the video for Sheeran and Swift’s “The Joker & The Queen.” Nine years later, young actors Jack Lewis and Ava Ames are back to bring to life Sheeran and Swift’s latest collaboration, a remix of Sheeran’s 2021 track from his equals album. The new video, which marks the superstars’ fourth collab, premieres Feb. 10 at 7 p.m., and it’s guaranteed to make Swifties feel completely ancient.

As fans will recall, the “Everything Has Changed” video features Ames and Lewis as a young Swift and Sheeran as they meet for the first time in elementary school and immediately become best friends. They sit at lunch together, battle with musical instruments, take the bus home from school, and even bust some moves at a school dance. It was the beginning of a love story they’d tell their grandkids 70 years from now, but the video’s sequel shows they took a different path.

After nearly a decade, Ames and Lewis are now high schoolers in “The Joker & The Queen” video. The former friends are not nearly as close as they once were, even avoiding each other at parties.

Sheeran has been teasing Swift’s remix of “The Joker & The Queen” for months, almost since the release of his equals album in October 2021. He started by leaving several Easter eggs hinting that he was collaborating with the “Style” singer once again, including a direct mention of Swift in his “Overpass Graffiti” video. Swift, true to her title as the queen of Easter Eggs, also gave a couple sly hints, including drawing the equals sign in a cake in her “I Bet You Think About Me” video. Sheeran finally confirmed that Swift was the artist on his remix at the 2022 BRIT Awards on Feb. 8, where he performed a solo rendition of the song.

This collaboration is the first one where Swift is billed as the featured artist rather than a main artist. After “Everything Has Changed,” the longtime friends teamed up with Future in 2017 for Swift’s Reputation hit “End Game,” where they all showed off their rap game. Sheeran also appeared on “Run,” a “From the Vault” track from Red (Taylor’s Version) that was the first song they ever wrote together, even prior to “Everything Has Changed.”