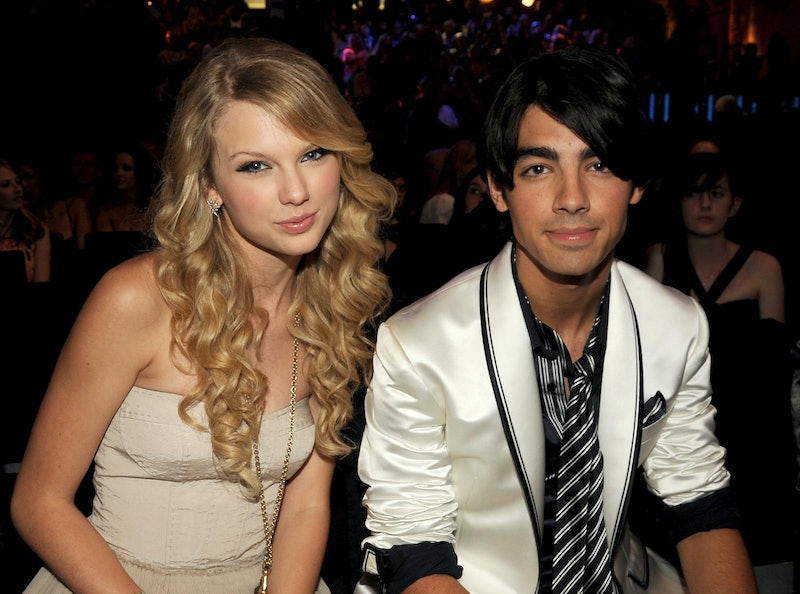 Taylor Swift and Joe Jonas were one of the most iconic celebrity couples of the early aughts, and even though they've both moved on, the pairing is still inspiring song lyrics a decade later. Shortly after the release of her eighth studio album, Folklore, fans noticed that Taylor Swift's lyrics on "Invisible String" include a shoutout to Joe Jonas and Sophie Turner, in which the singer revealed that she is on good terms with her ex-boyfriend.

In the song, which is about how Swift feels her current relationship with Joe Alwyn was destined to be, Swift reflects on her past relationship and the path that led her to Alwyn. "Cold was the steel of my axe to grind / For the boys who broke my heart," Swift sings in the third verse. "Now I send their babies presents." While she hasn't explicitly revealed that the line was inspired by Jonas, back in February, Us Weekly confirmed that he and Turner are expecting their first child together.

Swift and Jonas briefly dated back in 2008; shortly after they broke up, Swift revealed during an appearance on The Ellen DeGeneres Show that she had written "Forever and Always" about their romance and split. "There's one [song] that's about that guy, but that guy's not in my life anymore unfortunately," she said at the time, about Jonas.

"Someday I'm going to find somebody who's really, really right for me," she said, adding, "When I find that person that is right for me, and he'll be wonderful, and when I look at that person, I'm not even going to be able to remember the boy who broke up with me over the phone in 25 seconds when I was 18." (She later clarified that it was actually a 27-second phone call.)

Despite the public drama between them at the time, by 2015 Jonas and Swift were friendly once more. "She’s great. We’re friends," Jonas told Access Hollywood at the time about where things stood between them. "I think in this industry, you meet a lot of people and you stay in touch. Obviously, it’s tough to be friends with people that are always constantly traveling, but yeah, we’re cool."

Around the same time, Swift told Vanity Fair that she was even OK with Jonas dating her friend, Gigi Hadid, explaining that she valued her female friendships more than her past romance with the musician. "We even have girls in our group who have dated the same people," she explained of her "squad" in an interview. "It’s almost like the sisterhood has such a higher place on the list of priorities for us. It’s so much more important than some guy that it didn’t work out with."

In 2019, Swift proved that she and Jonas had officially buried the hatchet when she apologized for revealing the details of their 2008 breakup while reflecting on the "most rebellious" thing that she had ever done. "Probably when I like put Joe Jonas on blast on your show," Swift said on — what else — The Ellen DeGeneres Show. "That was too much, that was too much. I was 18."

About a month later, Jonas said on ITV's Lorraine show that while it "did feel nice" to get Swift's apology, the pair had both long moved on from their contentious breakup. "It's something that I was probably feeling pretty bad about when I was younger," he explained. "At the end of the day, I've moved on. I'm sure Taylor's moved on. It feels nice. We're all friends. It's all good. We were so young." And now that they're older, she's buying his baby presents — time, wondrous time, indeed.