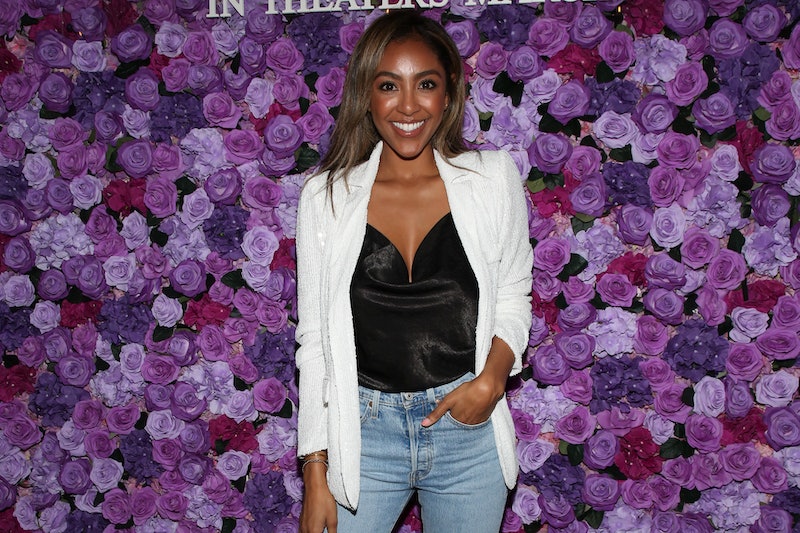 Now that Tayshia Adams has made her grand entrance on The Bachelorette, she celebrated her debut on Instagram with a nod to her status as Clare's mid-season replacement. The final moments of the Oct. 27 episode showed Tayshia wearing a red bikini and emerging from a pool at the Palm Springs resort where the season was filmed. "What is next?" one of the contestants can be heard asking just moments before Tayshia's debut. Shortly after the episode aired, she answered that exact question.

"You rang...?!" Tayshia wrote on Instagram alongside a winking emoji and a photo of herself posing in a white, feathered corset. Though she didn't share anything else about her role on the season, Tayshia's best friend Jamie Artsis posted a series of videos of the former phlebotomist celebrating the big moment on her Instagram Story.

"That's my best friend!!!" Jamie wrote along with a video of Tayshia watching herself appear on TV at the end of last night's episode. Along with a short clip of the two celebrating at home, Jamie joked about one of the reasons the new Bachelorette was so excited by her sexy poolside debut. "When your t*ts are ON POINT on national television," she wrote, pairing her caption with footage of Tayshia dancing around the living room to Ciara's "Level Up."

In August, multiple outlets reported that Tayshia would replace Clare as the Bachelorette after the latter decided to leave the show just a few weeks into filming. As fans have seen, Clare fell hard and fast for football player-turned-model Dale Moss, and she reportedly departed from her season to avoid leading the rest of the men on. Even though it's been months since the news first broke, Tayshia's Instagram post is the first official comment she's made about stepping in as the Bachelorette.

Tayshia also appeared on a September episode ofThe Bachelor: The Greatest Seasons — Ever!, where she opened up about how seeing Rachel Lindsay fall in love with husband Bryan Abosolo inspired her to try and find love on the reality franchise herself. "I think that's what encouraged me to go on it," Tayshia told host Chris Harrison at the time. "Because I feel like she was so true and authentic to herself and, at the end of the day, she got her person. She is happily married now, and she got her fairy tale ending, and that's what I wanted. So, she gave us hope."

In addition to watching Rachel find love on The Bachelorette, Tayshia revealed during the Oct. 22 episode of her podcast, Click Bait, that she applied for Colton Underwood's season of The Bachelor as a way to start over after her divorce from ex Josh Bourelle. "In my mind, divorce isn't a thing. Marriage is forever," she said, explaining that she and Bourelle went to couple's counseling before they split. "You try as hard as you can, but you can't force someone to love you. So, if you do that for a couple of months and it's still not working, you're trying to do everything you can and the other person's not … You gotta go your own separate way."

"That's why I was so happy and content to go look for love when I went on The Bachelor because I knew I did everything. That was a chapter closed," Tayshia continued. "It's a very different scenario when there's still, like, open doors. People never know the true story. I was ready for [love]." And now, it seems Tayshia is more than ready to embark on a brand new journey to find love. This time, as the Bachelorette.