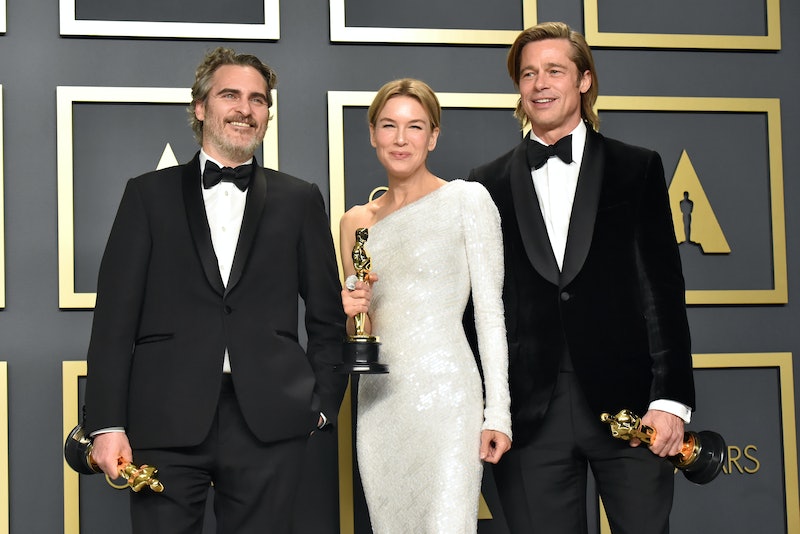 While many major awards shows have opted for virtual or audience-free events due to concerns about the ongoing coronavirus pandemic, the Oscars are planning an in-person awards ceremony in 2021, according to Variety. A representative for the Academy of Motion Picture Arts & Sciences and ABC told the outlet that "the Oscars in-person telecast will happen" on April 25, 2021, if everything goes according to plan. Although they declined to reveal any of the safety protocols that will be put in place at the 3,400-seat Dolby Theater in Los Angeles, a publicist close to the Oscars confirmed that the Academy has already begun planning the ceremony.

"The Academy has done a walkthrough of the Dolby recently to see all the multiple options," they told Variety. Like the rest of the film industry, the Oscars have been impacted by COVID-19 concerns. In June, for example, the Academy announced that they decided to postpone the 2021 ceremony — which was originally scheduled for February 28 — until mid-April.

As a result, the nominations and voting periods were also extended so that any film released between Jan. 1, 2020, and Feb. 28, 2021, will be eligible. Most film and TV productions were shut down in March to prevent the spread of the virus, and many crews weren't able to restart filming until summer. Moving the eligibility dates allowed filmmakers more time to finish and release their projects in the safest way possible.

"We find ourselves in uncharted territory this year and will continue to work with our partners at the Academy to ensure next year's show is a safe and celebratory event that also captures the excitement of the opening of the Academy Museum of Motion Pictures," ABC Entertainment president Karey Burke said in a March statement, per Variety. Still, because people remain at great risk for contracting the coronavirus and a vaccine is not yet available to the American public, the Oscars aren't the only major awards show reevaluating their plans ahead of the 2021 season.

In July, the Hollywood Foreign Press Association said that Tina Fey and Amy Poehler will host the 2021 Golden Globes live on Feb 28, although it's unclear whether or not the nominees will be present. Meanwhile, both the Screen Actors Guild and the Critics Choice Association told Variety that a virtual ceremony is a distinct possibility for 2021. "For our show, we're looking at a variety of options," a spokesperson for the SAG Awards said about the March 14 ceremony. "Like our colleagues at other awards shows, we are working to create an entertaining and safe show for all of our nominees."

In addition to the new safety protocols that will likely be instituted because of the pandemic, the Oscars announced new diversity requirements in September that films will need to meet to be eligible for the night's top award. Starting in 2024, Best Picture nominees must meet at least two of the four new inclusion standards, which are "designed to encourage equitable representation on and off-screen," according to the Academy. However, since the new rules won't go into effect for three more years and only impact Best Picture nominees, it's unclear what the 2021 Oscars will really look like when they air on April 25.

More like this
Twitter Is At Odds Over Taylor Swift’s Possible ‘All Too Well’ Oscar Run
By Brad Witter
Lady Gaga Will Star In 'Joker: Folie À Deux' With Joaquin Phoenix
By Jake Viswanath
Florence Pugh Won’t Discuss Harry Styles Sex Scenes In 'Don’t Worry Darling'
By Grace Wehniainen
Jennifer Coolidge Just Said The Most Controversial Thing About Legally Blonde’s “Bend & Snap”
By Maxine Harrison
Get Even More From Bustle — Sign Up For The Newsletter