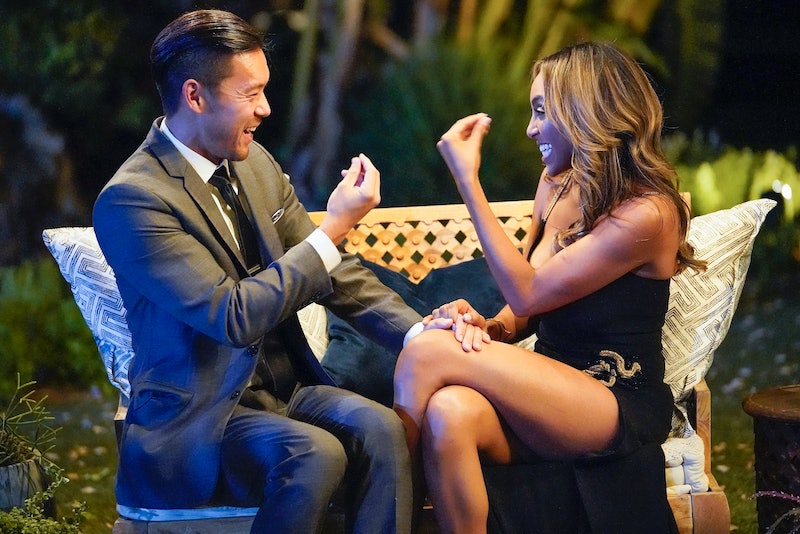 Anyone who appears on The Bachelorette is guaranteed to get a major influx of social media followers, but one of Tayshia's contestants is hoping to use his platform for a good cause. On Wednesday, Dec. 16, The Bachelorette's Joe Park documented himself getting the COVID-19 vaccine on his Instagram Story to educate his followers about the injection and the process of getting inoculated. The anesthesiologist — also known as Dr. Joe to fans of the franchise — was vaccinated at the New York hospital where he works and he shared a step-by-step guide for his followers.

"Step 1: Sign up (When you're allowed)," Joe, who wore a mask throughout his entire Story, captioned the first slide. Next, he explained that the second step is to sign a consent form (with an optional smiley face). "Step 3: Get the vaccine," Joe continued, making sure to turn the phone away from the needle for those who are squeamish. Then, "Step 4: Be monitored for 15-20 minutes" afterward to make sure you don't have any short-term reactions.

Dr. Joe also got "Tylenol for any injection site pain" as well as Welch's Fruit Snacks "for being so vewy bwave!" He finished his Story by promising that he would provide updates online "1-3 [days], 1 week, 1 month and 2 months" after getting vaccinated to share any possible side effects. Joe also illustrated just how "easy" the whole process was by including a GIF of fellow Bachelorette contestant Eazy on his post.

According to his official Bachelorette profile, Dr. Joe is a first responder who spent "most of 2020 fighting coronavirus on the front lines in New York City" and even contracted the disease himself. "During that time, it taught me so much about what's really important," he told Entertainment Weekly in November. "I would go to work, and it was obviously a very harrowing time in my life and in the lives of thousands, if not millions of other people, especially in New York City."

"Seeing so many people pass away during that time, it definitely gave me an appreciation for [life's] moments," he continued. "I had COVID and I recovered from it. And I was thankful for that because I saw plenty of people in their 40s and a couple in their 30s who didn't do as well. My family was OK for the most part, and I was just so grateful." Joe told the outlet that all of the tragedy he witnessed made him embrace his time on The Bachelorette even more. "Just to be able to go to the desert and pursue love without masks ... when I got to the show, it was like, man, this is such a beautiful thing to be out here," he said.

Because of that experience — and his ongoing work on the front lines — Joe has been using his growing platform to educate his followers about the pandemic and the vaccine. On Dec. 13, he shared an Instagram video breaking down everything people need to know about the vaccine after it was announced that it would become publicly available. "A lot of friends and family have been asking me recently about [it] and I figured some of you might be curious too," Joe said in the clip, before answering some of the most frequently asked questions.

Sadly, one thing Dr. Joe likely won't use his newfound fame for is finding love on Bachelor In Paradise when it hopefully returns this summer. "I hope I'm in a committed relationship by then!" he recently told EW. "Though I didn't unfortunately find love on this show, I realized that love is possible from this show. I think it's something you have to evaluate when [the opportunity] happens. It's hard to say now." In the meantime, it seems like Dr. Joe is committed to spreading information and love on social media.