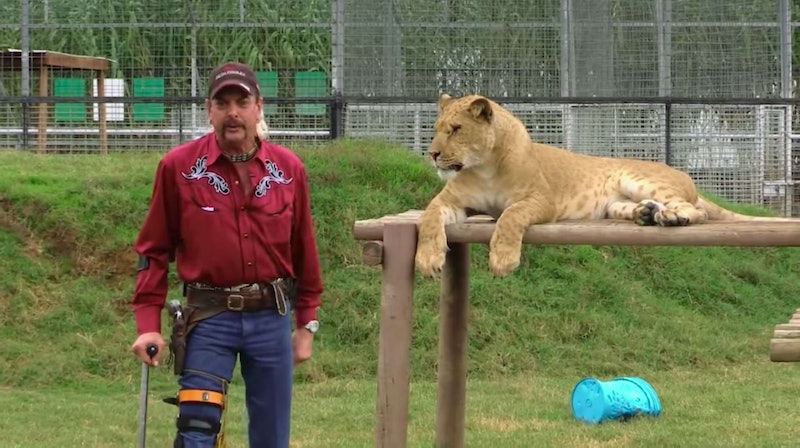 Netflix's Tiger King has taken the internet by storm. The seven-part docuseries follows Joe Exotic, the former owner of a zoo in rural Oklahoma who is known to his fans as the self-proclaimed "tiger king." While Tiger King charts Exotic's years-long rivalry with Big Cat Rescue founder and animal-rights activist Carole Baskin, that's just one layer of this stranger-than-fiction story. Throughout the series, the audience also watches as Exotic pursues a country music career, a failed presidential bid, and marriages to multiple men (and during one wedding, to two at once). He also becomes involved with a murder-for-hire plot, campaigns in a gubernatorial race, and at one point runs away from the zoo and his community.

It's Exotic's antics and ongoing presence in pop culture and politics that continue to draw audiences to the documentary — and also leading them to meme it, endlessly. Whether they're making fun of Exotic's eclectic style, Baskin's husband's mysterious "disappearance," or how we're all just barely hanging in there — like Exotic's eyebrow rings — people have had just as much fun engaging with Tiger King as they have watching it.

In the wake of its popularity, Hollywood has greenlit several upcoming series that will depict Exotic’s life and story. Peacock has announced an upcoming series based on Robert Moor’s podcast Joe Exotic: Tiger King that is set to star SNL actor Kate McKinnon as Baskin and air exclusively on the streaming platform. Additionally, Deadline reported that writer, director, and producer Ryan Murphy is developing a series for Netflix that will star Rob Lowe as Exotic. If that’s not enough Tiger King content for you, Amazon Prime Video is currently developing an eight-episode series starring Nicolas Cage as Exotic based on a Texas Monthly article about the figure. While you wait to marathon-watch those projects, read on for the very best of the many, many Tiger King memes on the internet now.

More like this
Anthony Templet Wants To “Live Normally” After Killing His Father
By Brad Witter
Move Over, 'Sunset'! The Drama-Filled Trailer For 'Selling The OC' Is Here
By Nola Ojomu
Here’s Where Kirra Hughes Is Now
By Morgan Leigh Davies
Akshay Is Still Single After Reversing His Marriage Curse In 'Indian Matchmaking' Season 2
By Kadin Burnett
Get Even More From Bustle — Sign Up For The Newsletter