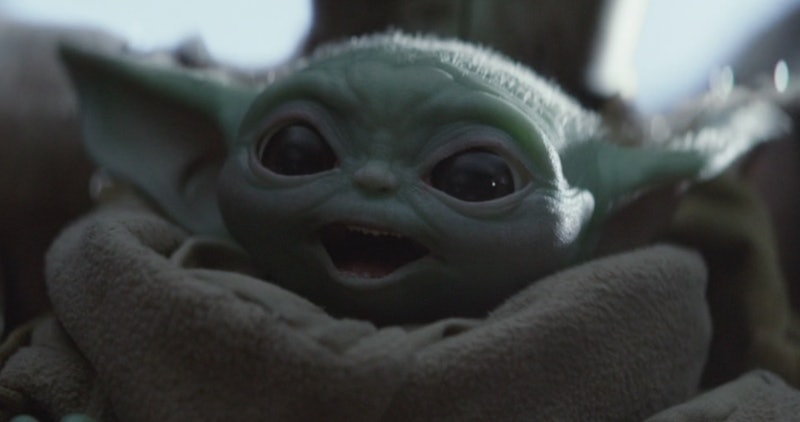 Of course, sadly, Baby Yoda himself did not receive a nomination, but The Mandalorian did receive nods for Outstanding Drama Series, Outstanding Guest Actor in a Drama Series (Giancarlo Esposito for his role as Moff Gideon), and Outstanding Special Visual Effects. And the Star Wars fans are already celebrating. While the franchise has been recognized with various Emmy nominations for its animated and short form variety offerings, The Mandalorian’s noms mark the first live-action Star Wars project to be nominated since the 1980s Ewok Adventure films, according to Deadline.

On Twitter, Mandalorian fans reacted to Baby Yoda’s prestigious recognition accordingly. Some users congratulated The Child, while others pointed out that the creature was perhaps snubbed in the Best Supporting Actor category. In sum, it appears that being punched by Jason Sudeikis and Adam Pally has proved to be fortuitous for Baby Yoda, after all.

The nominations come after Mandalorian was renewed for a second season last December. Set to debut sometime in October of this year, Season 2 will feature Rosario Dawson as Ahsoka Tano, Anakin Skywalker’s former Jedi apprentice first introduced in Star Wars: The Clone Wars. While little is known plot-wise, the new season will presumably pick up after the events of Season 1, with Mando (Pedro Pascal) embarking on a cross-galaxy journey to reunite The Child with its species.

Along with Mandalorian, other standout noms include HBO’s Watchmen, which leads the ceremony this year with 26 nods. Amazon’s The Marvelous Mrs. Maisel and Netflix’s Ozark follow behind with 20 and 18 noms, respectively. Pop TV’s Schitt’s Creek also received long-deserved nominations in various categories, such as Outstanding Comedy Series and a Lead Actress in a Comedy for Catherine O’Hara. (Awards season is Moira Rose’s favorite season, after all.) In the teen TV front, Zendaya received her first Emmy nomination for her role as Rue Bennett in HBO’s Euphoria.

More like this
Everything To Know About 'Only Murders In The Building' Season 3
By Gretchen Smail and Kadin Burnett
9 Time Catherine Cawood Was An Absolute Badass In Happy Valley
By Sophie McEvoy
'GoT' Star Emilia Clarke Says She "Just Can't" Watch 'House Of The Dragon'
By Brad Witter
This Dark 'Happy Valley' Theory Is Staring You Right In The Face
By Sophie McEvoy
Get Even More From Bustle — Sign Up For The Newsletter
From hair trends to relationship advice, our daily newsletter has everything you need to sound like a person who’s on TikTok, even if you aren’t.