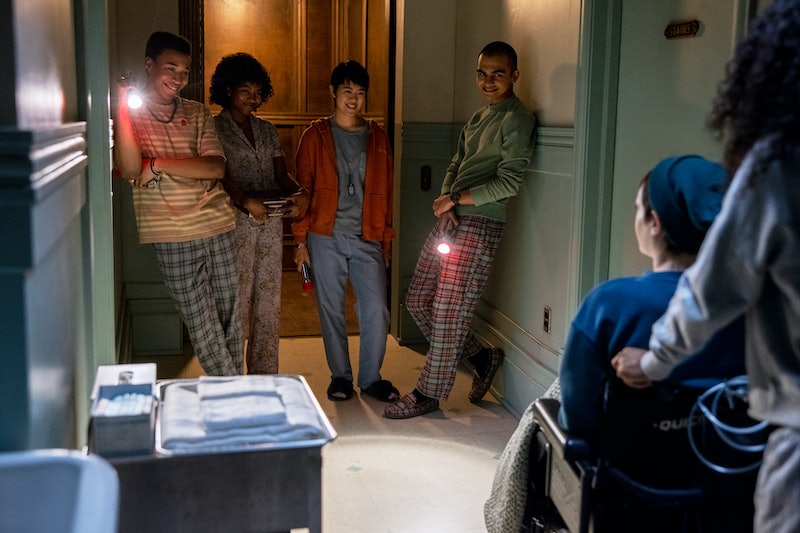 Netflix just added a new installment to its Flanaganverse, and it’s the perfect addition to your Halloween watchlist. Inspired by the Christopher Pike novel of the same name, The Midnight Club follows eight teenagers as they try to save themselves from their terminal illnesses and escape the hospice facility that brought them together. Here’s a look at The Midnight Club book vs. show differences, so you can fully appreciate Mike Flanagan and Leah Fong’s latest endeavor. Major spoilers for The Midnight Club and other Christopher Pike novels follow.

Christopher Pike’s 1994 novel, The Midnight Club, centers on five patients at Rotterham Home, a hospice facility designed specifically for terminally ill teenagers. Ilonka, Kevin, Anya, Spence, and Sandra meet every night at midnight to share stories with one another. Spence favors the gruesome, Anya the macabre. Kevin tells heartbreaking love stories, and Sandra never tells any at all.

Finally, there’s Ilonka, who shares what she believes are tales from her past lives. Every night, she dreams of a spiritual guru called the Master, whom she’s met many times, in many places. In prehistoric Egypt, they were lovers. In ancient India, they were mother and son. And in Rotterham Home, she’s certain, they are Ilonka and Kevin. But Kevin already has a girlfriend, Kathy, and time is running out for Ilonka to tell him how she feels — and what she knows about their shared past — before it’s too late.

Although the show deviates heavily from the source material, the series incorporates elements from many other Pike novels, making Netflix’s The Midnight Club feel like a proper love letter to Pike’s work. Here’s what you need to know.

Readers Might Not Recognize Some Of The Characters On Screen

The expansion of the central cast is one of the most noticeable differences between Pike’s novel and Flanagan and Fong’s series. Netflix’s The Midnight Club has eight teenagers meeting each night to tell spooky stories: Ilonka (Iman Benson), Kevin (Igby Rigney), Anya (Ruth Codd), Spence (Chris Sumpter), Sandra (Annarah Cymone), Natsuki (Aya Furukawa), Amesh (Sauriyan Sapkota), and Cheri (Adia). On the show, the kids live at Brightcliffe, not Rotterham, and are under the care of Dr. Stanton (Heather Lagenkamp) instead of Dr. White. Two more new characters — a local woman named Shasta and an orderly named Mark, portrayed by Midnight Mass alumni Samantha Sloyan and Zach Gilford, respectively — round out the series’ cast.

The Midnight Club is Flanagan’s third book-to-horror-series project. Two of his previous Netflix series, The Haunting of Hill House and The Haunting of Bly Manor, were loose adaptations of horror novels by Shirley Jackson and Henry James. The Midnight Club is a horror series, but the original novel is not, even though it’s usually marketed as one.

In the novel, the teens make a simple pact: if there is an afterlife, then the first one of them to die will do their best to contact the rest of the club from the other side. After Anya dies, however, her friends don’t receive any conclusive sign of her lingering spirit and quickly drop the subject of an afterlife.

Instead, the novel’s final chapters revolve around Ilonka and Kevin’s relationship. Kevin remembers the events of Ilonka’s stories as soon as he hears them, and, although he never tells the group that his story — about an angel who gives up his immortality to marry a mortal woman, only to have her break his heart — comes from a past life, it turns out to be another chapter in the ongoing saga of the Master and his lady love. That may be why he isn’t angry when Ilonka convinces Kathy to break up with him; he knows they’re truly meant to be together.

The Novel’s Driving Message Remains The Same, Even If It’s Toned Down For TV

Kevin’s death in the novel forces Ilonka to do a lot of soul-searching. Her memories of her past lives reveal two things. Firstly, that she and the Master may always be destined to have some cosmic error or human flaw keep them from growing old together. And secondly, that all the teens of Rotterham Home may be cursed to die young because of their own mistakes. All of them, that is, except for Kevin.

You see, Anya’s boyfriend threw a clay statue of the two of them after he walked in on her with another boy, and the leg that broke off of the statue was the same one Anya would later have amputated to fight her bone cancer. After hearing Anya’s story, Ilonka dreamed of a past life in which she died from a stab wound to the stomach — the very place her cancer first grew in her present life.

Then there’s Spence, who tells everyone that he has a brain tumor until he develops Kaposi sarcoma, which reveals that he is actually dying of AIDS. As it turns out, Spence was diagnosed while in a relationship with a boy named Carl. He never told Carl that he was sick, for fear of losing him. Spence now blames himself for Carl’s death from AIDS, even though he can’t be certain which of them first contracted HIV. He believes it can’t have been Carl, because “he was never promiscuous,” but Spence himself had only had one other boyfriend before they met.

It’s during that conversation that Ilonka reveals the whole of what she has learned from glimpsing into her past lives. From the novel:

“I think [Kevin] chose to come [to Rotterham] to teach me what I had to learn. To teach me what the Master has been trying to teach me in every life.... I think I am here — we are all here — to learn divine love. To love the way God loves us.”

Although Ilonka does her best to convince Spence that he shouldn’t blame himself for Carl’s death, she never actually tells him that he isn’t to blame for contracting AIDS in the first place. In fact, she makes Spence’s diagnosis out to be a good thing, because it allows her to offer to share whatever divine judgment might come his way in the afterlife. It’s problematic, to say the least.

The Netflix series takes a different, more progressive tack with regard to Spence’s illness. He does not hide the fact that he has AIDS, and everyone at Brightcliffe accepts him for who he is. No one is afraid that he will give them HIV.

When Spence calls Sandra, a devout Christian, out for evangelizing, he shares how his whole religious community — down to his own parents — shunned him when they learned that he was gay. She proceeds to write a story about a young gay college student who gives his own life to save his boyfriend, as an apology. She later apologizes to Spence, telling him that she thinks God loves everyone with no strings attached, and therefore Christians should do the same.

There’s no evidence at all that Rotterham Home is haunted, aside from some missing toothpaste and a cold spot. Brightcliffe, however, is most definitely haunted. Not only do the menacing ghosts of the house’s original owners appear to several of the teens, but the hospice also shelters a shadowy being that stalks the patients who are closest to death. Throw in a creepy cult, a blood ritual, and a Guinness World Record for the most jump scares in a single TV episode, and you have a horror series that’s very concerned with all manner of death — and what comes after.

Ilonka And Kevin Aren’t Soulmates On Screen... But They Do Get A Happy Ending

Netflix’s The Midnight Club scraps Ilonka and Kevin’s love story almost entirely. There’s no mention of the Master or their past lives, aside from a brief moment where both admit that they feel as if they know one another. Instead of time-traveling in their dreams, Ilonka and Kevin are the two patients who most frequently find themselves slipping into Brightcliffe’s past, in all its sepia-toned glory.

That’s not to say these two young lovebirds don’t end up together, however. After Kevin breaks up with his girlfriend — yes, he does it himself in the series — he and Ilonka share a brief kiss in the final episode.

Only One Story From The Book Appears In The Show

There are plenty of stories to go around in The Midnight Club series adaptation. In addition to the history of Brightcliffe, viewers get to enjoy stories from all but one of the teens, beginning with Natsuki’s Guinness World Record-holding jump-scare fest. But only one of the stories on the Netflix series also appeared in the novel: “The Two Danas,” Anya’s story from episode two, appears in Pike’s novel as “The Devil and Dana.”

Flanagan and Fong’s adaptation turns plots from six of Pike’s other novels — The Wicked Heart, Gimme a Kiss, See You Later, Witch, Road to Nowhere, and The Eternal Enemy — into the stories that the eight teenagers share. Three more Pike novels — The Visitor, Spellbound, and The Starlight Crystal — show up as stories shared by an older generation of Midnight Club members, and the shadowy entity that stalks Brightcliffe’s patients comes from Pike’s 1989 novel, Remember Me. Characters who do not appear in the Midnight Club book take their names from other Pike novels, such as Amesh (The Secret of Ka), Cheri (Spellbound), and Shasta (The Yanti). All in all, Pike fans have much to look forward to in The Midnight Club, even if it isn’t a 1:1 adaptation of the original story.

The Midnight Club is streaming now on Netflix.